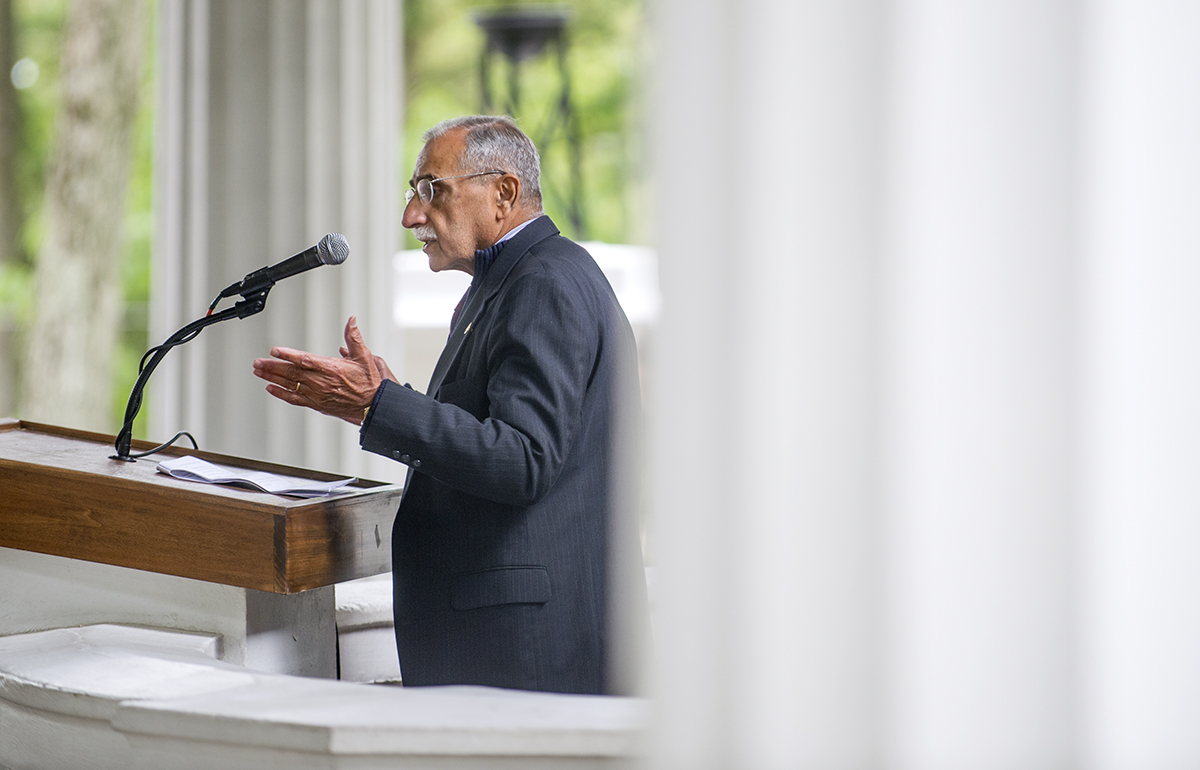 Rohinton Rivetna delivers his interfaith lecture on Zoroastrianism and the origins of monotheism Tuesday, June 27, 2017 in the Hall of Philosophy. DAVE MUNCH/PHOTO EDITOR

If every person in the world had to fill out paperwork, and check a box noting their religion, about 55,000 would check “other” and subsequently write “Zoroastrianism” on the line.

As his title suggests, Rohinton Rivetna, founding president of the Federation of Zoroastrian Associations of North America, is one of them.

Rivetna discussed the monotheistic faith Tuesday afternoon in the Hall of Philosophy, in his speech “Zoroastrianism and How It Shaped the Judeo-Christian and Abrahamic Concept of God,” part of Week One’s Interfaith Lecture Series, themed “Inventing God? A Brief History of Religions.”

“Some of you might have heard that we are relics of antiquity, but we are here to assure you that of the small numbers, we are here,” Rivetna said.

Before connecting Zoroastrianism with the Abrahamic traditions, though, he made sure audience members understood the elements of his faith, which originated in 1700 B.C. Iran under prophet Zoroaster. Believers in Zoroastrianism are said to have a “reverence for creation,” regarding seven natural elements as highly important — plants, animals, earth, human beings, air, waters and fire. However, at its core is a loyalty to people.

“We are enjoined to live a good life in the service of others and to make this world a better place for all of us,” Rivetna said. “It’s also a reflective faith given to free will and joy. It’s not a prescriptive faith.”

Members strive to embody specified character traits: good thought, justice and truth, dominion, and justice and serenity. They were established after man’s first exposure to the concept of good and evil.

“Man was striving in this world for perfection and completeness,” Rivetna said. “He did not promote the idea of renunciation, celibacy or deprivation. His trust was for happiness both within oneself and promoting harmony.”

This trust comes from the Zoroastrian idea of divinity within oneself, said to be “much like a conscience.” The faith promotes the idea of knowledge between right and wrong always being with us. This is a common attribute between all individuals, everyone connected in their ability for discernment.

Zoroastrians operate with many symbols, and “the chief among those is light,” Rivetna said. God is symbolized by the eternal fire burning in a Zoroastrian temple, and children’s birth is symbolized by the lighting of a single lamp representing a new soul. And sometimes the faith is all about the numbers: in order to be respected, a newly ordained priest must memorize 72 chapters of the sacred Yasna text.

“In the season of festivals, everybody in our community comes together as an equal,” Rivetna said. “We are required to bring something to donate such as our time, talent or treasure.”

“Jashun” is another popular feast, of which Rivetna spoke highly.

“In the presence of divinity, we place all the elements of creation around the fire … all that is placed around as a constant reminder that we are reverent to the environment and reverent to creation,” he said. “This happens on all joyous occasions.”

But even outside of the established, ritual-based religion, Rivetna said there are ties to the Abrahamic faiths. He linked this mostly with five “original ideas” with similarities to Zoroastrianism: one supreme, loving God, the concept of resistance of the soul, heaven and hell, the idea of a savior for good over evil, and revelation.

“Morgan Freeman prepared a series (“The Story of God”) about all of these different religions,” Rivetna said. “He said in that segment he felt like a follower of Zoroaster himself. In other words, all these things are nothing new to him. It was all there in his mind.”

In the end, Rivetna is passionate about an understanding between these religions in order to ensure respect.

“We have to look within ourselves,” he said. “The transformation we need to make is to make interfaith intrafaith and finally be in harmony with each other.”