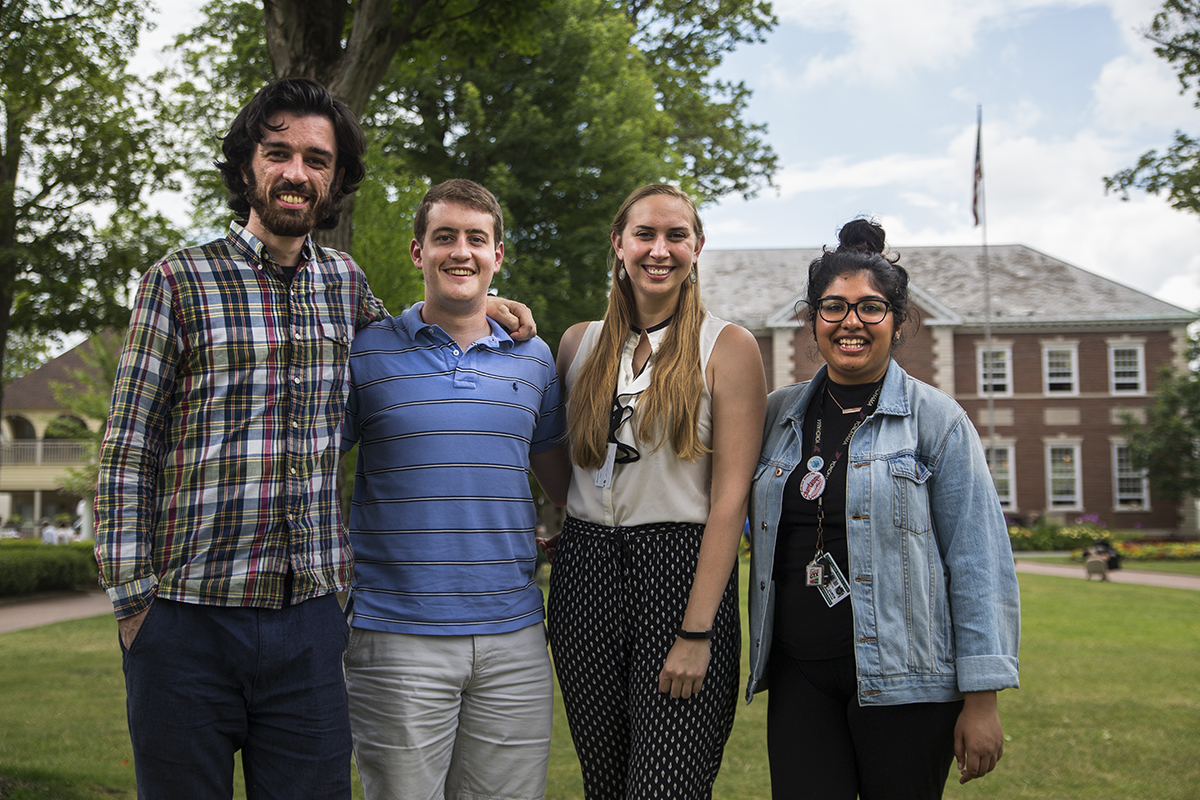 Omar Bayramoglu and Nikhat Noorani are folding a blue Power Rangers bed sheet they were sitting on before starting their event “Jew, Christian, Muslim … Ask Us Anything” July 20 on Bestor Plaza.

“Look, after like my first month, I was over there training people at Banana Republic, so … ,” Bayramoglu replied.

“After my first week … ,” Noorani countered.

“I was there for one minute, and someone was like, ‘Train this person,’ and I was like, ‘OK,’ ” chimed in Zoë Garry.

Quick-witted banter is common among Bayramoglu, Noorani, Garry and Will Hall, whether it’s about retail  jobs or a higher power. The four are this year’s coordinators for the Abrahamic Program for Young Adults, an interfaith organization designed to engage young adults from ages 16 to 22 through dialogue, social activities and table talks.

Noorani is APYA’s female Muslim coordinator, attending the University of Kansas and working toward a double bachelor’s degree in English and community health and development. Her English focuses are Chaucer and Shakespeare, and her community focus is sexual education.

Garry acts as APYA’s Christian coordinator this season. She just finished her first year at Princeton Theological Seminary and is on track for ordination in the Presbyterian Church. Garry will serve as the junior chaplain at Princeton University Chapel in the upcoming fall semester. Because she grew up in a “multireligious, multicultural, multilinguistic” environment, she is motivated to continue interfaith work as her life’s calling.

And APYA’s Jewish coordinator, Hall, just finished his first year enrolled in Hebrew Union College’s rabbinical school. He spent his first year in Jerusalem and will be in Cincinnati, Ohio, for the next four years. Hall hopes to serve in interfaith and pulpit positions later in life.

The “Ask Us Anything” programs, like the one held on July 20, are just some of the myriad events the coordinators host. Porch chats, normally a weekly event for APYA, tend to get high praise. The group recruits a speaker for the evening and invites high school and college-aged students to pose questions or comments. Older adults are asked to sit on the other side of the porch, so young people have the opportunity to be “vulnerable.”

“The (interfaith) lectures are so big that sometimes students might not have time to formulate a question, might not have the confidence to go up in front of everyone on the microphone,” Garry said.

“I think it’s really important in those types of topics to establish that safe space because it’s not necessarily comfortable for individuals to talk about that in everyday life,” Noorani said. “Having that extra pressure of someone judging you from aside, (who) isn’t in the same mindset as you are, might be something some people aren’t comfortable with.”

And the coordinators love deep conversation. Bayramoglu recalled a time just that morning, where he and Garry had a quick back-and-forth about fate versus freewill.

“In a sense, Sunni Islam is very deterministic, but there’s a fine line that’s really, really blurry when it comes to free will,” he said. “I just realized, I’m like, ‘Man, we’re really different when it comes to this free will stuff.’ So, that’s been my favorite conversation thus far, going back and forth on an either-or or this right-in-the-middle thing.”

“It’s good to see those people in a more casual manner, where we have our guard down (and) they have their guard down,” he said.

Their conversations are an opportunity to “pick the brain” of not only their guest, but of one another as well.

“You know, naturally, some things will pose more conversation than others,” Bayramoglu said. “I remember the first one that we had was on eschatology and the afterlife, and that had a big group of these attendees talking until midnight about what the Bible says, what the Bible doesn’t say, how you approach it and all this other stuff.”

This week, APYA is launching their “Before I Die” campaign, for which they plan to place large chalkboards outside of the Smith Memorial Library and Bellinger Hall with “Before I die, I want to … ” as the header. Chalk will be provided for anyone who passes by to write their response. Next week, the header will say, “I’m grateful for … ”

“We have pulled our muscles, we’ve ruined our pants,” Garry said about creating the boards.

“I still have spray paint in my nails,” Noorani admitted.

“Mine, too,” Bayramoglu added.

“Not great,” Hall said with a sigh.

“We’re just kind of trying to make this be a very communal space for people to have ownership and vulnerability and anonymity,” Garry said.

Noorani said the group has had a wide variety of Chautauquans who keep tabs on what APYA is up to. Other successful activities have included pizza, letter-writing to soldiers and yoga or mindfulness meditation. APYA tends to have the best results, she said, with events where the four are the ones answering questions.

“I think that’s one thing, when you are intentionally representing your faith or intentionally in an interfaith group, there’s conversations that are organic that would not be organic anywhere else,” Garry said. “We have an opportunity and a platform to (say) ‘This has always confused me about Islam, or this has always confused me about Judaism, why is this, why is that?’ … That intention is really important, I think, in building trust but also learning.”

The group also wants to provide events that honor each respective religion.

“I thought the Eid celebration at the beginning of the year went really well — celebrating the end of Ramadan,” Hall said. “That was great.”

“We had music,” Noorani said, “lots of dessert, vegan options …”

“Which was really just a bowl of grapes,” Garry interjected.

And when they’re not hosting, they’re visiting — lectures, symphonies, ballet, opera. They are stopped that day, for example, by people giving them dinner invites, and they hesitate to agree because they have an International Order of King’s Daughters and Sons talent show to attend that night.

“We are just given so much love and so many opportunities that it’s a juggling act at this point,” Garry said. “We’re always missing something, but we’re always gaining something as well.”

Since arriving, the group has suffered from what they dub the “Chautauquan choice.” Garry said their experience has been happening “in a second and a century.”

“It’s a matter of picking and choosing, but even when you pick something that’s amazing, you still lose out on something that’s equally amazing,” Noorani said. “It gets really hard. I think attending all the lectures and being a part of the community is just so fun. We’ve learned so much in the last couple of lectures. Even through the start of the season, I remember we were just so awestruck by the lectures; they’re so good.”

But whatever the final decision is, the four are probably there together.

“The question is how often are we apart?” Garry said. “It’s like zero.”

“I think yesterday was the first day that I didn’t have dinner with them,” Noorani said. “I think people outside of us four are surprised when we’re not together. I think that says a lot. Zoë and I share an apartment together, and we’ve gotten close. She borrowed my contacts.”

“She wanted to use my eyes to see the world,” Noorani quipped.

Hall echoed this statement, saying he was glad APYA is “not a one-person job.” He and Bayramoglu share an apartment as well.

“You pick up a lot from seeing people casually throughout the day — what they do, what they don’t do, the intricacies of everything,” Hall said. “I feel like I’ve learned more about Islam from living with Omar than I ever have from taking an ‘Intro to Islam’ class in college or anything like that. … Knowing the religions are cousins, I always knew there were lots of connections, but they’re incredibly similar.”

The roommates have formed unbreakable bonds, sometimes apparent in the most minor details.

“We’ve all picked up each other’s catch phrases,” Noorani said. “Omar always says, ‘Oh no!’ Zoë always says, ‘I serve a living God,’ which is so true. Will always says ‘unclear,’ he’s just like, ‘yeah, that’s really unclear.’ I don’t have a catchphrase, so we’re still trying to figure out what mine is.”

The APYA coordinators are grateful to have Chautauqua be their home base this summer. Bayramoglu said they “keep each other together, sane (and) proper.”

“We even have, like, late-night conversations where we’re up until like 1 o’clock talking about religion,” Noorani said. “It’s the funniest thing because we never anticipate on starting it that way, but it always ends up that way.”