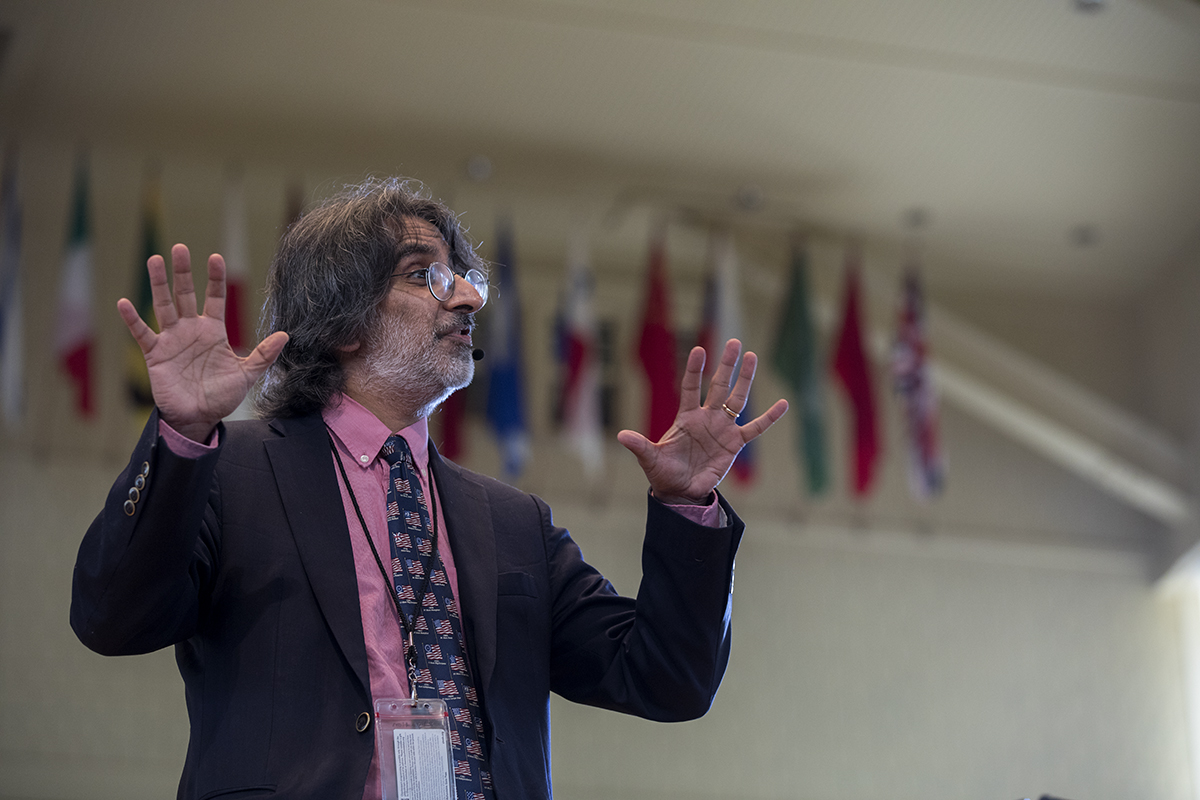 Akhil Reed Amar, Sterling Professor of Law and Political Science at Yale University, delivers his lecture on “How the Warren Court Still Endures” on Thursday, July 27, 2017 in the Amphitheater . PAULA OSPINA / STAFF PHOTOGRAPHER

Week Five: “The Supreme Court: At a Tipping Point?” asks whether the highest court in the land found itself, on Nov. 9, 2016, operating under radically different circumstances than it had been on Nov. 7.

Akhil Reed Amar has an answer: No.

“My basic claim is that there’s not a huge transition, at this moment, in the Supreme Court,” Amar said. “There could have been had the election gone differently, but it didn’t happen.”

Speaking Thursday morning in the Amphitheater, Amar took the Chautauqua stage to explore what such a paradigm shift would have looked like had it occurred. In particular, the Sterling Professor of Law and Political Science at Yale University drew on historical instances in which such judicial revolutions did happen, to explore the reasons a modern one didn’t.

“Had the election gone the other way, you would’ve had really, for the first time since the Warren Court, a Democratic majority,” Amar said.

But though that liberal contingent  — Justices Sonia Sotomayor, Ruth Bader Ginsburg, Elena Kagan and Stephen Breyer alongside Merrick Garland — never materialized to push the court leftward, the court today is still operating under the sway of a similar transition that occurred decades ago.

As far as the modern day is concerned, however, no such dynamic emerged. And it all comes down to the fight for the 2016 presidency.

Such an election, where both sides have a chance at taking it all, hadn’t happened since before Chautauqua Institution came into existence.

My basic claim is that there’s not a huge transition, at this moment, in the Supreme Court,”Akhil Reed Amar said. “There could have been had the election gone differently, but it didn’t happen.”

The year was 1864, and President Abraham Lincoln was up for re-election. Jacksonian Democrats had been dominating elections for years, and the courts were packed with their picks. Had their candidate, George McClellan, defeated the Republican Lincoln, then the party responsible for reaffirming slavery in Dred Scott v. Sandford would have run not just the courts, but the executive and legislative branches, too.

Yet, in a way that wouldn’t be possible again until 2016, Lincoln’s side had a shot at the same sweeping victory as his opponent’s.

“If McClellen had won, maybe (he’d) try to undo … the Emancipation Proclamation … (and) Lincoln’s basic war policies,” Amar said, “which today would be the equivalent of reneging on the Iran deal or rethinking America’s roll on climate change.”

Simply put, “1864’s a big deal.” And its contentious circumstances wouldn’t get repeated for more than a century and a half afterward.

That period of stability came to a close a few months ago.

“If Hillary Clinton had won the presidency, that means she would have won the Electoral College … but she lost the Electoral College, and she lost because she lost Pennsylvania and … Wisconsin and other states,” Amar said. “But if she had won Pennsylvania, probably the Democratic candidate running for the Senate (in) Pennsylvania — Katie McGinty — would’ve beat Pat Toomey. There’s very little ticket splitting in America … And had (Clinton) won Wisconsin, then Russ Feingold would’ve probably won … rather than Ron Johnson.”

Winning those two pivotal seats would have changed the partisan makeup of the Senate from 52-48 to 50-50, and with Tim Kaine serving as tie-breaker in his vice presidential capacity, the Democrats would have had the clout to nominate left-leaning justices to the Supreme Court.

Flipping the House would have been “more of a slog,” given the geographic distribution of American voting blocs, but it wasn’t out of the question either.

“That’s why this was a big election,” Amar said. “Democrats could’ve run the table, Republicans could’ve run it and did … and we haven’t had that since 1864.”

“If there is any transition at all, it might be — possibly — the emergence of a little bit broader (of) a center coalition” in the Supreme Court, Amar said.

While the court has recently reflected a 4-1-4 orientation, with Justice Anthony Kennedy (and previously Justice Sandra Day O’Connor) serving to either swing or split the bench, new trends suggest the emergence of a “broader center coalition.”

“In the last term, they actually agreed on stuff; Republican appointees and Democrat appointees (agreed) on big things,” Amar said. “On religious equality in Missouri, 7-2 … (or) John Roberts actually saying, ‘Obergefell is decided, we’re not revisiting same-sex marriage,’ … (and) several cases where he, last term, in my view, redeemed the promise of his confirmation hearings that he was going to try to broaden the coalition (and) have fewer things decided by narrow 5-4 margins.”

But in the grand scheme of things, or even just in the context of historical Supreme Court dynamics, this change is more subdued than it might have been.

“I want to tell you what a real transition looks like and how we’re not in that time right now,” Amar said.

This transition took place under the Warren Court, from 1953 to 1969. It was a shift so fundamental that America still operates in its shadow to this day.

That’s why this was a big election,” Akhil Reed Amar said. “Democrats could’ve run the table, Republicans could’ve run it and did … and we haven’t had that since 1864.”

Before Earl Warren became chief justice, America was a very different place. The “legalized apartheid” of Jim Crow coated the nation, and the democratic ideal of “one person, one vote” was contradicted by mass malapportionment. There was no strongly enforced right to vote or federally protected free speech, and both criminal rights and religious liberties were contradicted by the realities of the country’s legal and political systems.

This was because “the Bill of Rights generally (did) not apply against states, but only the federal government,” Amar said.

He had the audience shout out some of America’s landmark Bill of Rights cases, and pointed out that nearly all of them — Mapp v. Ohio, Lawrence v. Texas, Griswold v. Connecticut — were brought against a state, not the federal, government.

“What we call the Bill of Rights is actually the 14th Amendment,” Amar said.

Thus, it wasn’t until after 1953, when the Warren Court began pushing forward the “incorporation doctrine,” that all of the protections afforded under the first 10 constitutional amendments were expanded to cover abuses at the hands of not just the union, but also its composite members.

“That, my friends,” Amar said, “that is what a real … revolution looks like.”

Despite the conventional perception of this shift as a liberal one, its underlying ideology is now supported by right-leaning legal minds, too, “whether they are aware of it or not.” The same expanded protections that they once hated for allowing Brown v. Board of Education, then, are today also employed to make conservative arguments for Bush v. Gore and Citizens United v. FEC.

The one exception Amar has in this regard is with the Warren Court’s Mapp v. Ohio ruling against the use of illegally seized evidence in criminal proceedings.

Both sides, however, have something to learn from the other.

“Here’s what the conservatives do not understand: They think they’re opposed to the Warren Court, (but) they’ve actually made their peace with it, and good,” Amar said. “Here’s what the liberals don’t understand: that we shouldn’t be letting guilty people off on crummy technicalities that have nothing to do with guilt or innocence.”

It is from an originalist reading of the Constitution that Amar finds justification for these beliefs. And despite modern icons of originalism tending to be conservative (like Justices Antonin Scalia, Clarence Thomas and Neil Gorsuch), it is a legal methodology just as applicable to liberalism.

Out of that ubiquitous relevance, he sees a path toward a more unified America.