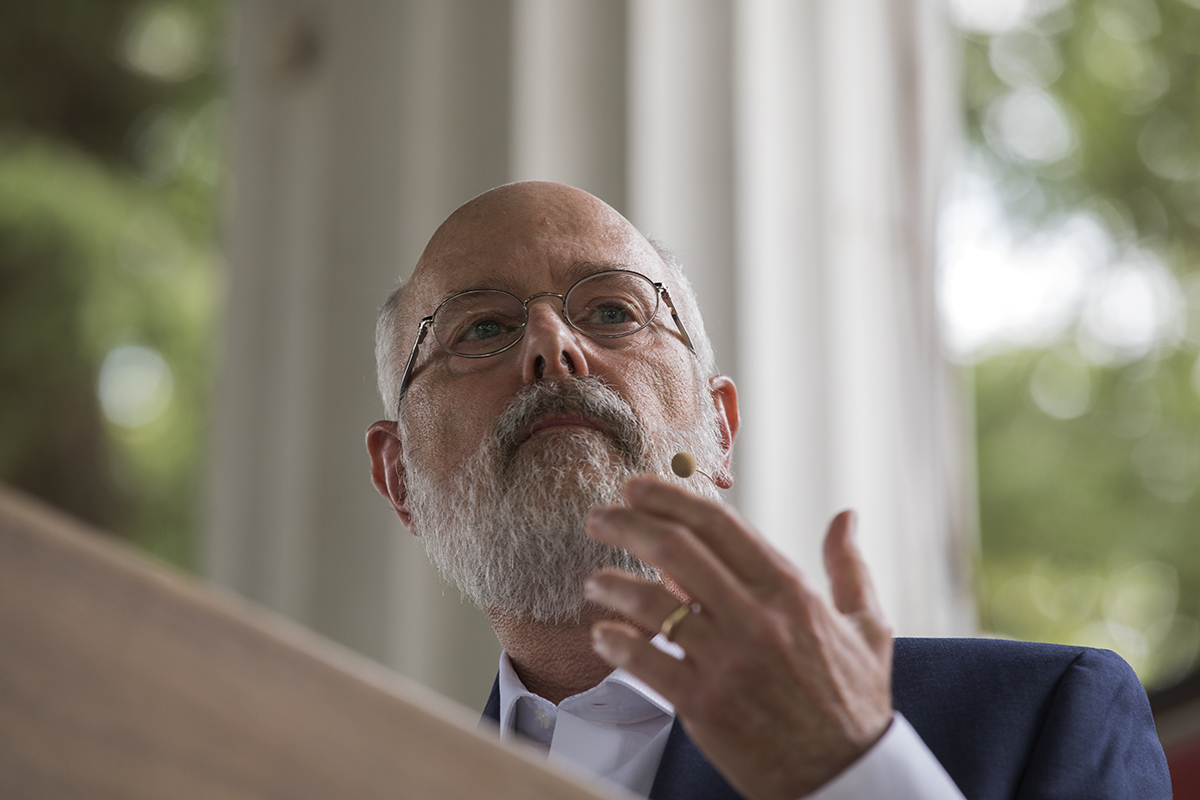 Professor of Jewish philosophy Alan Mittleman delivers his speech on "Can the Supreme Court and the Religious Community Be the Conscience of the Nation?" on Friday, July 28, 2017 in Hall of Philosophy. PAULA OSPINA / STAFF PHOTOGRAPHER

In his 1957 “Birth of a New Nation” speech, Martin Luther King Jr. describes America’s ideal trajectory as a “beloved community.”

Alan Mittleman, Aaron Rabinowitz and Simon H. Rifkind Professor of Jewish Philosophy at the Jewish Theological Seminary of America, explained King’s high ideal for the nation with two concepts in mind — covenant and conscience. Mittleman’s speech, “Can the Supreme Court and the Religious Communities Be the Conscience of the Nation?,” closed out Week Five’s Interfaith Lecture Series, “The Supreme Court and Religious Communities: Holding America Accountable?,” Friday in the Hall of Philosophy.

“It’s really a society of brothers and sisters who have reconciled,” Mittleman said, “and that plays off a biblical trope of the covenant community as God’s chosen form of political order.”

This ages-old concept of conscience, of the little voice inside, came with a lot of questions for Mittleman, especially due to the “very fraught, very overwrought political climate of today.” The most basic question: Who are we?

“Are we really one nation anymore — more than the sort of legal or notional sense?” he asked. “Our divisions are so deep, our partisanship is so pervasive.”

Underneath this “moral, cultural and political” separation, Mittleman wondered about the ways America could connect with values that go beyond these divides.

“Can we speak, in other words, as a covenantal community — beloved community — bound together by an idea’s ideals, with a shared mission and a destiny?” Mittleman asked.

And because he is trained to think philosophically, he asked, too, if these aspirations are any good at all.

“Is this asking too much as a society to reach some sort of ideal of maximal consensus on what we are here together for — a common good, a long arc of history that bends toward justice that we can achieve?” he asked. “I think in our pious and patriotic moments, we like to think so, but does that set the bar too high for a diverse, secularized, conflictual mass society like our own?”

Puritan leader John Winthrop delivered a sermon on this very topic. In 1630’s “A Model of Christian Charity,” he used the Bible’s “city on a hill” metaphor to describe an ideal America.

“The emphasis is on individuals coming together to found a society based in a certain kind of equality and freedom under a divine rubric with these high world ideals,” Mittleman said.

By entering into a “marriage-like partnership” with God, he said, human beings will flourish and be re-identified as a holy people.

But there are such promises as “secular covenants,” too: opportunities for human nature, moral agency, free will and rationalization. People often agree to follow a common order, pursuing what Western culture says is right.

“Are we really one nation anymore — more than the sort of legal or notional sense?” Alan Mittleman asked. “Our divisions are so deep, our partisanship is so pervasive.”

In biblical, republican, covenantal order, “power is not concentrated in one place,” according to Mittleman. Prophets work against kings, and priests work against prophets.

“Covenantal order is one of disagreement, of negotiation, of compromise; it’s not a command and control kind of politics,” he said.

In contrast, Mittleman listed several men referred to as “social contract thinkers” — John Locke, Thomas Hobbes — who believe one’s moral contract, or conscience, is dependent on the “command and control” of the surrounding society.

“The Declaration of Independence reflects this covenantal language, and patches in this deep theme of a free people making itself a people through a kind of oath, through an agreement, with sacred ideals,” Mittleman said.

Both the Declaration and the Constitution, often referred to as sacred texts, further this idea of America as a chosen people, an exceptional nation and the “last best hope of the earth,” according to Mittleman.

But Mittleman found it curious that King, who professed that a group could form a collective conscience, looked up to American theologian and ethicist Reinhold Niebuhr, who declared “conscience is strictly a personal attribute.”

Niebuhr believed that institutions were “caught in (a) game of self-interest and power” against other institutions. Whereas individuals normally act on a selfless, sacrificial basis, Niebuhr said, societies are “blinded by collective egotism.”

“If King took people seriously … why would he think that something like conscience could be lodged in institutions, which, by definition, transcend individuals and have to do things for their own survival in a political, historical complex, which may be quite immoral?” Mittleman asked.

Although King revered Niebuhr’s ideas, they were very different people. For example, Niebuhr believed the ideal society would have a “permanent tension between Christian love and political justice.” On the other hand, King’s ideal society would “reconcile (its) tensions.” Ironically, though King suffered significantly more than Niebuhr, Mittleman said, King had much higher hopes for the nation.

In trying to distinguish who was correct, Mittleman said it may help to consider what conscience really is. Rooted in the Latin word scientia, which means “to know” or “knowledge,” conscience is subjective — not in the sense of “I like chocolate, I like vanilla.” Rather, Mittleman said, conscience is the voice people know they should listen to even when they do not.

“It is the internal voice that may not be the loudest, maybe the Bible’s … still small voice that becomes the voice of God,” he said.

Often, the conscience is complemented with some of kind of emotion — remorse, guilt, shame — much of the time dependent on context. For example, if a Catholic physician was asked to perform an abortion, he would probably decline to do so, “even if under very exigent conditions.” If a Jewish physician were asked to do this, he might assume the Jewish principle of acceptable abortion if the mother’s life is at stake. Mittleman said the physicians are being “equally conscientious (but have) different moral frameworks.”

“Many philosophers would say conscience is not substantively moral; it’s formalistically moral,” Mittleman said. “But it’s morally neutral. It really depends on your training, your upbringing, your allegiances, your community and so on.”

The conscience, he said, allows people to be “self-transcendent.”

“That is precisely because conscience acts as an internal judge, it causes us constantly to check our own presuppositions,” he said. “It causes us to interrogate our own prejudices, our own biases, to reflect on whether we can be better than we are. I think if you allow conscience to have a sort of self-transcending, self-criticizing, moral imagination, expanding function, conscience then can kind of climb out of this beholdenness to the moral framework we’re in by birth, or upbringing, or socially or whatever, and act as a kind of transcendent point of view for our life.”

Moreover, Mittleman said parenthetically, if someone feels “morally neutral,” this is because the “conscience of God’s law” is already written into our souls. If something seems sincere and rational, then it must be a component of God’s mandate.

“Conscience is not necessarily an infallible guide to a truth that we know deep down, a kind of moral anchorage, but conscience can be a reliable guide to that truth,” Mittleman said.

Conscience can wear the guiding hat, but it also wears the dialogue hat. Throughout the decision-making process the conscience operates as a give-and-take, Mittleman said, challenging and negotiating with itself in order to reach some kind of moral compromise.

“It is the internal voice that may not be the loudest, maybe the Bible’s … still small voice that becomes the voice of God,” Alan Mittleman said.

Mittleman said the model of conscience that suggests one united voice does not work for America’s “democratic, pluralistic, largely secular society.”

“I think we need a model where we can be true to our sense of conscience but recognize its relativity at the same time,” he said.

Communities are at their best when they can express their differences and resolve them in a peaceful manner, Mittleman said, with compromises giving way to some kind of progress.

“We no longer see one another as ‘the neighboring,’ ” he said, “as covenantal partners who have equal standing and equal legitimacy and work ultimately for the same ideals of human dignity and human justice in a decent society.”

Instead, Mittleman said, the nation lacks what Aristotle called “civic friendship” and has “lost the art of disagreeing with one another in an agreeable way.” People must take one another’s ideas seriously and respect one another when their views do not perfectly align.

“As a covenantal text, this wellspring of conscience as Americans doesn’t coerce agreement or doctrinal conformity,” he said. “It invites us to continue to have a government and political culture in terms of what Alexander Hamilton called reflection and choice, rather than force and accident.”