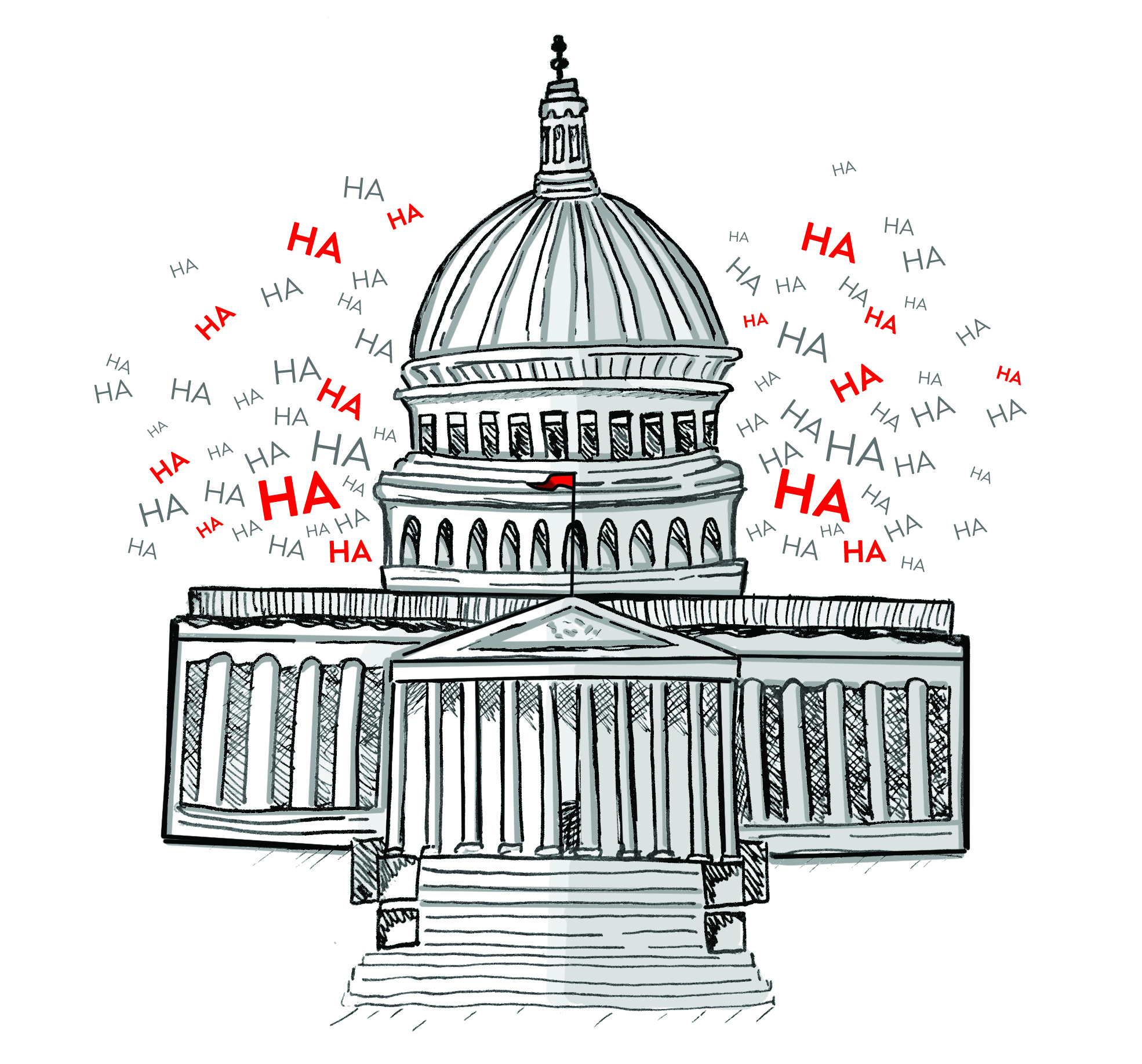 Politics are no laughing matter.

Well, not usually, that is.

But when the Capitol Steps take to the Amphitheater stage at 8:15 p.m. Monday for a live performance of their most recent political parody songs, they’ll be putting that assumption to the test.

“There really is kind of a problem that a comedian has when an issue’s very serious,” said Elaina Newport, a founding member of the group and the current co-author of their material. “We have a lot of (serious) issues that we try to address in our show, … so I’ve always found that in the case of a very serious issue, the best way to go at it is to go after the political figure that’s attached to it.”

As scary as North Korea might be, for instance, Kim Jong Un is “a pretty funny character” to build a satirical sketch around, Newport said.

But if funny characters are what you’re looking for, there are plenty to choose from a bit closer to home.

“Almost every song that we do, there’s some (character); like the woman who plays Hillary (Clinton) is gonna play Angela Merkel and Nancy Pelosi and maybe Melania Trump,” Newport said. “So yeah, we’re always going at it from the characters … (and) when one party is in power, as is the case right now with the House, the Senate and the White House, it’s going to be a lot easier to find the characters; you know, all the Trump administration characters, and the Paul Ryans and the Mitch McConnells.”

Chautauquans can also expect to see Attorney General Jeff Sessions, Secretary of Education Betsy DeVos and Secretary of Housing and Urban Development Ben Carson mocked by Newport and her colleagues, as well as a new Donald Trump Jr.-themed song the group has been trying out in the wake of allegations that the president’s oldest son colluded with Russian agents.

“(Trump has) given us a lot of characters,” Newport noted.

But the Republican Party isn’t the only target in the Capitol Steps’ crosshairs.

“We try to keep it bipartisan … so we make a real effort to have a lot of characters from both sides in the show,” Newport said.

The group itself is fairly evenly split between liberal and conservative performers, Newport estimated, though she personally considers herself an “extreme moderate.”

In fact, it was while working on Capitol Hill for former Sen. Charles Percy, one of the “Republican moderates that you don’t find in the wild anymore,” that she helped found the group back in 1981.

“It was just entertainment for a Senate office Christmas party … and we truly just were throwing this together, thinking we would do it once for the … party,” Newport said. “And it was the early days of (President Ronald) Reagan … (who’d) come from acting to politics, and well, here we are, we’re going from politics to acting.”

When no one told Newport and her co-founders, Jim Aidala and Bill Strauss, to stop (let alone fire them), they just kept going.

“When we started doing this, we were kind of a bit of an oddity, like, you know, a tap-dancing cat or something,” Newport said. “People would come to see us kind of because we had such a unique angle.”

The group continued to garner attention both inside and outside of the D.C. political scene, learning to avoid getting too “inside Washington” and making their material accessible to legislators and laypeople alike.

“When you work on the Hill, you think everything you do is important, and you know, you might say, ‘Well, let’s write a song about the (Sen. Charles) Schumer amendment on regulatory reform,’ ” Newport said. “Something like that, you know … like, no, I don’t think anybody’s going to care about that.”

As their popularity grew among general audiences, the group also found themselves invited to perform before the biggest Washington insider of them all: the president. Reagan, Bill Clinton, George H.W. Bush and George W. Bush were all Capitol Steps audience members during their respective terms.

That trend may have come to its end, though.

“We didn’t get invited under the Obama administration, and … I don’t think Trump will invite us,” Newport said. “It’s a hyperpartisan thing now, and especially when you’re at the very top, (you’re) always in fear that whatever you laugh at will show up on YouTube or become a meme; so I think they’re getting a little more cautious about it.”

Despite the growing hesitancy of sitting presidents to open themselves up to direct ridicule, the group has continued to crack jokes outside the White House. Recent albums in the last few years alone have included Orange Is the New Barack, What to Expect When You’re Electing and Mock the Vote, all in addition to the twice-weekly shows the group puts on back home in D.C.

Today, 35 years and six presidents after that fateful Christmas party, they’re still at it.

Of course, although some topics have stayed satirically ripe over the years — “scandals are fascinating, especially if they’re sex scandals,” Newport said — the modern political and media landscapes present unprecedented obstacles, too.

“The quickness of the news cycle (has changed); right now, as soon as (something happens) … everybody’s gonna know right away … (so) our performance(s) have to be more fearless than they ever were,” Newport said.

Social media has also changed how the groups thinks about its work.

“There’s pluses and minuses,” Newport said. “The minus is that a lot of people do kind of spontaneously think of somewhat the same jokes, and there’s some obvious jokes out there. But the plus is that everybody knows (everybody); we can go up now and do a song about the secretary of education, because everybody knows Betsy DeVos, because everybody on social media’s been giving their opinion of her. … Twenty years ago, I don’t know if anyone would’ve even known who the secretary of education was.”

Of course, the biggest change to their game may have been the election of President Donald Trump.

“Comedy is based on exaggeration, and that was one problem with Clinton and it’s definitely a problem with Trump too,” Newport said. “Just an example: When the campaign started, I wrote a joke for the Trump guy to go out and he said, ‘I never kiss babies; babies are losers.’ … Well, about two weeks later (Trump) got into it with a baby at a rally and kicked a baby out.”

Her writing had to “get a little more far out,” it seemed.

But for a group of performers that draws their humor in large part from scandals, the fallout of Nov. 8, 2016, offered some new opportunities, too.

“I can’t remember a time in our history when people haven’t come up to us and said, ‘Hey, you must be having a field day right now,’ ” Newport said. “But this really does feel rapid-fire, something new every week.”

Whether easier or harder, the Capitol Steps’ bread and butter is whatever current events happen to be making headlines at a given time. Their performance at Chautauqua Institution will be no different.

There is one thing in particular that might turn some heads, though.

“I should warn (Chautauquans), there’s partial nudity,” Newport said. “Putin comes out without a shirt on.”