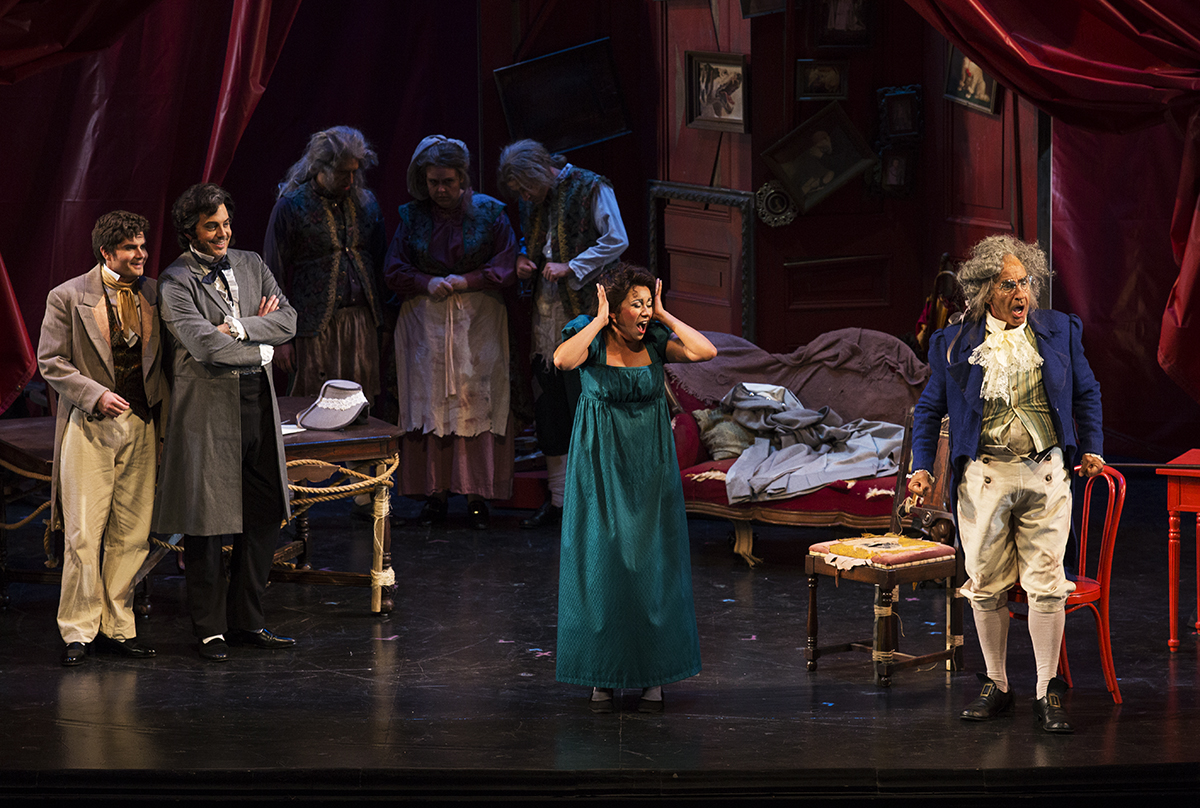 Ask baritone Kyle Pfortmiller and he might say that Don Pasquale is a precursor to the modern-day sitcom.

The farcical opera buffa, penned by Gaetano Donizetti and premiered in 1843, certainly has all the hallmarks: an old bachelor who is made to be the fool by the ones he loves, but eventually sees the folly in his ways and does the right thing.

“You could pick up (these) characters and put them in a ‘Friends’ episode or a ‘Cheers’ episode or ‘Seinfeld’ or ‘Dick Van Dyke’ and it translates immediately,” Pfortmiller said.

Both Pfortmiller and de Peppo are familiar with their respective roles. While it’s been nearly eight years since Pfortmiller last played Doctor Malatesta, Don Pasquale is a role that is part of de Peppo’s repertoire — a stable of characters that he is prepared to perform. The rest of his repertoire primarily comprises late 18th- and early 19th-century comedic roles.

“Sometimes playing some dramatic role would be interesting. I do it, but not very often,” de Peppo said. “I’m comfortable in finding something on stage that I’m not every day.”

Though a longer stretch of time has passed between Don Pasquale performances for Pfortmiller, he still finds comfort in the familiarity of the role.

“It’s nice to be able to come into a show like this,” he said, “already knowing the music and not having to come up to speed but having an idea of the arc of the character.”

For Schweizer, however, this is his first foray into the world of Don Pasquale. While he has directed operas composed by Verdi and Mozart, the vast majority of his work is in contemporary opera. More specifically, world premieres, which made up the entirety of his schedule last year and will again in the upcoming year.

When he is asked to direct a classical opera, Schweizer said it usually means whoever asked is looking for some sort of radical reinvention of that work. That very well could have been the mindset he brought to Don Pasquale, but after visiting Chautauqua Institution last summer and speaking with Steve Osgood, Chautauqua Opera’s general and artistic director, Schweizer saw clearly what he was supposed to do. And it wasn’t what he normally does.

“I said, ‘Ya know, I think my job is to just render this piece in a really warm and entertaining way,’ ” Schweizer said.

With that measure in place — and keeping in mind the production’s in-rep presentation with Hydrogen Jukebox — Schweizer set out to conquer the challenge of “how to seduce an audience into coming into this world” of Don Pasquale, to “conjure a world for that audience that would let them know that they were seeing a wonderful, old-time opera.”

That’s not to say he hasn’t taken the opportunity to make the production his own.

Schweizer said it is very much a part of his personality to “up the stakes of the theatricality” while at the same time try to not get in the way too much, especially with a play like Don Pasquale, which he calls “warm, funny, astonishingly tuneful and so Italian.”

While heightening the “clowning” of the production and stylizing the production in “the comedic way,” Schweizer has proceed cautiously and purposefully.

“I’ve taken great care in being true to its life,” he said. “The sweet, animated, warmly funny life of it.”

One aspect of that life that would have been altered in years past is the language in which the Italian opera will be delivered.

For the first time in its nearly 90-year history, Norton Hall will host an opera that will not be sung in English, but rather its original language of Italian.

Schweizer himself has directed productions in numerous languages, but Osgood wanted to be sure it wasn’t something that gave him pause. Schweizer assured Osgood that it didn’t, embracing the idea in major part because Don Pasquale is an Italian opera that is “so Italian.”

Himself a native Italian, de Peppo holds what he sees as a big advantage. But it’s not just an advantage of understanding the language. It’s also the advantage of elocution.

“I know how this language, Italian, goes in terms of accents and how to color words because it’s my language,” de Peppo said.

This, in turn, creates a unique experience for audience members.

Admittedly, it is a bigger challenge, but also “a bigger satisfaction,” de Peppo said.

Perhaps it is not a surprise that satisfaction is the aim of Schweizer as well. Much like de Peppo, it’s not a satisfaction he seeks for himself, but rather those seated in Norton Hall.

“I hope (audience members) have had a wonderful time,” Schweizer said. “I hope they have felt an immediacy to the experience of hearing a really beautiful Italian comic opera in Italian.”