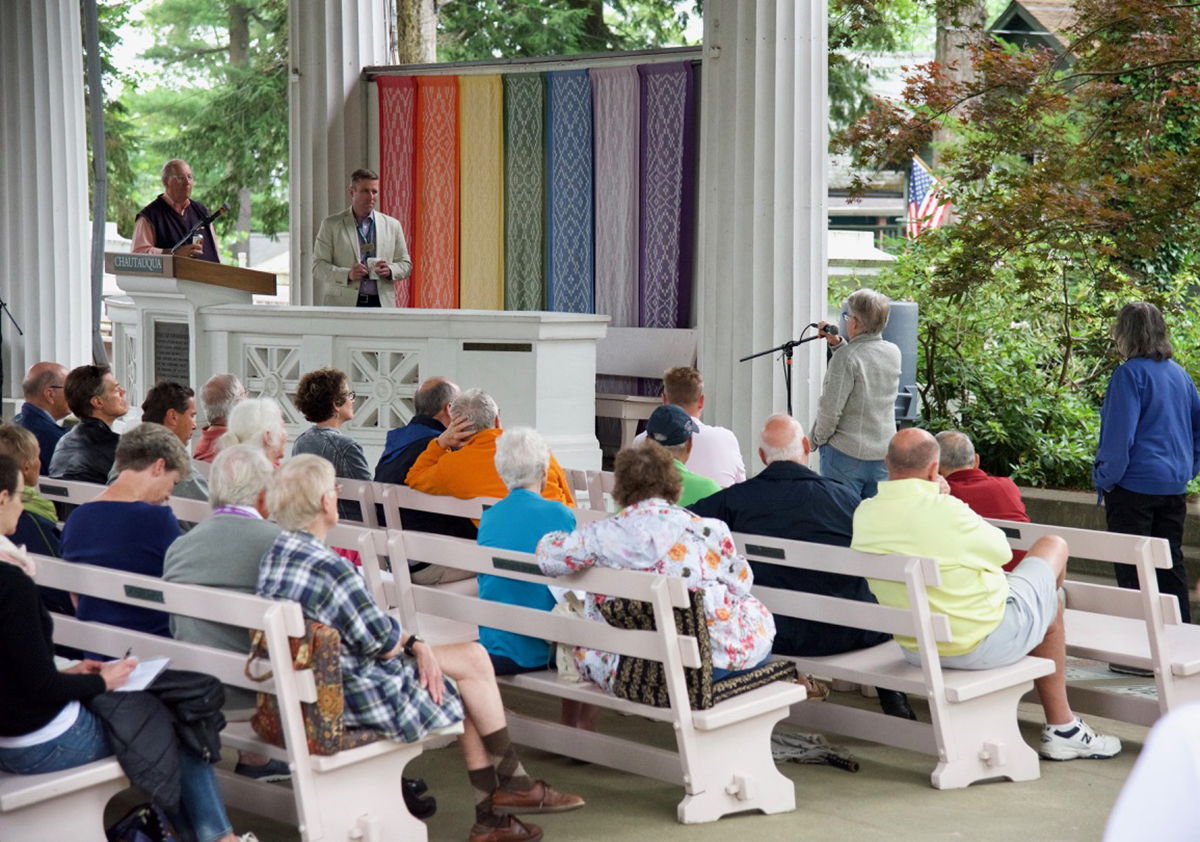 The Chautauqua Institution Board of Trustees’ open meeting has a new name — the Leadership Forum. On July 15, President Michael E. Hill joined James A. Pardo Jr., chair of the board, for a Q-and-A session.

Thompson resident Carol Rizzolo raised a question about whether front yard signs are allowed, referencing a recent Letter to the Editor published in The Chautauquan Daily.

“In the past, enforcement has taken the form of common sense,” Pardo said. “Occasionally, as my predecessor George Snyder would often say, ‘It’s not for us here in Chautauqua to legislate common sense,’ so we’re going to try and do better on that issue.”

According to the rules and regulations of Chautauqua Institution, front yard signs are prohibited during the season.

“Signs that are clearly signs of welcome, especially with this year’s theme and this particular political climate, I would like to request that that rule be revisited,” Rizzolo said.

John Dilley, Area 5 Representative and chair of CPOA’s Outdoor Lighting Committee, stepped up to the microphone to address concerns about the recent herbicide application in Chautauqua Lake. Chautauqua is one of two local institutions that takes its water from the lake.

“We’re extremely concerned, we want a seat at the table and we want to understand what has happened and what’s going to happen,” Hill said. “What I would say to community members is I don’t think we’re well served by going aggressively toward this without understanding what’s truly happening.”

According to Hill, the permit that was sent to the New York State Department of Environmental Conservation regarding the herbicide will be made public for the “entire community,” as well as an updated plan for the lake.

“I think what’s helpful is for us to be armed with as much information as possible to understand what really is or isn’t happening and then to respond,” Hill said. “What I can report on behalf of the Institution is that we are all over this.”

Herbicides were used in late June to treat the overgrowth of weeds in the lake.

“I’m not here to argue who’s right or wrong,” Hill said, “I’m here to gather the information so that we can aggressively and proactively make sure that the way that we interact with the water is both safe for drinking as well as for recreating in the long-term health of the lake.”

Another community member raised concerns about transportation and accessibility across the grounds.

“Chautauqua’s an interesting community in that it gets built over time and a lot of where it was built was built before accessibility laws or regulations were in place,” Hill said, “which makes for an interesting challenge when you try to retrofit out, in essence, a small town — which is not an excuse not to do it, at all.”

According to Hill, addressing accessibility issues will “show up in a master planning process” and in figuring out “different ways to get people around on the grounds.” The transportation issue, Hill said, is one that requires more than one solution.

“It’s one of the next big hurdles as we look at how Chautauqua can welcome people of all different ages and mobility issues,” Hill said.

An app that will enable users to see shuttle and tram routes and schedules is currently in development. Another community member expressed the desire to have an app that would contain information about all the programming at Chautauqua, similar to those she’s used at conferences, and inquired about better internet access throughout the grounds. There are formidable cost and logistical issues to providing fiber optic internet and Wi-Fi access across the Institution.

“Please know that we’re moving on that as quickly as time, resources and planning allow it,” Hill said. “We hear you completely.”

In response to a question about how the plaza in front of the Amphitheater will be further developed, Hill said that it will be extended and turned into a “really pedestrian-friendly, beautiful plaza” with benches, replacing the gazebo, more “convening areas” and other improvements.

Horrigan clarified that the Chautauqua Lake herbicide application was for a data collection project for the use of two herbicides in the village of Bemus Point and the town of Ellery, not a general application in the “upper lake whatsoever.” According to Horrigan, the project was “carefully controlled by the DEC” and “monitored by our health department.” Chautauqua Lake is owned by New York state and regulated by the Department of Environmental Conservation. There is not currently another scheduled test.

McCoy noted that usage of an Article 15 permit for research is “a little unusual” and “a little bit different for Chautauqua Lake,” but they are legal applications.

“I can say that, with reasonable confidence, that the DEC did a very good job in evaluating what was being done, and it was done in a very safe and effective manner,” McCoy said.

Two additional restrictions for untreated drinking water and irrigation were also imposed. The restrictions were formally lifted through press releases issued on June 28 and July 13 respectively.

Boria contacted the New York State Department of Health toxicologist to confirm that the water use restrictions were “appropriate and accurate” and confirmed with the health department that there was no need for swimming restrictions at permitted beaches at the Institution and around the area.

The samples results collected from Chautauqua Utility District’s water intake showed that one of the contaminants, 2,4-D, was non-detected and the other herbicide, Aquathol K — which is an ingredient found in Round-Up — were 0.17 parts per billion. The maximum allowed level of Aquathol K is 50 parts per billion. Boria suggested that the presence of Aquathol K was a result of runoff from independent ground application by individuals.

Boria said harmful algal bloom toxins were found in “raw, untreated” drinking water but was 100 percent removed by the treatment plant with “pretty much state-of-the-art technology.”

“Nothing is more important than public health,” Horrigan said. “We have a lot of folks very focused on this wonderful lake. The environmental protection of this lake is at the top of everyone’s list. We want to be completely transparent and tell you what this was all about so that you get clear information.”

Hill said the Institution will continue to share information regarding the application and will host a separate meeting dedicated to the herbicide and lake issues.

Among the other concerns addressed were how to continue to connect with Chautauqua performing arts alumni, bringing the Institution into the digital age faster for archival and promotional purposes, and making people outside of Chautauqua aware of what happens on the grounds.