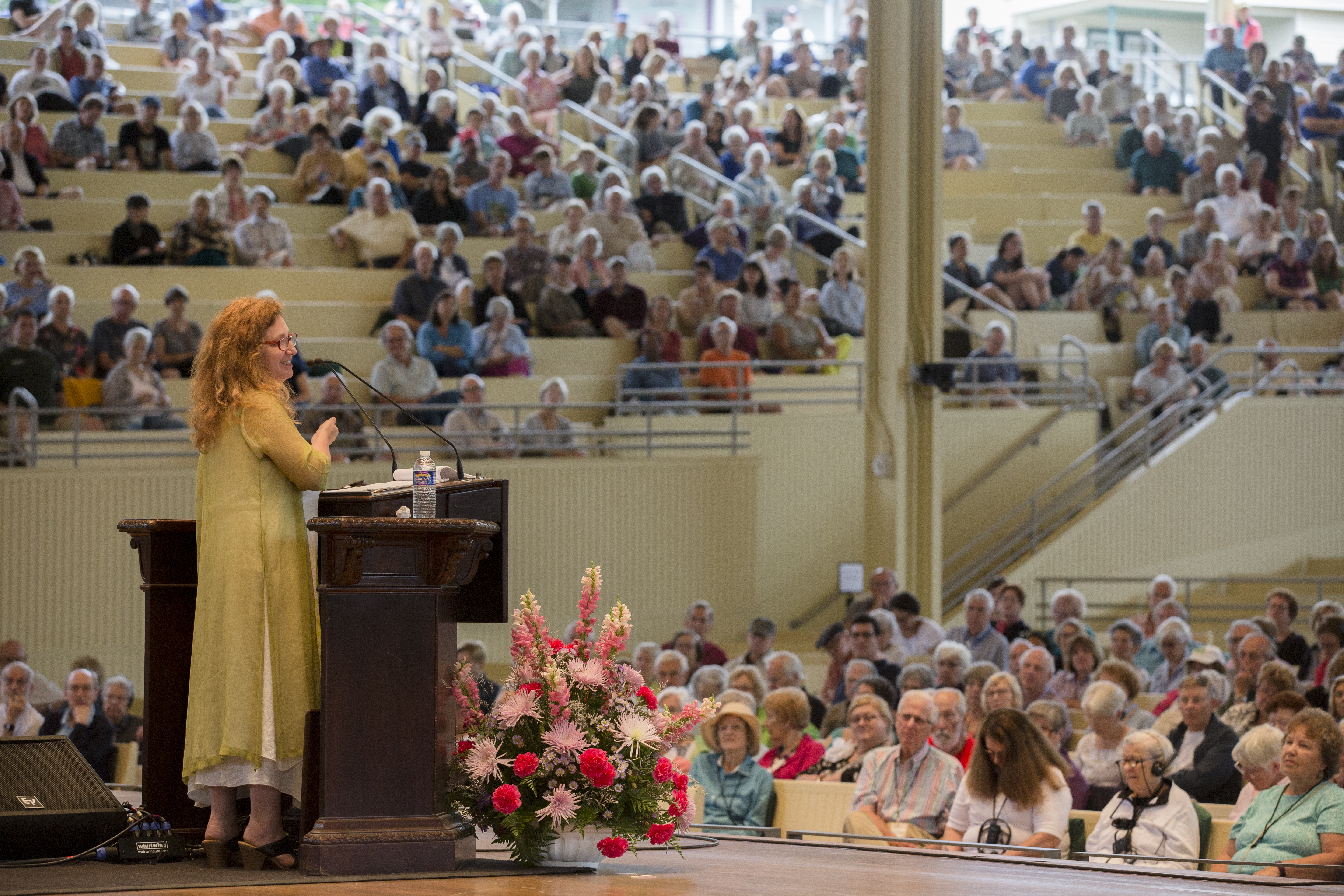 Dahlia Lithwick, senior editor at 'Slate,' discusses courts and law during the morning lecture in the Amp on Wednesday, July 12, 2017. CAM BUKER/STAFF PHOTOGRAPHER

Dahlia Lithwick is wondering why she’s at Chautauqua right now.

Don’t get her wrong; she’s happy to be returning to the Institution. But why now? After all, this is Week Three: “A Crisis of Faith?” And as a senior editor at Slate who primarily covers the Supreme Court, it seems like she’d be more at home a bit later in the summer, during Week Five: “The Supreme Court: At a Tipping Point?”

Speaking Wednesday morning in the Amphitheater, Lithwick sought to bridge that divide between the legal and the spiritual.

“How are we to think about faith and religion in the Supreme Court?” Lithwick asked. “We are poised at a moment when the court will be deciding seminal, crucial issues of religious freedom, of church and state (and) of what kind of dissent we’ll permit over civil laws.”

With the Supreme Court set to rule on the legality of President Donald Trump’s travel ban (a policy “based on what appears to be … religious animus”) and a Colorado baker who refuses to make wedding cakes for same-sex couples, as well as cases concerning public prayer and access to birth control, the question of how the court deals with faith will be as pertinent as ever going forward.

But it’s a difficult question to answer if no one is willing to ask it in the first place.

“I want to consider with you what we are not allowed to talk about, the thing that is never at the center of those conversations,” Lithwick said. “Which is: How do the justices themselves think about their faith, and our faith? How do they build that into … their analysis? And more urgently, why can’t we discuss it openly?”

Lithwick knows well the perils of tackling this question head on. When she tried to write about the Catholic majority on the court that Justice Samuel Alito’s confirmation created and how that might inform its rulings on topics like the death penalty and abortion, it was “called out as anti-Catholic.”

“I was told that this is just not an appropriate subject of public discourse,” Lithwick said.

Today, the Supreme Court consists of “five Catholics, three Jews, and one Episcopalian who was raised Catholic.” Given the court’s history as exclusionary to Catholics and Jews, this demographic is particularly interesting.

“All of this leads to what I imagine is the most provocative thing I will suggest to you today,” Lithwick said. “In a secular country, with no state religion, we go to the court as our national church.”

I want to consider with you what we are not allowed to talk about, the thing that is never at the center of those conversations,” Dahlia Lithwick said. “Which is: How do the justices themselves think about their faith, and our faith? How do they build that into … their analysis? And more urgently, why can’t we discuss it openly?”

But despite all the “trappings of holiness,” from the robes to the building to the sacred text that is the Constitution, “we can’t talk about religion.”

“How can we not have an adult conversation about the ways in which faith inflects on a justice’s thinking?” Lithwick asked.

The justices are, by their own admission, informed by their identities — and a part of those identities is their faith. Yet it is assumed that when the robes go on and the rulings are made, the influence of that faith disappears; the alternative is too destabilizing, even frightening, to believe.

“The mere intonation that that is the case leads to truly explosive conflicts,” Lithwick said.

Such a conflict happened when University of Chicago law professor Geoffrey Stone wrote a critique of a 2007 ruling against late-term abortions that had fallen perfectly along religious lines (with Catholics the majority and Jews and Protestants the dissent). Justice Antonin Scalia was “so affronted that those words had even been written” that he refused to visit the university for several years afterward.

Though Lithwick does give Scalia credit for working through his own questions of faith publicly, such as when he split from the Vatican on capital punishment, the question of religious influence cannot be written off wholesale.

“I think what matters is that there are so many moments when religion does matter at the Supreme Court,” Lithwick said.

For instance, atheist Michael Newdow’s case against public school recitations of the Pledge of Allegiance marked the only time Lithwick saw people in the court’s chamber clap, in response to his argument that the phrase “under God” had only been legalized because “no atheist could ever get elected to Congress.”

A similar situation happened with Town of Greece v. Galloway, a case where the Supreme Court ruled that opening a legislative session with prayer is legal. The decision again fell along religious lines, and perhaps more significantly, made evident the court’s insistence on silence in these sorts of issues.

“What the court does in the majority opinion is it effectively says, ‘We can’t be in the middle of this; we just can’t police faith,’ ” Lithwick said.

Yet in some ways, that very ambivalence was itself a means of taking a stand.

Even Justice Ruth Bader Ginsburg herself faced this sort of inequitable power dynamic when she chose not to attend the court’s traditional Red Mass and was then “excoriated for allowing her pro-choice views to inflect on (the Catholic event).”

Journalists, too, find themselves in a bind. Lithwick said that they are essentially faced with one of two choices: blindly assume that the justices’ faiths have no impact on their rulings, or resort to “truly ugly … (and) cartoonish ways” of using their religion as a proxy for their politics.

But Lithwick has another option: “a third way, another way to think about and frame this conversation.”

It is the way of compassion; the way that “our faith traditions would most value,” Lithwick said.

As a person of deep faith, even if often secretively, she has an idea of how heavily these questions of faith — “as soul-crushing, as passionate, as visceral, as emotional” as they are — must weigh on the justices.

And in that sense, perhaps she has unfairly judged them in the past.

“I have been wrong in saying … that the individual faiths of the justices matter,” Lithwick said. “I don’t think it matters that we have five Catholics, three Jews and an Episcopalian raised as a Catholic on the Supreme Court. I think that that kind of categorization obscures more than it illuminates.”

During her coverage of the Burwell v. Hobby Lobby case, for instance, Lithwick discussed the justices’ decisions in terms of their personal religious backgrounds. But in retrospect, that was wrong: Her criticisms about the court’s disregard for science, or for the legitimacy of the dissenter’s faith, was an unfair treatment of the institution’s relationship with religion.

But it also has to be wrong for the court to treat sectarian religion as if it’s great for everyone, Lithwick added. Returning to the Town of Greece case, she rejected the notion that “politeness requires us to bow our heads and pray to a God that is not our own.”

“How are we going to get through this deeply intractable problem; what are we going to ask of our judges?” Lithwick said. “And I do think that what we can ask of (them) is empathy.”

By using the traditional “tools of religion” — respect, empathy, compassion, analysis, a presumption of good faith — there may be a path forward to “think about each other in a big-hearted way.”

The Constitution, as well, contains “some pretty amazing and ennobling moral traditions” and has its own vital part to play in charting a course through the quagmire of the church/state debate.

“I think that … the same principles of faith that are embodied in many different religious traditions are very much embodied in (the Constitution),” Lithwick said.

Religion and law both bring with them many mechanisms for empathy and understanding, all rooted in the underlying mediation between being “both very, very small and very, very large in the world.”

Perhaps it is not an accident, then, that the two biggest religion Supreme Court cases right now concern “the rubberized stuff on playgrounds … and cakes.” They are childish things on one hand, but they are also powerful symbols that people care deeply about. And what is faith if not “respect and reverence for other people’s symbols?”

“Faith, if it means anything,” Lithwick said, “has to mean looking to our justices and to ourselves, to our Constitution and to our neighbors, for the little spark of — dare I say it — the divine that makes us all brothers and sisters.”