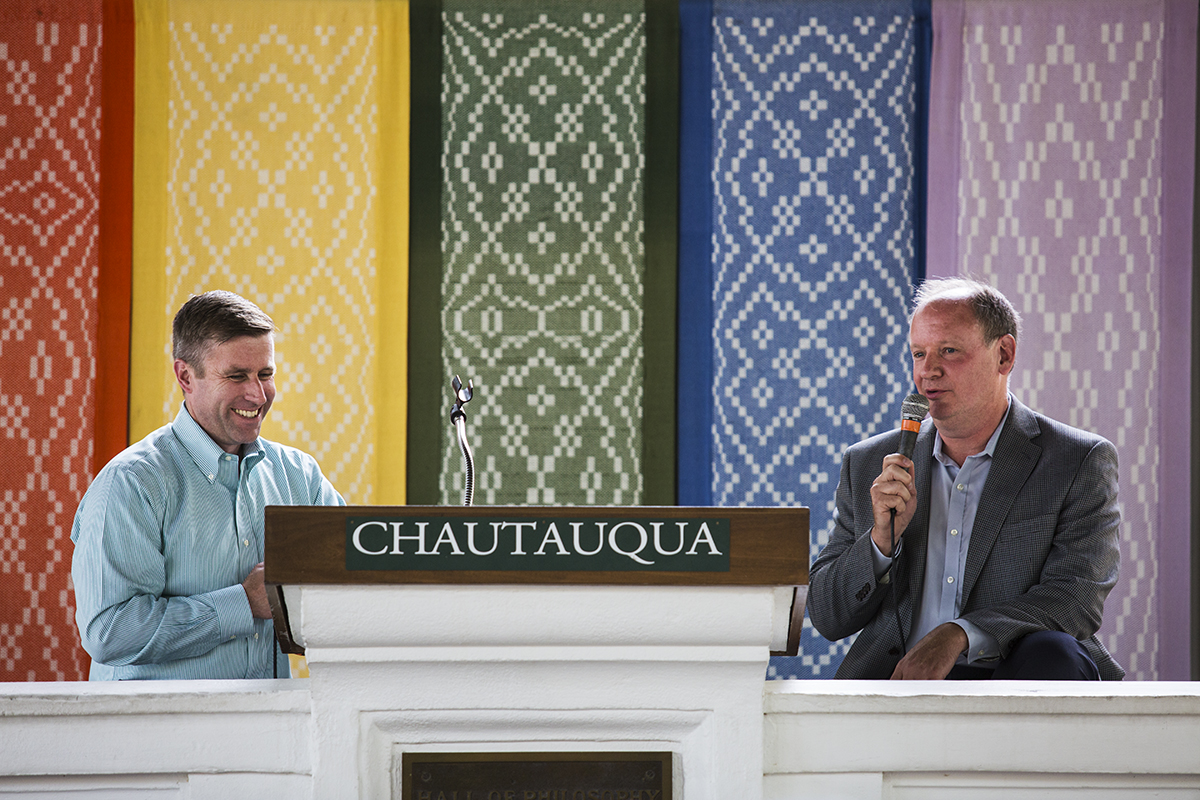 Darly Weinert, board chair of Youth For Understanding, speaks on “The Soft Power of Global Peacemaking, One Young Person at a Time” during Friday’s Interfaith Lecture Series with President Michael E. Hill. ERIN CLARK / STAFF PHOTOGRAPHER

Before Michael E. Hill became president of Chautauqua Institution, he was president and CEO of Youth For Understanding USA.

Hill and his former boss Daryl Weinert, chair of the board of trustees for YFU, talked about the nuts and bolts of this organization in a conversation titled “The Soft Power of Global Peacemaking: One Young Person at a Time,” as the conclusion to Week Four’s Interfaith Lecture Series, themed “Religion and Statecraft Today: the Soft Power of Global Peacemaking” Friday in the Hall of Philosophy.

Founded in 1951 in Ann Arbor, Michigan, YFU took shape when founder Rachel Andresen traveled to Europe with her husband, where she experienced post-WWII devastation. She and her husband were in Amsterdam the day the lights came back on, where Weinert said he thinks “a light bulb went off in her mind that day as well.”

Andresen wanted to “heal the wounds of conflict,” and she thought there was no better way to do it than by starting with young people. The first YFU group was 75 German and Austrian high school students, all with American homes ready for them. Eventually, the program grew so large that a headquarters needed to be built in Washington, D.C., “coordinating student exchanges of every permutation you could imagine,” Weinert said.

Weinert was part of one exchange when, as a high school student in 1980, he traveled to Spain. Even though the trip “literally and figuratively changed (his) life,” he slipped away from the organization to work elsewhere until he got a call in 2011 with a request for him to join YFU’s board of trustees.

“When you were on a journey in Spain, did you think, as a young person, that you were participating in peacemaking?” Hill asked. “A lot of people say, ‘Oh, it’s just kids going back and forth to different cultures,’ but why is exchange in and of itself part of soft power?”

Weinert said there was a complex set of reasons for going; he essentially grew up in the TV show “All in the Family,” as his parents were conservative Republicans while his three older siblings were more inclined to liberal ideas.

“One night I would be watching the Republican convention and cheering with my parents that Richard Nixon had been nominated by the Republican Party, and then the next day, I kid you not, I was surreptitiously delivering (George) McGovern literature with my brother in neighborhoods of the suburb in east Detroit where I grew up. For a 9-year-old, this was discordant.”

He said these opposing views sparked a certain curiosity; when he learned about YFU in high school Spanish class, he had an opportunity to act on it.

Hill referenced the “value of civil discourse at a discordant time,” both in the era of Weinert’s study abroad trip and in today’s political climate. He asked what the purpose was, then, for students to still go overseas amid global turbulence.

“You truly do not understand your own culture until you get out of your own culture,” Weinert said. “There’s just so much baggage associated in your own culture as you’re living it that you don’t even know, ‘What’s a part of my culture, what’s not, what’s core human values, what’s just cultural?’ ”

Weinert’s trip to Spain encouraged him to later join the Peace Corps, live in Nepal and participate in a volunteer program in Eastern Europe, providing him several opportunities to break out of his American perspective.

Since people “can watch a YouTube video about what it’s like to be in Spain or … Skype with someone over there,” according to Hill, being motivated to have a first-hand experience has changed.

“One of the challenges I know that we face, and that we hear from others, is that this notion of immersing yourself in a culture in person isn’t necessary because of the advent of technology,” Hill said. “Why do you think it’s still essential and part of this global notion of peace making … is that even necessary today even with the way technology connects us?”

Most YFU volunteers, Weinert said, would advocate for “the immersive experience” because after some time, “you are not a tourist anymore.” However, the organization is on the “Soft Power 30” and “Global Ranking of Soft Power” lists for their virtual exchange program, Hill pointed out. Weinert said an “embrace (of) these cyber tools” is healthy for the countries that are too dangerous to visit or wouldn’t let students leave.

When you were on a journey in Spain, did you think, as a young person, that you were participating in peacemaking?” Michael E. Hill asked. “A lot of people say, ‘Oh, it’s just kids going back and forth to different cultures,’ but why is exchange in and of itself part of soft power?”

Hill then asked Weinert about some of his favorite stories he has seen within YFU, but Weinert turned the question on Hill.

One day Hill’s assistant came into his YFU office and gave him a book, The Art of the Qu’ran: Treasures from the Museum of Turkish and Islamic Arts. His assistant told him their organization was sending a student from a Palestinian territory to a small town in Pennsylvania. Normally, the school board had good relations with the exchange program, but they refused to take the student as his visa documentation included the phrase “occupied territory.” The school board assumed the student was anti-Semitic. It led to one of YFU’s proudest moments: a presentation that proved the student had no anti-Semitic tendencies.

At the end of the American school year, the student went back to the Palestinian territory and his village was bombed. After two weeks of looking for him, YFU received an email where the student lamented, “I don’t understand how a country I came to love as my second home could endorse policies like that,” in reference to the bombing. Hill wrote back, hoping the student would understand “government and people are different … the lens of government is more complex,” and the student responded, “I’ll try, but it’s hard.”

“I don’t wanna sound Pollyanna-ish here,” Weinert said. “But this is not easy work. We as human beings, I think, we are very tribal by nature and that has served us well evolutionarily that we’re tribal, that we tend to be supportive of our nuclear families and our immediate tribe or our nation, whatever it might be.”

These “person-by-person experiences” YFU provides helps expand students’ minds, Weinert said. In its 66 years of operation, the organization has provided approximately 300,000 students the chance to study abroad — “one student, one family, one high school at a time.” Even though they might not be starting anything “earth-shattering” immediately after senior year, Weinert said YFU leads students to “all kind of amazing positions.”

Later, Hill asked Weinert about his family’s trip to Cuba. Even though the adult study tours are not the “bread-and-butter program” of YFU, the organization sponsored a group trip to Cuba, where Americans can only travel for “cultural and educational purposes.”

“I was a little worried about how my teenage kids would enjoy this trip,” Weinert said. “Because this was not a ‘Let’s go sit on the beach and play beach volleyball’ … this was a trip where we actually had a government ‘minder’ the entire time we were there, had lectures that were part of the trip.”

But, he said, his children “soldiered through it.”

“The poverty was breathtaking; the resilience of the Cuban people was inspiring,” Weinert said. “It really sent the message home loud and clear to my kids the importance of really protecting these critical institutions and freedom and the things we enjoy here every day in the United States.”

Hill said institutions seem to be the “glue that holds us together” and asked about lessons from these international institutions America can “craft a code” around.

After reading Jonathan Haidt’s book, The Righteous Mind: Why Good People are Divided by Politics and Religion, Weinert said he began to understand the emotional differences between societies.

“(Haidt’s) basic thesis is that as much as we as human beings like to think we are rational and fact-based in our decision-making in life, we are not,” he said. “We are still at the core of these intuitive means and we have knee-jerk reactions, emotional reactions to things. And then we use our rationality to kind of explain why we have that viewpoint. In today’s world, we can all go find justification for why we have our particular viewpoint. He, in that book makes the case … all of us have a complex moral structure that we figure out for ourselves. Some of that’s (affected) by our cultural upbringing, some of it’s just very personal.”

In the book, Haidt also addresses six moral attributes people have that provide natural conflict: care, fairness, liberty, loyalty, authority and sanctity. For example, when liberty is pitted against authority, it can be polarizing.

“I think what we all in this country need, right, left, … is a huge dose of humility to realize no single human being, no single political party, no single organization, even Chautauqua, (has) all the right answers,” Weinert said.

He theorized about YFU doing an exchange program within the United States — maybe sending a student used to life in Manhattan to a ranch in rural Colorado for a while.

The poverty was breathtaking; the resilience of the Cuban people was inspiring,” Daryl Weinert said. “It really sent the message home loud and clear to my kids the importance of really protecting these critical institutions and freedom and the things we enjoy here every day in the United States.”

In conclusion, Hill asked what will happen if organizations like YFU continue to succeed.

“Despite all of the problems we have as a world, I look back at human history and it’s ‘fit for progress’ … but it’s generally progress,” he said. “I remain hopeful that we are making progress; we are figuring out ways to truly understand each other.”

Sheila Schroeder will teach audience how to craft financial policies