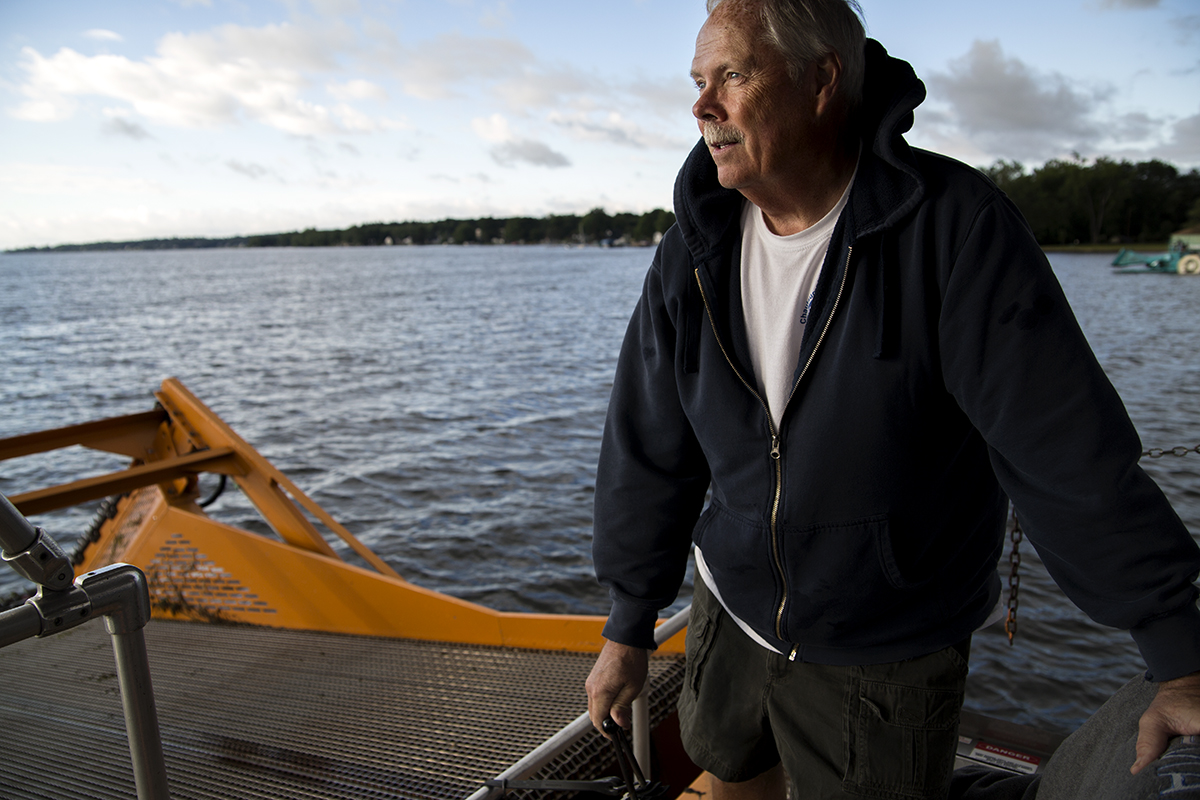 Steve Holland, of Mayville, New York, navigates a harvester boat out of the docks on Tuesday, June 27, 2017. Holland has been working with the Chautauqua Lake Association for three years. ERIN CLARK / STAFF PHOTOGRAPHER

With rain clouds looming above, Steve Holland pilots a hulking orange vessel across Chautauqua Lake before arriving in Dewittville Bay, where he begins to perform the work he does most days during summer: harvesting weeds.

“There’s a lot of weeds in this bay,” Holland said aboard one of the Chautauqua Lake Association’s aquatic plant harvesters Tuesday morning. “I’ll probably be here the rest of the week.”

The day’s operation came amid a pivotal time in controlling the lake’s excess vegetation. Several miles to the southeast in Bemus Bay, remnants from the application of herbicides the day before still lingered in the water.

Herbicides — chemicals used to control plants — were used in three spots in Bemus Bay on Monday as part of an effort by the Chautauqua Lake Partnership to manage invasive plants in the area. The last time herbicides were used in the lake was 2002.

The recent herbicide use came after the CLP, originally formed that year by residents annoyed with excess plants in the lake, applied for permits from the New York State Department of Environmental Conservation, first in April and later on June 19, 2017, according to the department. The permits were issued the next day.

The DEC permits allowed use of two kinds of herbicides, named Aquathol-K and Navigate, as part of a data collection project to evaluate their effectiveness on invasive weeds, DEC spokeswoman Megan Gollwitzer said.

“We’re trying to do something to introduce different techniques to take care of the weed and algae problem,” said CLP President Jim Cirbus.

The herbicide company SOLitude administered the application Monday, and the CLP placed signs around the lake warning residents to not use, fish in or swim in the water near Bemus Bay for 24 hours. The original DEC permits included such a warning that would last for 14 days, but the department later issued revised permits with the 24-hour warning.

In addition, the waters near the Institution were deemed safe for swimming Monday by the Chautauqua County Department of Health and Human Services, according to a letter from the department.

Such use of herbicides has been both applauded and denounced by residents, with some pointing to how the excess weeds inhibit boat use and others suggesting that the chemicals will hinder native plants and fish, among other problems.

When it comes to managing vegetation, though, the most visible effort remains that of the harvesters and other machines used by Holland and his colleagues in the CLA.

“We’ve gotta be able to get people around their docks so they can get in and out,” Holland said. “I mean, why have a boat on a lake if you can’t use it?”

Why the weeds are a problem

As of Monday, the CLA had harvested about 2 million pounds of weeds, Holland said. The association, a nonprofit organization incorporated in 1953, uses six harvesters to collect plants throughout the lake, said Doug Conroe, executive director and former Chautauqua Institution director of operations.

“The machines cut off the top of the vegetation,” Conroe said. “Some people say it’s like mowing your lawn.”

The harvesters collect the excess plants and either drop them off at the shore or load them onto a transporter boat that does so, he said. The weeds are then moved via trucks to farms for use as compost.

The plants, she said, create problems for recreation on the lake by limiting mobility around docks and wrapping around boat motors and propellers.

The only large-scale solution to that problem at the moment is mechanical harvesting, according to the Chautauqua Lake Macrophyte Management Strategy published in March. The plan includes strategies of how to “open the toolbox to a broader range of management options,” including herbicides.

Evaluating the risks of herbicides

The use of herbicides, though, raises questions for some about how its application could affect the environment, while others insist that risks are minimal.

Why might the herbicides be harmful? Bowman said research she has both read and conducted show problems, which include harming native plants and destroying spawning beds for fish.

A study published in March titled “Lessons from a Decade of Lake Management,” for example, found that herbicide use is unpredictable and can harm native plants in some instances.

“As a whole, the lake is a very dynamic system with many smaller ecosystems in it,” Bowman said. “It’s hard to address it as one big body of water.”

But Bowman and Conroe both point to how herbicides might impact another problem in the lake: algae blooms.

Conroe said Chautauqua Lake is very rich in nutrients, such as phosphorus, and when too many nutrients exist, the cellular plant algae can form. As algae matures, water around it becomes harmful, he said, and it can become toxic in certain spots when the algae “blooms.”

“If you kill some stretches of these plants, the decomposition is going to add nutrients that feed algae,” Bowman said. “Several studies show this.”

Cirbus and others in the CLP, though, disagree that herbicides are harmful. The herbicides are specific to the species of invasive plants, he said, and shouldn’t harm the few native ones that have survived.

The group followed the DEC’s regulations “to the letter,” Cirbus said. The partnership also raised money for shoreline cleanups to reduce algae growths this summer.

“Too much is at stake,” he said. “Hopefully herbicides will be a thing of the future in conjunction with other methods.”

Back on the lake, though, Holland and others in the CLA will continue their harvesting operations across the lake throughout the summer.

“We get a lot of thank yous, very few complainers,” Holland said. “For the most part, it’s rewarding because you get some gratification out of it.”