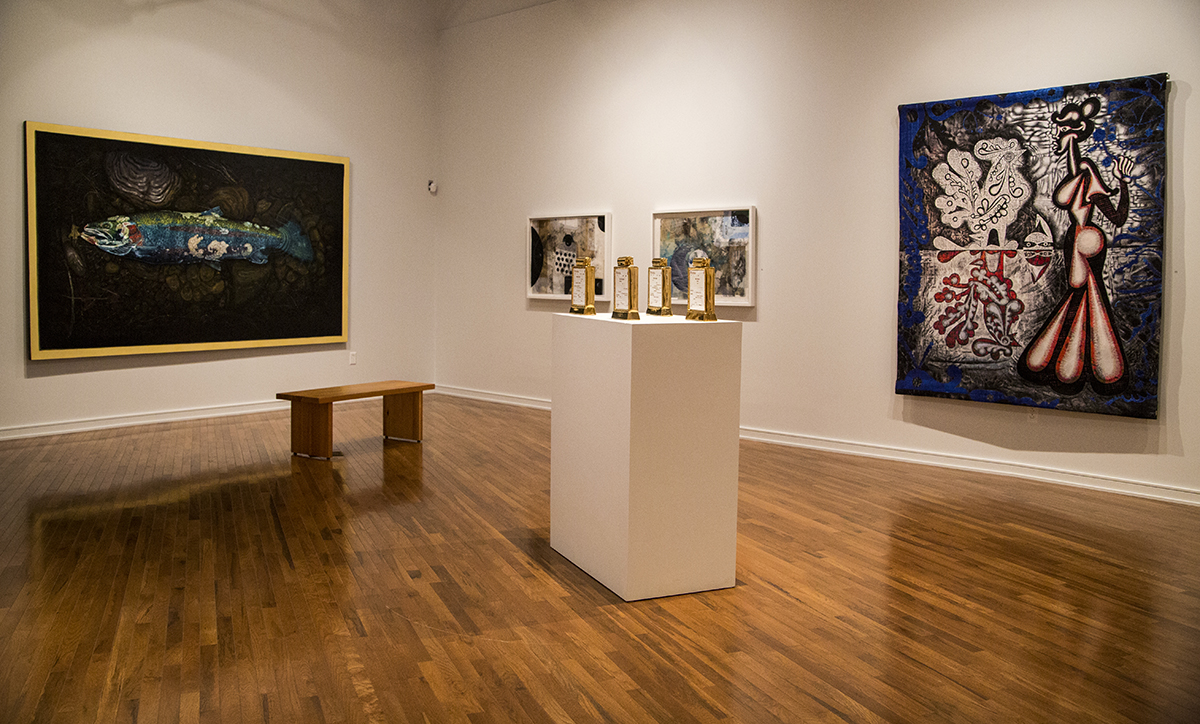 If great minds think alike, so do great artistic minds.

“Homage to Mango Street,” an exhibition showcasing the work of seven contemporary Latino artists, overlaps with Saturday’s Chautauqua Symphony Orchestra premiere of “Mango Suite” by composer Derek Bermel and this afternoon’s Chautauqua Literary and Scientific Circle Roundtable presentation from Sandra Cisneros, a MacArthur Fellow and the author of The House on Mango Street.

The show, which opened June 25 in the Gallo Family Gallery of Strohl Art Center and runs through Aug. 21, was curated by Don Kimes, Visual Arts at Chautauqua Institution’s artistic director, and Denise Bibro, a gallerist based in Chelsea.

Since before the 2016 presidential election, Kimes was thinking about the “walling-off” of immigrants and their descendents during a time when issues surrounding immigration to the United States are highly controversial.

“The way the country feels so divided right now, I think it’s – it’s sad,” Kimes told the Daily earlier this summer. “And so this is my little effort at building a bridge.”

It worked out well that Kimes’ goal of showcasing this work came about when two other areas of the arts at Chautauqua are also celebrating Latino artists throughout Week Four, which is themed “Geopolitics Today: A Partnership with CSIS.”

That’s not to say that the “Homage” show always deals with geopolitics.

Alberto Rey, an artist whose appears in the show, is more interested in fish. His large painting “Aesthetics of Death VII” depicts a decaying rainbow trout, but it’s about a lot more than scales.

Rey, an Orvis-endorsed fly-fishing guide who leads trips in western New York, lives near a stream that fills with rainbow trout during the spawning season. These are large fish, he said, growing between 24 to 30 inches, and seeing a dead rainbow is sad for him.

“They have this long, rich life of moving into the lake and coming back every year to spawn,” he said.

Rey started collecting photos of the dead fish he saw, without knowing what he would do with the images or why they stuck with him. When both his sister and father-in-law passed away from cancer a few years later, Rey started looking at the photos again. He decided to paint these dead trout, seeing a metaphorical value in making the fish larger than life.

“These paintings are large because they’re meant to kind of reflect the vitality of life,” he said. “The painting is very colorful and full of brushwork and paint, but it’s also portraying a creature, like ourselves, that is very fragile. We can be put down by a number of illnesses or circumstances that we experience.”

His painting reflects how the size of a life cannot be grasped through just the size of a body. He set out to “make something bigger than life,” he said.

Regarding the title of the work, Rey said he hoped people would notice the aesthetics of the piece, and hopefully “get some kind of intellectual connection to the work.”

Linda Vallejo’s piece “Drunken Revery” also demands a kind of intellectual engagement. Hers is both the only three-dimensional work in the show and the only one that directly addresses one of the difficulties of being Latino in the United States — the lack of positive representation of Latinos in media. While browsing an antique mall for inspiration, several liquor decanters printed with tiny reproductions of paintings by Norman Rockwell caught her eye.

She asked herself what these objects would look like if she were to repurpose them into something that would represent her culture and her point of view.

She ended up painting over the characters in the Rockwell scenes to shade their skin brown, something that she said upsets some people.

“But imagine me — I’m just like a little kid with a crayon, painting her doll brown,” she said. “She wants the doll to be like her.”

Painting “Dick and Jane brown,” she said, changes everything.

“Life is filled with all kinds of interesting questions,” she said. “Making art allows you to talk about these things in a way that is inviting and palatable to other people.”

Henry Bermudez, a Philadelphia-based artist, has three large pen-and-ink drawings in the show. He too is curious about how others engage with his artwork.

“I would like to see more of how people react in front of my art, how they are connected, if they really understand my purpose as an artist,” he said. “That would be very interesting for me, very educational, just to see if I really am doing my art in connection with the idea of my vision, connecting with the people.”