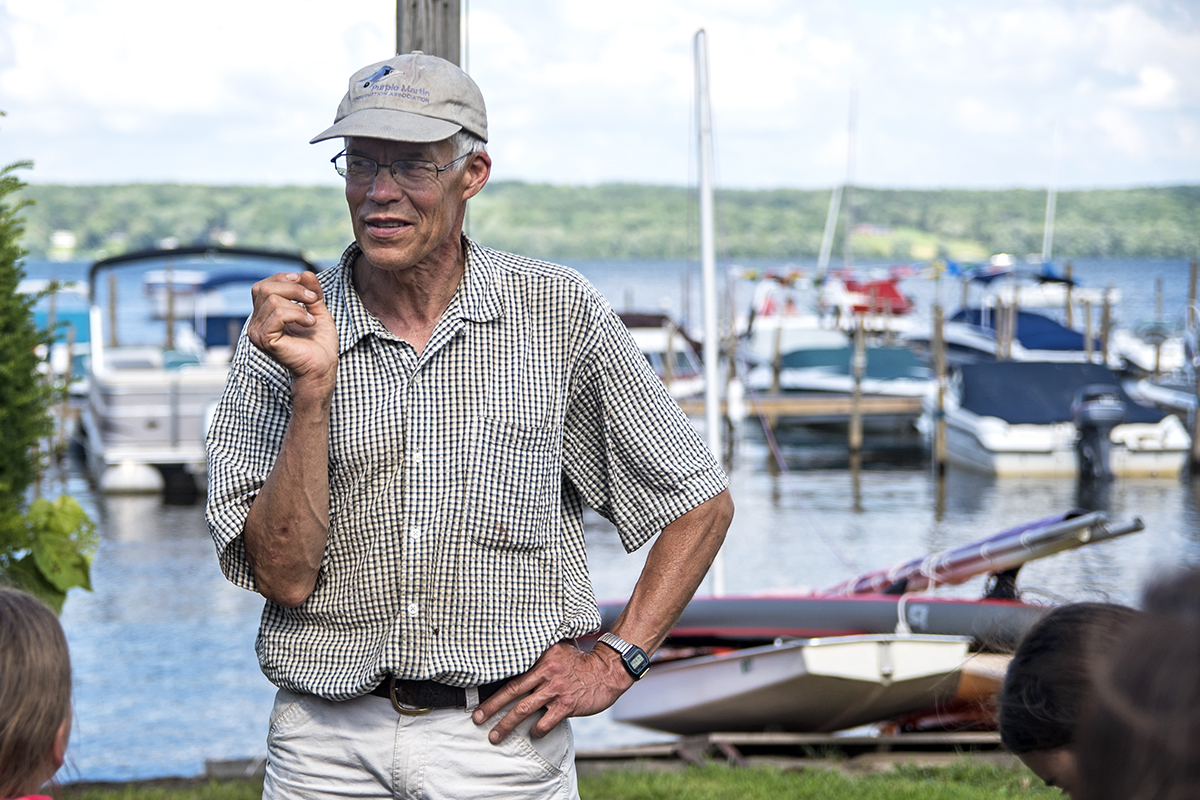 Turning a metal crank, Jack Gulvin lowers a large, white structure down a wooden pole near the Chautauqua Lake shoreline. He carefully removes a small box from its compartment, handling a squawking baby bird while replacing the nest’s pine needles and checking for parasitic maggots.

“I think the most attractive things about the purple martins are their calls, their chatter and their tremendous flying abilities,” he said. “You’ll see ’em rocketing in like jets.”

Gulvin will give the last Purple Martin Chat of the season at 4:15 p.m. Friday, lakeside between Miller Bell Tower and the Sports Club, before the birds leave the area to begin their migration back to South America. Attendees of the Bird, Tree & Garden Club event can ask questions and watch how Gulvin handles the birds and their housing boxes.

Most of the bird’s population is completely dependent on humans for housing and have been for centuries, dating back to Native Americans who would house birds in gourds, Gulvin said. At Chautauqua Institution, Gulvin manages five poles with 102 compartments where purple martins reside to reproduce in the spring and summer.

Though he’s been working with the martins since 2000, Gulvin said, his interest in birds began when he was a teenager and birded with the Jamestown Audubon Society. He went to earn his bachelor’s degree in forest management at Syracuse University and worked at the U.S. Department of the Interior and the National Park Service.

The baby martins are nearly a month old now, Gulvin said. Both the young and adults usually depart from Chautauqua at the end of July, dwell around the region while feeding in August, gradually migrate to South America in the fall and return here around the end of March, he said.

“Then they’re looking for the exact same compartment where they bred successfully in the previous year,” Gulvin said.

Until the birds leave, though, Gulvin will continue his work lowering and raising the housing boxes and caring for the nests.

“I stock each nest compartment with dry white pine needles,” Gulvin said. “There’s nothing better than the dried needles of the white pine tree.”

While purple martins are common, their population is declining in the eastern United States, according to the National Audubon Society. Their numbers are down at Chautauqua as well, Gulvin said, but the birds born in the nests he manages have about a 90 percent survival rate.

“They’re kind of social, sort of like people living in an apartment building,” Gulvin said. “You get ’em in the right light, and they’ll look purple.”