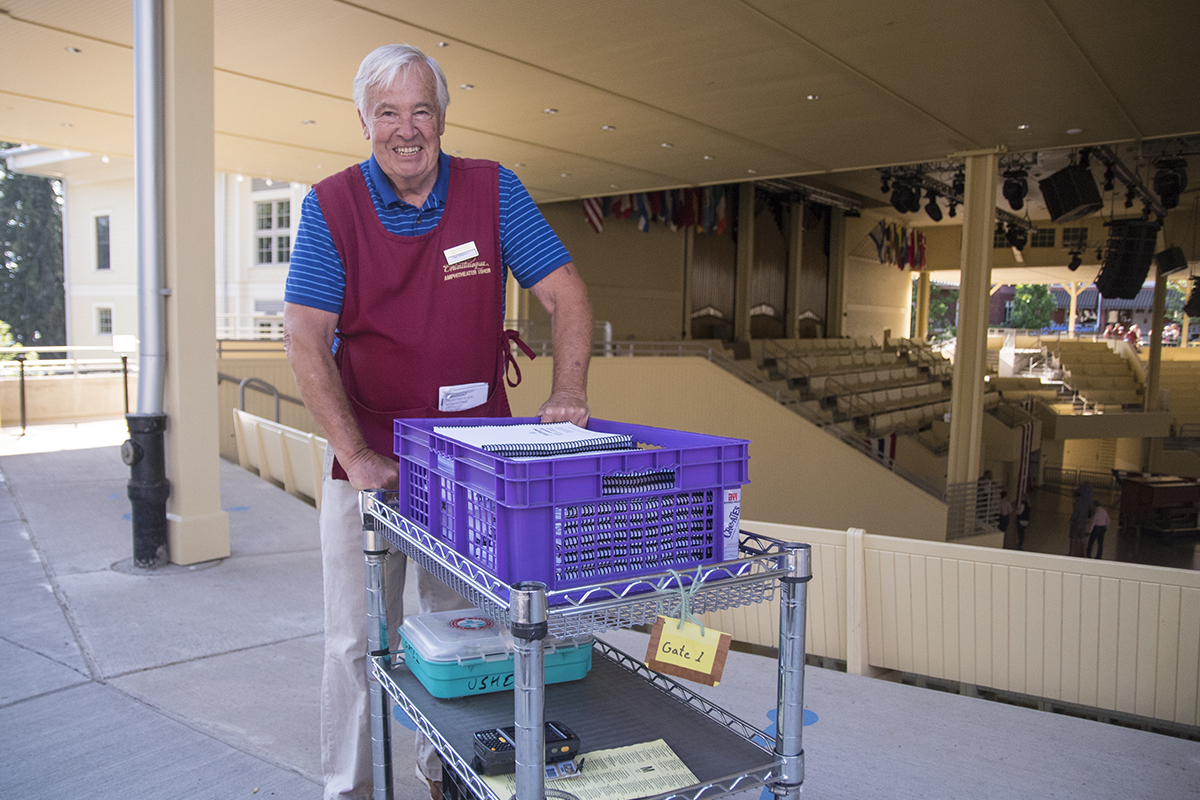 Jay Petersen, Amphitheater morning usher, after his daily rounds of book deliveries on Monday, July 3. Petersen is a native of Las Cruces, New Mexico, and has worked at the Amp for five years. OLIVIA SUN/STAFF PHOTOGRAPHER

Jared Jacobsen has produced a new morning worship book to bless the new tent at Chautauqua, the rebuilt Amphitheater.

“This is my laboratory. I want to make people ponder, to think and to broaden their view of worship,” said Jacobsen, organist and coordinator of worship and sacred music. “Chautauqua has always shaped my faith journey, and this new book reflects where I am on that journey.”

This is the third worship book that Jacobsen has produced for Chautauqua Institution. He started in 1996 with the Sunday worship bulletins and in 1997 introduced the first daily worship book.

“I wanted a book that was not so big that it was unwieldy, but also to provide something substantial for people to have in hand,” he said. “I did not want it to be just a piece of paper, a disposable hymnal for a disposable church.”

It was 11 or 12 years before he re-edited the worship book. The first one began to feel cobbled together. He began to pay more attention to the preaching. There was more of an emphasis on social justice. The music of Taizé was becoming more common and language of the Iona Community was being used more, he said. Jacobsen was also influenced by former Department of Religion directors the Rev. Ross Mackenzie and the Rev. Joan Brown Campbell and their love of language.

One of the hardest parts was getting copyrights for the hymns. Because Jacobsen sees worship as a laboratory, he included hymns that he thinks people should get to know. He likes to see if a hymn has “legs”: whether he will come back to it and use it again.

“Almost everything in the last book was used at least once,” he said.

Someone shared the hymnal, Voices United, from the United Church of Canada, which led him to use more Canadian music. He wants the hymns to reflect the growing interfaith emphasis at Chautauqua.

“I did not do much with the music in the new worship book,” he said. “I will save that for next time.”

Jacobsen wanted to take care of all the typographical errors in the old worship book. Moreover, even though there were 10 daily services in that book, 1-5 and A-E, he felt the need for more variety.

Each week has its own arc — festive, contemplative and then concluding the week. Each week’s services follow a slightly different arc and really cannot be switched around, he said. Jacobsen decided that a third week of services was needed to provide the variety he was seeking.

Some of the liturgies were inspired by chaplains-in-residence at Chautauqua and the writings of the former directors of the Department of Religion, as well as people like Brother Roger, the founder of the Taizé Community.

What to name the services in the new series proved to be a conundrum. Jacobsen tried naming them after the colors in the rainbow, but that did not really work. With a group of friends, he hit upon the idea of naming them after directors of the Department of Religion. He started with the Rev. William N. Jackson, then Mackenzie and Campbell, followed by the Rev. Robert M. Franklin Jr. and the Rt. Rev. V. Gene Robinson, who will assume leadership of the department on Sept. 1.

Jacobsen wrote “Litany for a Chautauqua Week,” which is used every Friday during morning worship. He wanted to write something for a service and was encouraged in his effort. For many who attend morning worship, it is the highlight of the week.

“I love helping people to sing and pray,” he said. “This is the job I always wanted.”