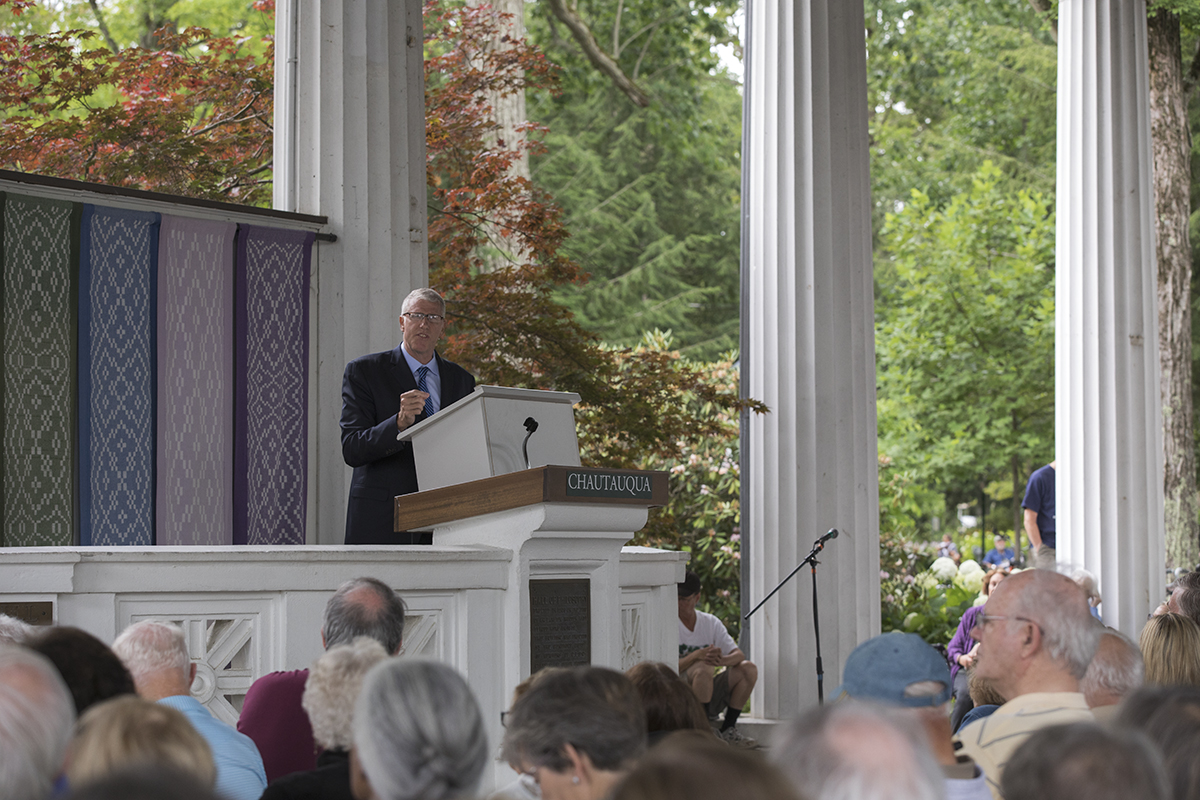 Senior vice president and editor of Voices on Auburn seminary Paul Raushenbush delivers his speech on "Prophetic Witness in the Progress towards America." on Monday, July 24, 2017 in the Hall of Philosophy. Hall of Philosophy. PAULA OSPINA / STAFF PHOTOGRAPHER

A pastor behind bars for nonviolent protest, discouraged by the unequal treatment of races, theorizing about what it would mean to live in a fair society — this was Martin Luther King Jr. in his Letter from Birmingham Jail.

This was the introduction for the Rev. Paul Brandeis Raushenbush’s lecture titled “Prophetic Witness in the Progress Towards America,” as part of Week Five’s Interfaith Lecture Series, “The Supreme Court and Religious Communities: Holding America Accountable?,” Monday in the Hall of Philosophy.

“King questions those who decry the nonviolent struggle for justice, without being doubly outraged by the unjust laws that denigrate and humiliate his brothers and sisters, and that are, at the root, reasons that make up protest,” said Raushenbush, an ordained Baptist minister and senior vice president and editor of Voices at Auburn Seminary.

He said there is one especially “stirring line” in the Declaration of Independence that expressed King’s sentiments.

“The Declaration holds that each one of us, merely because of the fact that we were born, has unalienable rights that are bestowed upon us by the divine,” Raushenbush said. “When we are talking about holding America accountable, this is the principle that we are referencing. It is a soaring vision of divine justice that convicted America even before the ink dried.”

Americans were in violation of their Declaration.

“Where (were) the rights of freedom and life for the millions of slaves for whom these words were a vicious reminder of the subhuman way they were viewed and treated by their captors?” Raushenbush asked. “Where was the freedom to pursue happiness for women who were entirely dependent on men for their ability to live freely? Native Americans, non-landowners and many others were implicitly or explicitly not included in this original just vision set forth by the founders of our nation. The history of America is one of often bitter and painful progress made by prophetic voices that caught the vision and believe deep in their souls that all are created equal.”

To be prophetic, Raushenbush said, is not equivalent to being biblical.

“To be prophetic is to live in the world in a particular way that focuses your heart, your mind and your spirit on creating a more just world in accordance with the vision that sustains you,” he said.

Raushenbush introduced two individuals shaping his personal vision of prophecy — Walter Rauschenbusch, a central figure to the Social Gospel movement, and Louis Brandeis, the first Jewish Supreme Court justice — known more fondly to him as his great-grandfathers. (The Raushenbushes have since dropped the Cs from their name).

Both early 20th-century public figures, the men might be described as prophets at a time when the majority of people were in the midst of “irregular employment, lack of working protection (and) a nonexistent safety net.”

When Oregon was attempting to limit the working hours of women, Brandeis spent months compiling data about the adverse effects of long shifts on women with his sister-in-law Josephine Goldmark. And at the Rauschenbusch’s family table, the Encyclopedia Britannica was their most common guest of honor, the family dedicated to facts.

Rauschenbusch’s first pastoring job was in Hell’s Kitchen on Manhattan’s West Side — but before it was the “latte-sipping place it is now.” Instead, it was named for the poor living and working conditions of his congregation. Most notably, Rauschenbusch remembered the funerals of children who had preventable, poverty-induced deaths.

“With eyes still wet with the tears shed over deaths of little children that only happened because of an inhumane economic system, Rauschenbusch went back to the Bible and saw clearly the prophetic witness that cried out against this kind of injustice,” Raushenbush said. “His entire ministry became dedicated to transforming the economic and social systems so that God’s kingdom of heaven and equality might come on earth as it is in heaven.”

There was nothing more important than understanding the “Bible’s social context in a historical setting” to Rauschenbusch. He wanted his community to have access to the “essential purpose and direction of its own inspired book.”

As for the nation’s literature, Brandeis may have been the first, Raushenbush said, to refer to the Constitution as a “living organism, capable of growth and adaptation.”

“This approach allows the fresh context of the present to perform alchemy with the wisdom of the past, to offer new ways to make the law and faith relevant and responsive to present conditions,” he said. “Prophetic witness cannot set its gaze backward on a frozen history with an unrecognizable context. Instead, it faces forward, informed by the past, yet determined to bring back vision into the world in the present age.”

Brandeis’ opinions about freedom of speech, the right to privacy, state regulation of business and the creation of minimum wage, Raushenbush said, were often his most powerful contributions to the law. It was not uncommon for Rauschenbusch to be critical of the legal system as well.

“(Rauschenbusch) also saw the facts and went back to his sacred text and raised his voice against the prevailing view,” he said, “insisting that the indifference or otherworldly approach that Christians have taken to matters of justice in this world showed a lack of love, understanding and reverence for the very Lord they professed to serve.”

According to Raushenbush, his paternal great-grandfather spent most of his life “being reviled as a heretic in pastor’s clothing.”

“For the last 100 years and even today, Rauschenbusch is a ‘byword’ for apostasy in more conservative Christian circles,” Raushenbush said. “Be(ing) willing to dissent and face approbation of the leaders of your time requires moral courage. It means being willing to present a view that many — especially many with power — will not appreciate and who will try to harm your reputation or worse.”

And even if it might have been controversial in Rauschenbusch and Brandeis’ time, they were both committed to the “inner vision that carried work forward throughout their lives,” Rauschenbusch operating on the principles of the Lord’s Prayer and Brandeis wanting every person to have an opportunity to contribute to society. Brandeis’ mother said she hoped to instill particular values in her children.

“I wanted to give them something that neither could be argued away nor would need to be given up as untenable,” Brandeis’ mother, Frederika, said. “Namely a pure spirit and the highest ideals as to morals and love.”

In any case, Rauschenbusch and Brandeis both believed that every generation had something new to offer to the makeup of morality. And their great-grandson believes the same of today.

“We believe in the role of prophetic witness for moving us closer to the project that is America, and we believe that all have a role to play and that we must play that role,” Raushenbush said.

He said our nation is in a critical time, listening to “the echoes of Dr. King writing from Birmingham Jail, wondering as to our response.”

Raushenbush cried out for “truth-tellers who can tell the facts and voices who can dissent,” those who work to address the disenfranchisement of black voters, issues in the criminal justice system and incidents of police killing black people. In the midst of anti-Semitism, Islamophobia, xenophobia and white nationalism, Raushenbush said, something has to give.

“We need prophetic witnesses that proclaim the dignity of women and the right to be safe from abuse and to make decisions about their own bodies,” he said. “We need prophetic witnesses who protest the rollback of environmental protections, who take seriously the role that an opioid crisis is destroying rural communities and leading to skyrocketing mortality and suicide rates, predominantly among white men. And personally, I am fearful that the advances of LGBT(Q) people could be rolled back. And that my marriage and family could be threatened. I am in the need of prophetic witnesses to surround and support my community and me. We are at a moment of crisis in our country, and yet, I have hope. Can I get an amen?”

Brandeis summarized this motivation to make a legacy the next generation would be proud of: “The most important political office is that of the private citizen.”

“In a few years all our restless and angry hearts will be quiet in death, but those who come after us will live in the world which our sins have blighted or which our love of right has redeemed,” Rauschenbusch wrote in his book Christianity and the Social Crisis.

Drawing on the words of his great-grandfathers, Raushenbush concluded with a call to action.

“Our nation needs us,” he said. “Let us answer and become America together.”