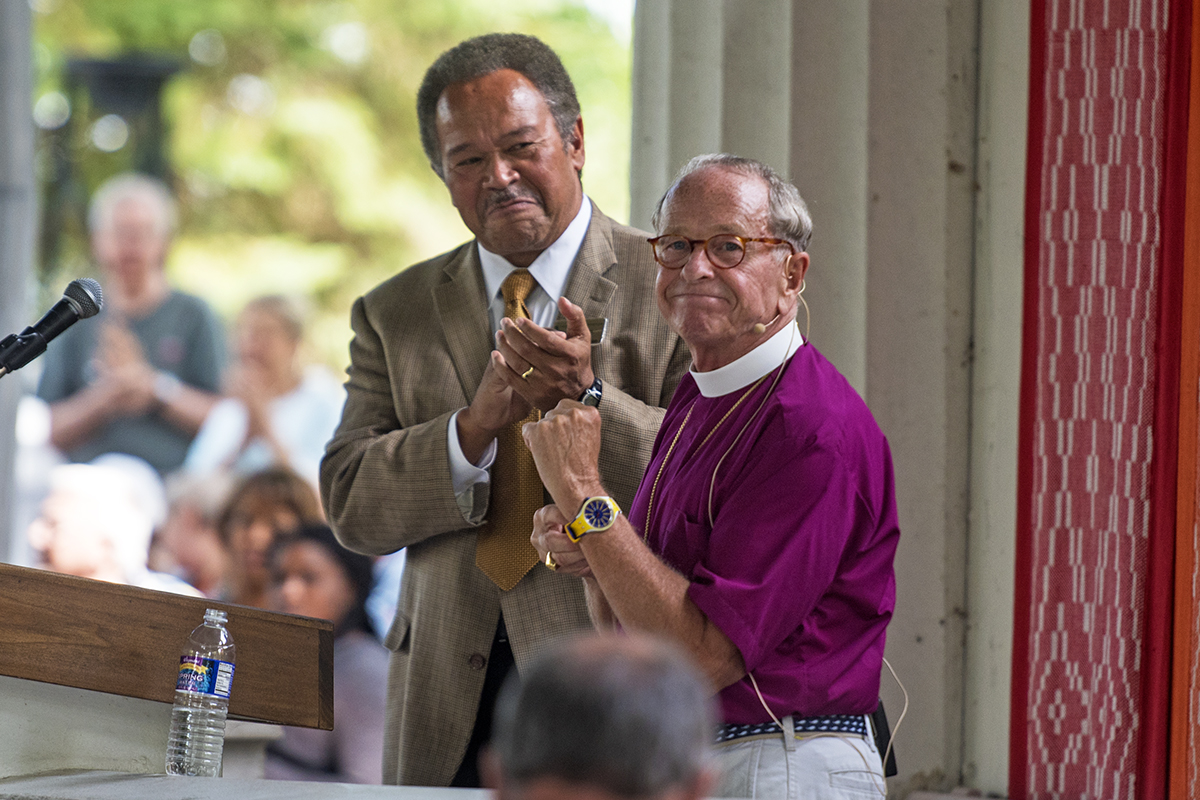 In the literature speakers received prior to giving their interfaith lectures this week at Chautauqua Institution, they were asked to reflect on how how the teachings of Martin Luther King Jr. were “informing the moral compass of the nation today.”

This question encouraged the Rt. Rev. V. Gene Robinson to think instead about America’s moral path, which he discussed in his lecture “On America’s Moral Highway, Does the Supreme Court Provide Guardrails or an Off-ramp?” as part of Week Five’s Interfaith Lecture Series “The Supreme Court and Religious Communities: Holding America Accountable?” Wednesday in the Hall of Philosophy.

“Do we understand the role of the Supreme Court to provide guardrails on that highway, making sure we don’t stray too far from our moral center, keeping it in the road, so to speak?” asked Robinson, the first openly gay priest to be elected bishop in historic Christendom. “Is the Supreme Court, at this particular moment in time, in danger of interrupting the guardrail of that highway and instead building off-amps that allow us to go careening off in the territory that takes us far from our moral center?”

Either way, he said, America is at a dangerous crossroads — pun intended.

“What is the dance being done today by church and state in today’s America?” he asked. “And who gets to choreograph that dance?”

It’s difficult to say, Robinson said, because the first 16 words in the First Amendment provide a complicated routine. Today, the definitions of The Free Exercise and the Establishment Clauses incite several “hot-button issues.”

Local, state and federal government are “seeking to find holes in the wall of separation between church and state,” according to Robinson. Recent proposals by President Donald Trump, for example, have sought to subvert the Johnson Amendment, a revision declaring no 501(c)(3) nonprofit company is able to endorse a political party or candidate.

“Financial contributions to political candidates and campaigns would unleash an unprecedented opportunity for big money and big corporations to flood our electoral process with even more money,” Robinson said. “Churches could become black holes for dark money to come into our electoral process without a requirement of reporting the sources of those funds, and I, for one, cannot imagine that to be a good thing.”

Robinson is also worried about the broad protections for religious practice in the 1993 Religious Freedom Restoration Act, which the Supreme Court cited and broadended in its 2014 landmark decision in Hobby Lobby v. Burwell. That decision struck down the contraception mandate provision in the Affordable Care Act, also known as Obamacare, which required employers to provide contraceptive coverage for female employees. Hobby Lobby protested on religious grounds.

“It’s as if the Supreme Court adopted Mitt Romney’s assertion that corporations are people and that Hobby Lobby has religious freedom rights,” Robinson said. “If so, it makes you wonder, doesn’t it? Where Hobby Lobby worships, what does it pray and to whom and how does it ask forgiveness?”

The proposed First Amendment Defense Act, which prohibits the federal government from taking action against an individual based on a religious belief or a sincerely held belief that marriage is between one man and one woman, is a “bad penny (that’s) going to keep turning up again and again,” Robinson said.

If laws are ignored in favor of this “sincerely held belief,” he said, anti-discrimination laws are pointless. For example, during the civil rights movement, some white Americans claimed they “sincerely held” the belief that the races were not equal, so by the same logic, their argument would be justified.

“What I’m describing is a tug of war being waged between mostly evangelicals and Roman Catholics, I’d argue on the one hand,” he said, “and mostly progressive Christians, Jews, humanists and ‘nones’ on the other for the moral soul of America.”

Robinson wondered what Americans wanted the Supreme Court to do for them in these polarizing times.

“We can’t go to the public square and argue for Jesus’ views or Muhammad’s views or the Hebrew prophets’ views to be used as our standard,” Robinson said. “It may be Jesus, or Muhammad or Isaiah, who is the inspiration for my own personal civic devotion and justice work, but in the public realm, I cannot tell someone else to do anything simply because my god or my religion says so.”

The Constitution and Bill of Rights call for a government who values the dignity of the “other,” Robinson said.

“Dignity is what you have in a nation whose Declaration of Independence declares ‘we hold these truths to be self evident,’ ” he said. “Dignity is what happens when there is liberty and justice for all and … as obvious and unremarkable as that assertion might seem, it actually turns out to be quite complicated after all, which is why we need a Supreme Court.”

While we all use the word “dignity,” Robinson said he’s “not exactly sure if we mean exactly the same thing when we use it.” He explained there are two types of dignity. Whereas intrinsic dignity is something in all human beings, not to be gained or lost, extrinsic dignity is the dignity humans assign to one another or to themselves, based on whether “perceived attributes are admirable or condemnable.”

For example, when someone commits murder, their overall dignity depreciates. However, protocol is not that they starve to death or are tortured — acts that would ruin their intrinsic dignity — but they are punished, putting their extrinsic dignity in jeopardy.

Robinson hopes dignity is at least respected in the church.

“In nearly every LGBT(Q) person’s journey, there is a traumatic story related to religious condemnation,” Robinson said. “It’s time we apologize and make restitution — at least, emotional restitution.”

Even though this condemnation is often justified by a “love the sinner, hate the sin” mentality, Robinson said denial of same-sex relationships is seen more like a denial of a core component of the “sinner’s” intrinsic dignity.

This dignity comes to the surface in the Supreme Court justice’s views of LGBTQ people. While Justice Anthony Kennedy’s words’ about marriage were “music to LGBT(Q) ears,” Justice Neil Gorsuch used to argue against personal autonomy, according to research done by Rebecca Buckwalter-Poza, a fellow with the Legal Process team at the Center for American Progress.

The Masterpiece Cakeshop v. Colorado Civil Rights Commission case — more commonly called the Colorado cake baker case — is a tangible example of the Supreme Court harming a same-sex couple’s extrinsic and intrinsic dignity, Robinson said. This, and the lack of LGBTQ protections in 29 states, exemplified to Robinson that the work for progress is not over.

“You can legally get married on Saturday,” Robinson said, “that night, be refused a room at your honeymoon hotel, be refused service at a restaurant the next morning, return home that night to find that you’ve been kicked out of your apartment and return to work on Monday morning to find that your boss read about your wedding in the newspaper and you’ve been fired from your job, all for the simple fact that you are or are perceived to be gay, and you have no recourse in the courts in 29 states.”

Even though the wedding cake could have been designed at a bakery down the street, Robinson said, African-Americans in the 1960s did not have the leisure to find lunch at another lunch counter. The most important thing to Robinson is the public dignity of LGBTQ people, even if this treatment “is commensurate with the personal opinions and … theologies of the vendors.”

America is in an unstable time, Robinson said, but now more than ever, when taking into account Trump’s tweets regarding transgender people in the military and Gorsuch’s appointment to the Supreme Court, “every moment seems to be fraught with potential peril.”

“If all that doesn’t keep you up at night worrying, then you simply aren’t paying attention,” he said. “Really.”