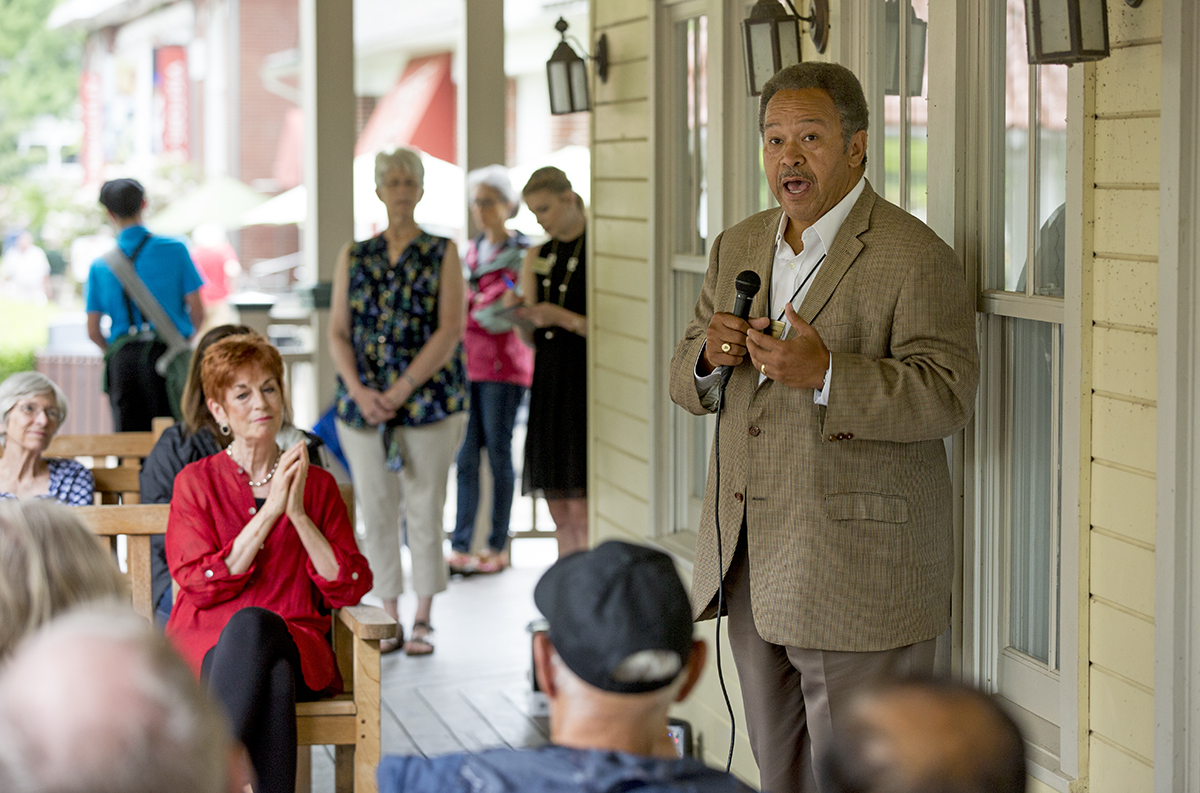 It will be a new role for Franklin, who’s spent the past four seasons as the Institution’s director of religion. And looking back at those four years, Franklin had “four principle elements” that inform the department’s work and that have grown in scope and inclusivity.

The first, according to Franklin, is the opportunity to deepen one’s spiritual life and journey.

“That really speaks to the work at Chautauqua at the multiple avenues for prayer, meditation, public worship and private reflection and meditation,” Franklin said at Wednesday’s Porch Discussion at the Hultquist Center.

He cited the Mystic Heart Meditation Program as an example of exposure to “other traditions, new paths, new approaches, new practices” for the aforementioned, rather than more traditional and familiar avenues.

The second, Franklin said, is the importance of interfaith literacy. He described the 2 p.m. Interfaith Lectures Series as “more intellectual in its content and rigor,” that serves as a way to examine “religiously informed understandings and responses to life’s pressing questions.”

He reflected on enjoying the process of selecting, with Institution senior staff, 45 different speakers to come during the season to engage with the weekly themes.

“We provide, I would say, religious, ethical, philosophical, secular and humanist approaches to the theme of the week,” Franklin said. “We aim for variety and diversity, not simply the big five perspectives of Hinduism, Buddhism, Judaism, Christianity and Islam, but beyond.”

Franklin also cited the Abrahamic Program for Young Adults as an initiative that is helping the Institution reach millennials. Each season, one Christian, one Jewish and two Muslim coordinators are selected to provide leadership and guidance for programs that appeal to a younger demographic.

The third is nurturing the next generation of leaders.

The New Clergy Program is an application-based, weeklong experience that brings together clergy from Abrahamic faiths who have had as little as two years of experience for “discussions focusing on issues and experiences of theological growth, leadership, shared community, social justice and the dynamics specific to those clergy new to religious leadership and congregational work,” Franklin said. This season’s conference, taking place during Week One and Week Seven, is themed “Sustaining and Enriching Clergy Leadership for Congregational Life.”

“I’d invite you to think about the three most pressing challenges in your community, in your neighborhood,” Franklin said. “What are the things that people stay up at night worrying about? Those represent, for me, the real moral challenge to community and peacemaking.”

He said his hope is that Chautauquans will have exposure to “experiences, examples, role models, citizens and leaders who are doing things in the world that involve promoting the common good — women and men who live with integrity, with courage and with imagination.”

Franklin also discussed another significant challenge that continues to loom in the first three weeks of the season, that in addition to “religious difference, ignorance, conflict and demagoguery … are issues of ethnic and racial difference.”

“We continue to grapple with challenges of race and difference in America,” Franklin said. “We need to a better job. We’re not doing what Dr. Martin Luther King Jr. inspired and challenged us to do — that is, create a beloved community. We believe that faith communities can play a significant role in creating greater racial understanding, collaboration and coalition, and peacemaking in the world.”

Maureen Rovegno, the current associate director of religion, will become the department’s director this fall.

“He and I are of one heart and mind where all of our work has been concerned and where the department has been going and will continue going,” Rovegno said.

She lauded Franklin for the “absolute value that his presence has been, and will continue to be.”

Rovegno brings to her new role a multitude of experiences, including having taught interfaith studies to high school students.

“We have the benefit of someone who is familiar with young people, has taught young people, understands the psychology, and understands, perhaps better than anyone on the grounds, the traditions that represent the interfaith family,” Franklin said.

Franklin and Rovegno opened up the discussion to field questions and comments, including from Sabeeha and Khalid Rehman, who give Islam 101 lectures at 3:30 p.m. on weekdays in Hurlbut Church.

“Every time I come to Chautauqua, I am standing in a church, talking about Islam and playing recordings of the Quran, and where else do you see this example?” Sabeeha Rehman said. “I really appreciate the opportunity and the welcome and the warmth that we have here.”

Khalid Rehman suggested that, going forward, he’d like to see incorporation of “spirituality through music and dance” in the form of groups and people who could perform songs and rituals that are associated with prayers and devotionals in Islam.

Deepak Puri questioned how a Muslim community could find a real home at the Institution without a place to gather.

Rovegno responded by explaining that the Everett Jewish Life Center at Chautauqua, which opened in 2009, was a project that was independently funded by the Jewish community at the Institution.

“The Everett Center is a wonderful example of what can happen when it comes from the grassroots,” Rovegno said. “We had achieved a wonderful critical mass of Jews here who then decided, ‘We need a place to gather.’ … We do need a critical mass of any individual or group that would like to have a visible and active presence here.”

“We hope the momentum will increase exponentially so that we can have that interfaith center here that would be representative of all faith traditions and be so inclusive of those that are not visible in the active way here,” Rovegno said. 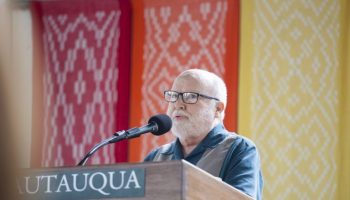