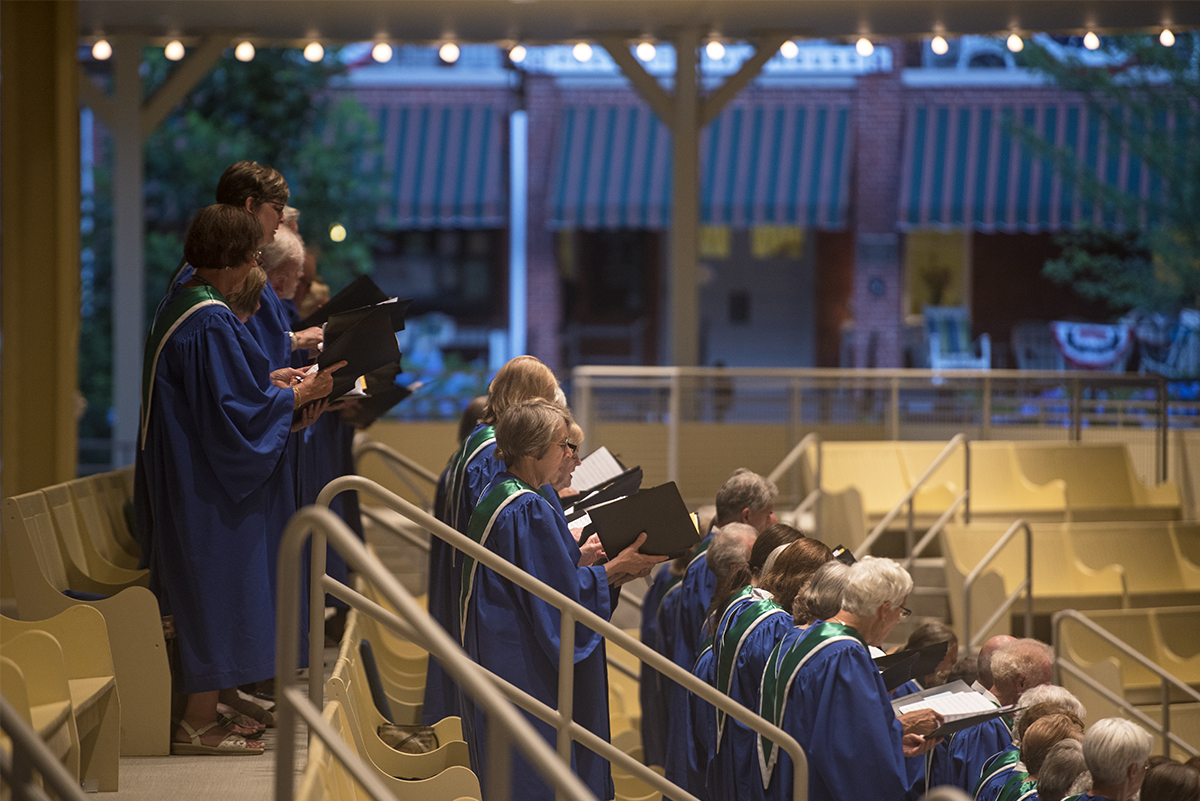 Members of the Chautauqua Choir on Sunday, July 16, in the Amp. OLIVIA SUN/STAFF PHOTOGRAPHER

Don’t be alarmed by the sounds of Christmas carols coming from the Amphitheater on Sunday evening. Yes, it is still July.

But that won’t stop Chautauquans from celebrating the holiday they won’t be able to spend all together. At 8 p.m. Sunday in the Amp, the Chautauqua Choir and Jared Jacobsen, organist and coordinator of worship and sacred music, will perform a Sacred Song Service program titled “Mary, Mother of God: Christmas in July.”

Jacobsen said while he creates a Sacred Song Service program based on Christmas nearly every year, he tries to bring a new focus to it to keep it fresh. This season, he is concentrating on Mary, the mother of Jesus, who he said is featured in much more Christmas music than Joseph is.

The song that will set the theme for Sunday’s performance is “Annunciation Story” by Richard Dirksen, who wrote it for the Washington National Cathedral in 1975. It is the story of Mary learning of her pregnancy from an angel, which sets the stage for the rest of the Christmas narrative.

“The musical language is very spare,” Jacobsen said. “The focus is on the story.”

One of the anthems the Chautauqua Choir will perform is “The Snow Lay on the Ground,” arranged by Julian Wachner for the Trinity Church Wall Street in New York City, which Jacobsen said is one of the most experimental churches for music. He said the piece was “dazzling” and wanted to perform it because not many Chautauquans would hear it in their home churches.

Although Jacobsen noted that it is unclear if there was snow on the ground when Jesus was born, there definitely is plenty of it at Chautauqua during the winter season. While Jacobsen said he’s only been at Chautauqua during the holidays a few times, he tries to check in on the Bestor Plaza livestream at least once to see the snow twinkling in the light of the beautifully decorated trees on either side of the plaza.

“It really is like a fantasy-land Christmas,” Jacobsen said.

There will also be numerous carols for the congregation to perform, including “O Little Town of Bethlehem” and “O Come All Ye Faithful,” which Jacobsen said is one of his favorites.