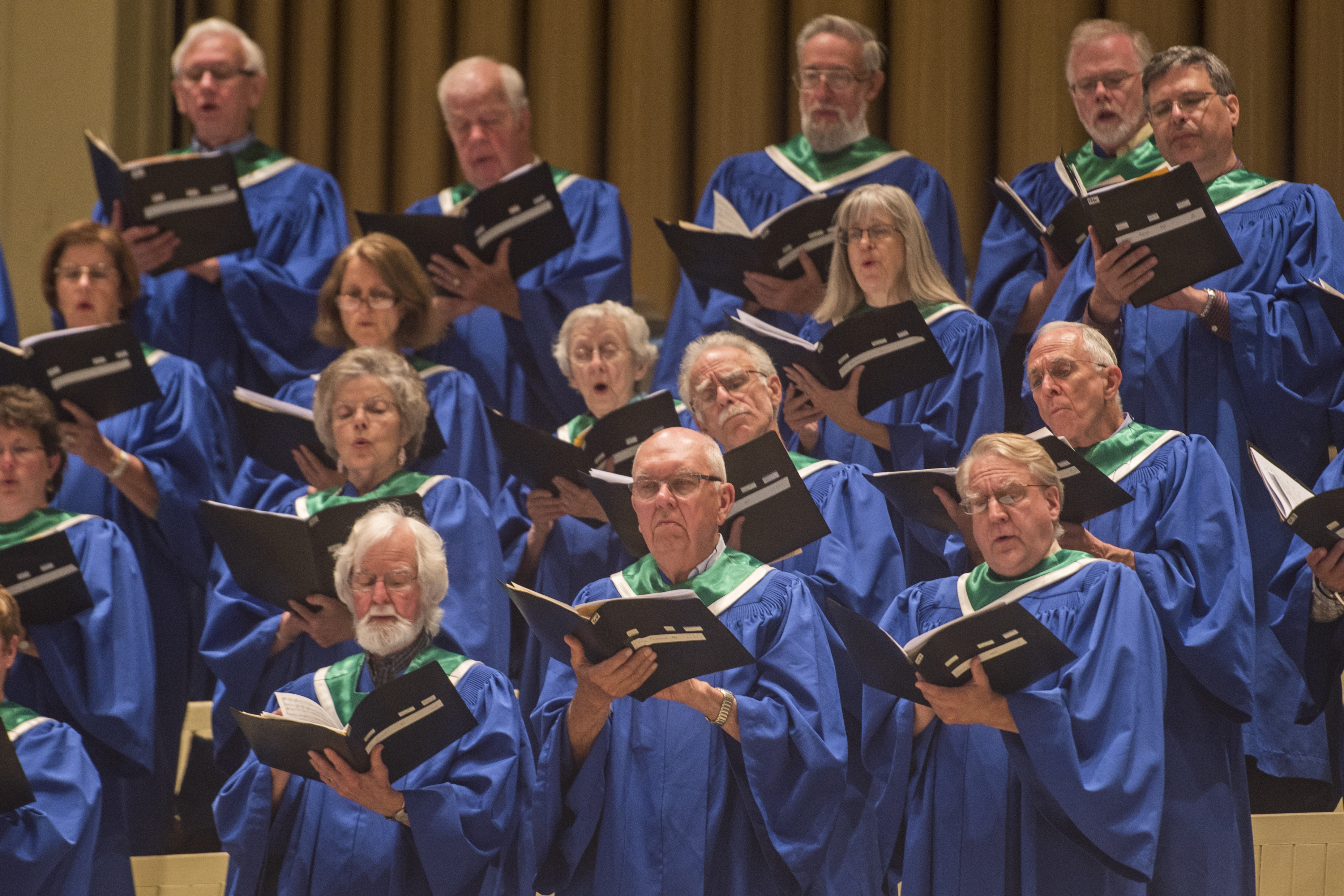 Choir members at Sacred Song Service on Sunday, July 9 in the Amp. More than 125 singers participate each Sunday throughout the season. OLIVIA SUN/STAFF PHOTOGRAPHER

It is easy to say that Chautauqua would not be Chautauqua without the grand lake and charming gardens.

This weekend, the Sacred Song Service will celebrate the beauty and intricacy of these creations with the program, “This Is God’s Wondrous World.” Jared Jacobsen, organist and coordinator of worship and sacred music, and the Chautauqua Choir will take the stage at 8 p.m. Sunday in the Amphitheater. Jacobsen said he designed the program to evoke a sense of appreciation for Chautauqua Institution’s natural features.

“This is a stunning little corner of the cosmos, it seems to me,” Jacobsen said.

The anthems that the choir will sing are more risky than usual, Jacobsen said, but they create starkly different visuals of God’s creation.

“Hlonolofatsa,” a South African song from the Soweto Gospel Choir, is the first piece in the program and breaks from the norm of Sacred Song Service because it will be sung in the Sesotho language. Jacobsen said the youth choir he works with in California sometimes complains about having to sing in another language, but the song only works in Sesotho because of the language’s roots in natural sounds.

Jacobsen said the second choir piece, “Turn the World Around,” by Harry Belafonte, is the oddest choice of the group because it has nothing to really do with church. The calypso beat and eloquent words, though, evoke a strong vision of a glorious planet.

In an effort to honor the beauty of the United States, Jacobsen included “Shenandoah” in Sunday’s service. He said he thought Shenandoah Valley was one of the most beautiful places in the region, and the song beautifully showcases that.

The most risky choir song in this program, Jacobsen said, is “Mi’kmaq Honour Song” as composed by Lydia Adams. The concept of the song is inspired by the music of the Mi’kmaq indigenous community of Canada, Jacobsen said. In the song, the choir’s voices come together to form a single note and then individuals break off to make animal sounds.

Although he is taking some risks with the choir pieces, Jacobsen said the program will include classics for the congregation to sing along to. These include “For the Beauty of the Earth” and “Joyful, Joyful, We Adore Thee.”

Jacobsen said he is excited to see how the drums and nature sounds play out in the new Amp, which is part of the landscape of Chautauqua.

“We’re lucky because we have a concert hall that’s in the middle of the woods, basically,” Jacobsen said. “And if you just sit and listen quietly, you hear all of these things around you.”