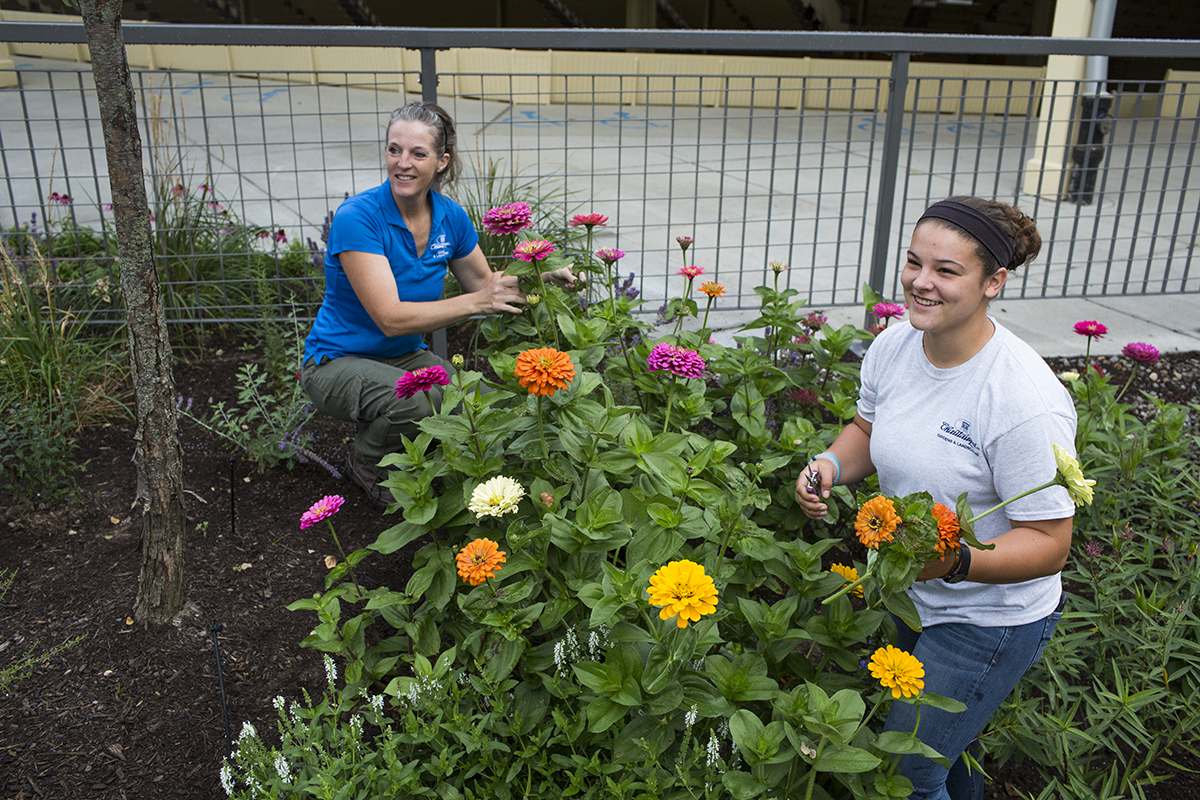 As Betsy Burgeson looks ahead to another busy off-season of planting, pruning, tending, and generally nurturing and replacing the gardens around the grounds, the new Amphitheater is at the center of her plans.

An early morning tour of the Amp grounds began with the Carnahan Jackson Garden, the tranquil oasis on the brick walk near Gate 3 at the southwest corner of the Amp. It has been off limits all summer, having been selected during last off-season as the best location for one of the giant cranes helping to put in place great steel girders and other heavy components of the Amp’s superstructure.

Burgeson, the Institution’s supervisor of gardens and landscapes, said the Carnahan Jackson Garden was originally established in 1968 in its distinctive Japanese style.

“Here’s an interesting coincidence,” Burgeson said. “In 2009, one of the best students in the master gardening class I conducted through the Cornell University extension service for the county was Marty Carnahan, whose family had helped to establish that beautiful garden over 40 years earlier.”

The signature garden will be restored in its former style and form, Burgeson said, with the added benefit that invasive species will be removed.

“We will use mature plants to get it back as soon as possible to its earlier condition,” she said.

“They were the first to endow one of our new rain gardens in Miller Park last year,” Burgeson said. “We’re all very excited about making beautiful what has been obviously incomplete all summer.”

Burgeson said she has had crews watering and deadheading three times each day the already-extensive plantings and rain gardens elsewhere around the Amp.

“It’s taken a lot of our time, but the results, as well as the positive comments, have made it all so gratifying,” she said.

In addition to the area surrounding the Amp, the Bird, Tree & Garden Club’s outdoor laboratory at the Arboretum in Chautauqua’s Overlook neighborhood south of the ravine will be the beneficiary of special off-season gardens department attention.

At the Arboretum, 20 trees were removed after the recent Institution-wide census — mostly diseased hemlocks and sassafras, Burgeson said. In collaboration with the BTG, 23 new species of trees and 15 new types of shrubs have or will be introduced in the rectangular city block-sized plot.

“We are learning all the time at the Arboretum, and one of the biggest things is seeing what kinds of plants will grow in the shadow of some of our mature trees up there,” she said.

“It’s one of our best-attended programs,” she said.