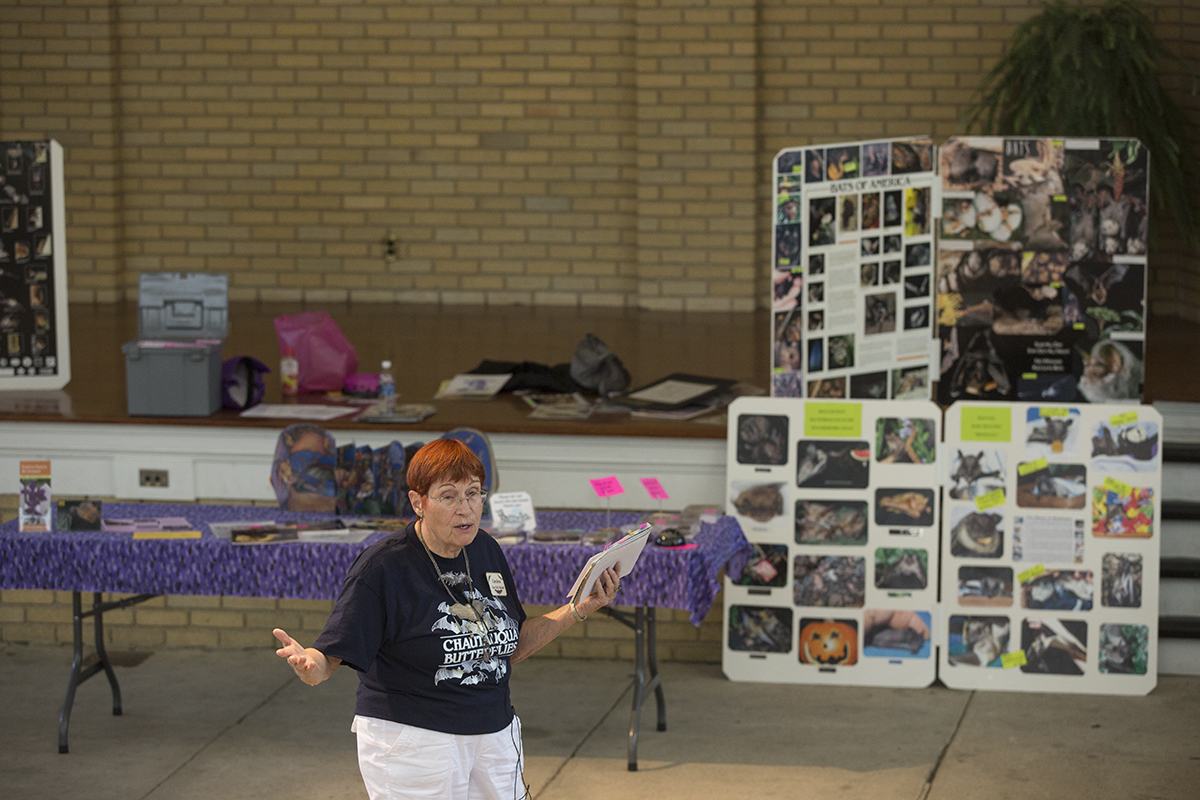 Bats were a constant presence in the summers Caroline Van Kirk Bissell spent at Chautauqua while growing up in the ’40s and ’50s.

“We had lots and lots of bats. We grew up with them,” she said. “It was normal to see ’em around the lake.”

Now, Chautauqua’s population of little brown bats, once a common sight on the grounds, has been largely decimated due to a disease called white-nose syndrome.

“They’re just a more fragile bat,” Bissell said. “They have no immunity, and it just wiped them right out.”

Bissell will give the last Bat Chat of the season at 4:15 p.m. Wednesday in Smith Wilkes Hall for the Bird, Tree & Garden Club. Her talk, open to all ages, will include a plethora of information on bats of the world and ones that still live in the Chautauqua area.

Since she started doing BTG’s Bat Chats in 2000, Bissell has been educating Chautauquans about different species of bats, their diets and their benefits to ecosystems.

Bats also benefit people, she said, by eating pest insects, pollinating crops and producing “guano,” or poop that works as a fertilizer.

“They do a lot of things for us, and we do nothing for them except make their lives miserable,” Bissell said.

Many bat species around the world are endangered or vulnerable because of habitat loss and fragmentation, decreased food supply, destruction of roosts and hunting of bats, according to the Bat Conservation Trust.

Locally, western New York’s population of little brown bats was severely impacted by white nose syndrome, which emerged around 2008 and killed millions of bats in 31 states, according to the U.S. Geological Survey.

The disease involves a white fungus that infects the skin of hibernating bats’ muzzles, ears and wings.

About 10,000 little brown bats lived on the grounds before the disease hit, but now the population is mostly gone, Bissell said. Other species of bats still dwell in the area, though, such as big brown bats, she said.

Bissell encounters such bats when performing her other main job at Chautauqua: rescuing bats that get stuck in people’s homes.

She recommends that those trying to get rid of a bat in their house open their doors and windows to help the creature escape.

Overall, though, her goal in presenting Bat Chats is to teach people that bats are “wonderful” and that people shouldn’t be afraid of them, she said.

“If I can turn any of my little audience participants into a naturalist or an environmentalist, to love the world of animals and critters, then I will consider my job well done,” Bissell said.