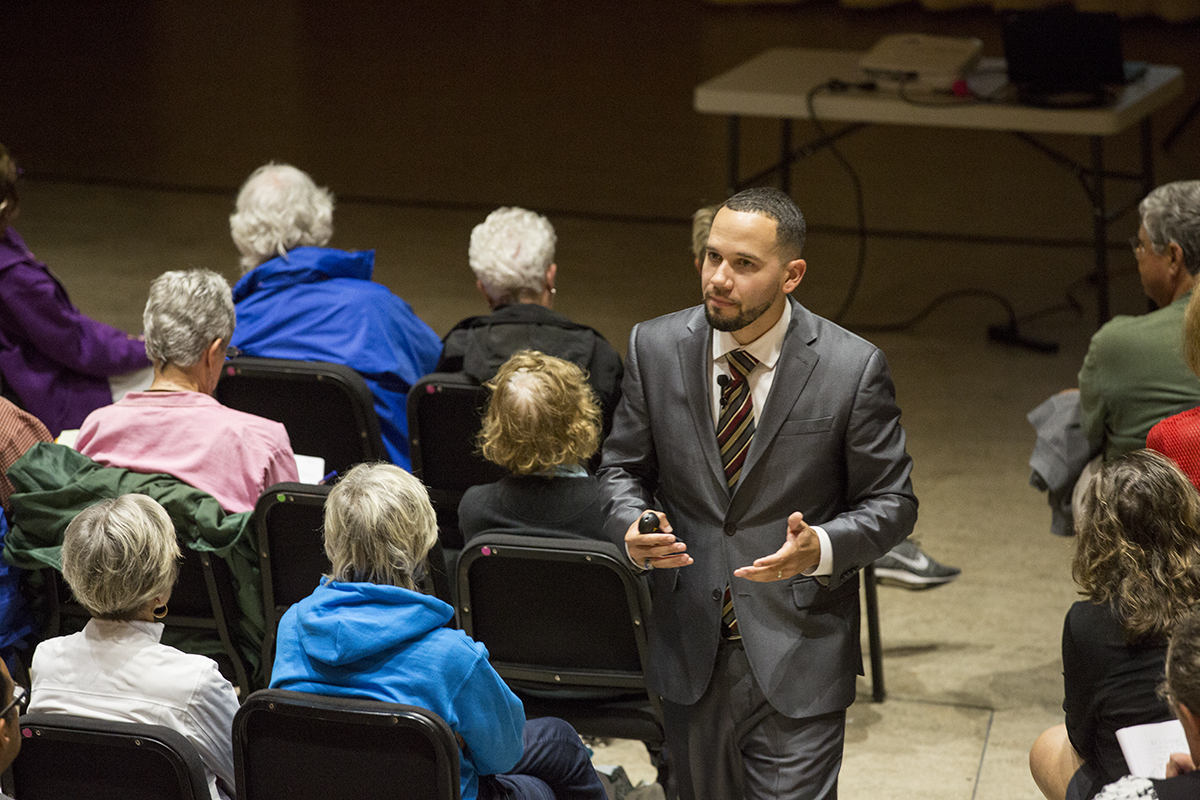 “How might we think about that in the context of community and nation?” Hill asked. “Our country’s at a place where we’re struggling to talk if we disagree.”

Emily Morris, the Institution’s vice president of marketing and communications and chief brand officer, introduced Carter and explained that Eileen Aranda, president of CLU, could not appear as scheduled. CLU, which was founded in 2011 in part by a donation from Chautauquans Joan and David Lincoln, is a nonprofit, online program for master’s and certificate programs in ethical leadership, social impact and interfaith action.

Carter, the dean of the ethical leadership program at CLU, began by describing his experience arriving at Chautauqua.

“It feels like ‘Cheers,’ a little bit,” he said. “Somebody knows your name.”

At least, a few Chautauquans thought they knew his name. On his first day on the grounds, Carter was twice mistaken for Shaun King, who gave the 10:45 a.m. lecture on Aug. 8.

“A lady said, ‘I really loved your presentation,’ ” Carter recalled. “And I hadn’t given it yet.”

Carter’s actual presentation was divided into four sections, based on the Claremont Core values of mindfulness, dialogue, collaboration and change.

For mindfulness, Carter began by showing a black-and-white photo and asking the audience to tell him what they saw. People pointed out that there were three African-American women facing a white man in a military uniform. It looked like he was interviewing them. The building they sat in, with its bare walls, appeared to be a temporary structure. And based on the hairstyles and dress of the people in the photo, it looked like the photograph was taken in the ’60s.

Carter said that the photograph popped into his mind when he heard the phrase “muscular civil dialogue.” He explained the backstory of the photograph.

In 1965, planes were undergoing testing at McConnell Air Force Base outside of Wichita, Kansas. On Jan. 16, seven men took off in a KC-135 Stratotanker, carrying 31,000 gallons of jet fuel. It crashed in an African-American neighborhood of Wichita, a city that was very segregated at the time.

Twenty-three people were killed, dozens injured and many homes were destroyed. The photograph was taken after the crash, a situation that presented a “great need for dialogue,” Carter said. In the aftermath, the Air Force offered families relief, but Carter said few accepted.

“The real challenge was two communities that didn’t talk to each other,” Carter said.

Carter said more mindfulness on the part of those trying to help would have been beneficial.

“Mindfulness considers the other party,” he said. “Mindfulness removes a judgmental barrier to civil dialogue.”

Carter defined dialogue as “the ability to think together.”

“There’s an old proverb,” he said, “ ‘Beware of one hand clapping.’ Beware of that — dialogue does not sound like that.”

Dialogue definitely creates discussion, he said, and maybe some debate.

“It’s always good to have people around you who do not necessarily agree with you,” he said.

Entering into dialogue means trying to find a way to reframe the problem.

“You can never solve problems with the same level of thinking that created them,” Carter said.

Carter is interested in the problem-solving aspect of dialogue.

“You learned, you engaged in dialogue, but now, what do you do?” he asked. “You know you’re engaged in true dialogue when there’s an action taking place at the end of that.”

Carter said engaging in muscular civil dialogue takes practice. “People say they want to talk,” he said, but often are just waiting for the other person to stop talking.

“They want to jump right in the conversation,” he said, but true dialogue means listening. “You’re giving space for the other side to articulate what they would like to say.”

Carter’s definition of collaboration is making square pegs fit in round holes — it’s innovation. He sees the story of the Apollo 13 crew as an exemplary model of collaboration.

On April 14, 1970, as the Apollo 13 spacecraft journeyed toward the moon, its oxygen tank exploded. Technicians on the ground assisted the astronauts by talking them through makeshift repairs with available materials, and the craft safely returned to Earth on April 17.

“If there was no collaboration, three astronauts would have died,” Carter said. “Collaboration is innovation. If you’re truly collaborating, something should be birthed out of that.”

“The world has never not been changing, ever,” Carter said. “Change is a must, but change requires a change of mind.”

To create change, Carter said one must constantly be learning.

His thoughts aligned with a quote from the philosopher Eric Hoffer: “In a world of change, the learners shall inherit the earth, while the learned shall find themselves perfectly suited for a world that no longer exists.”

Change, the final aspect of the Claremont Core, brings together the rest of the core values.

“Being aware, being fully present, in the moment, with the person, or people, that you are with, to truthfully engage them at that time,” he said. “People know when you’re not listening to them, and people just want to be heard.”

“Ask yourself, ‘What could we achieve if we worked together?’ ” Carter said.

“You have to seek that out,” Carter said. “Who are the people that you know, or don’t know, that you want to be involved with to collaborate with on a project?”