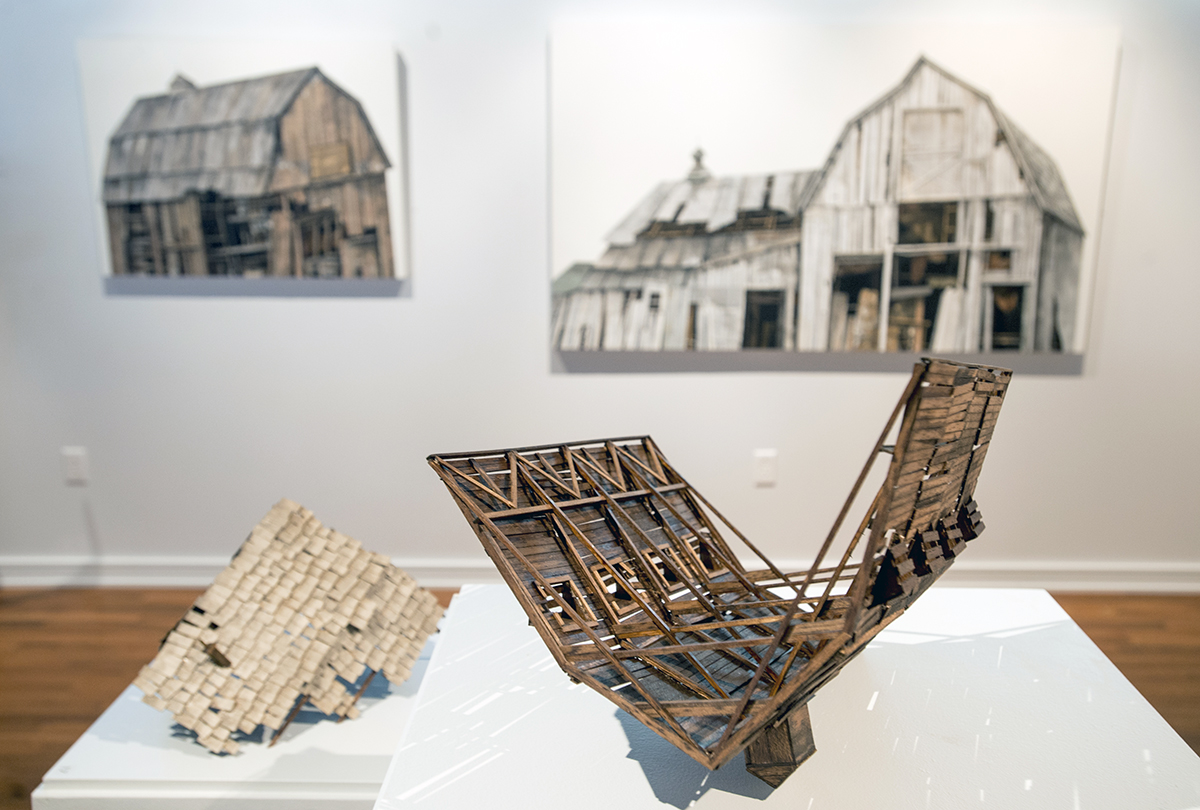 These new pictures called “Barnscapes” are more like halls of mirrors. They are not scapes at all, though they are metaphors for the long stalk of a scape, a plant part that reaches from the bulb underground and up, up, up to the flower, such as a tulip.

“Barnscapes” also presents a long connection between the idea of reality and the germination of illusion. It is a made-up word, something like landscape, though these images are falling- down barn parts and whatever remains, often hulking remnants of a structure that may become part of that larger picture of all that can be seen, both nature and nurture.

These images are cutouts from that larger reality.

And, indeed, they literally are worked up cutouts from found paper made by Pittsburgh artist Seth Clark. They bounce ideas around, like mirrors, like photographs. Here’s how it goes:

Clark cuts out of found papers a pre-figure of a falling-down barn, tilting this way or that, some wood facing missing, or right down to the structure, windows gone, seeing into the darkness behind the missing. He then paints the papers with charcoal, pastel, acrylic, graphite and collages piece parts where necessary, using polyvinyl alcohol as a glue to connect the papers, now attached to board. Likely, then, the artist paints some more; there’s no stopping an artist.

In shades along the grayscale from black to white (with a few in barn red), the 15 collage paintings in the Strohl Art Center look like photographs. Truly.

She: Not quite. Look. There, somewhere they are off.

He: Of course the picture is off.

Yes, they do trick the eye. Looking into the negative space, dark interiors are revealed by missing boards and broken windows and roofs that have caved or blown away.  Where present, the peeling paint of the façade is off-white, except where, on occasion, what is left is barn red.

The trick is that each barn in its way makes no sense, other than the sense of an ingenious creation — an independent reality of disparately sized and shaped windows, or a tilt this way or that, or a stepped-up series of roof lines, or the odd remnant of a roof atop another roof.

It makes sense that Clark, it turns out, is a writer whose work has appeared in Creative Nonfiction, and he is a designer whose work is recognized by awards. Same for the arts, with residencies and bibliographies and more awards. He is a graduate of the estimable Rhode Island School of Design.

Finally, five works display his journey into a non-illusionary third dimension — just to keep the hall of mirrors, the tricks of the eye, engaged. These are three rooftops — upside down, right-side up, and an errant orb study escaped from a variant of the ’60s geodesic domes — and not to forget a leaning silo suggestion of the leaner in Pisa.

It all looks at first glance like a one-note show. But once one starts recognizing its chords, it is clear the works’ hall of mirrors lead from a singular reflection revealing concept and then through the three dimensions of space and into a fourth. It just takes a lot of mirror echoes to get there.

Anthony Bannon was an art critic for the Buffalo News before crossing the line to the other side of the desk, becoming an arts administrator. He served as director at George Eastman House International Museum of Photography and Film in Rochester before it became George Eastman Museum, and then the Burchfield Penney Art Center at Buffalo State College, from which he retired last month.