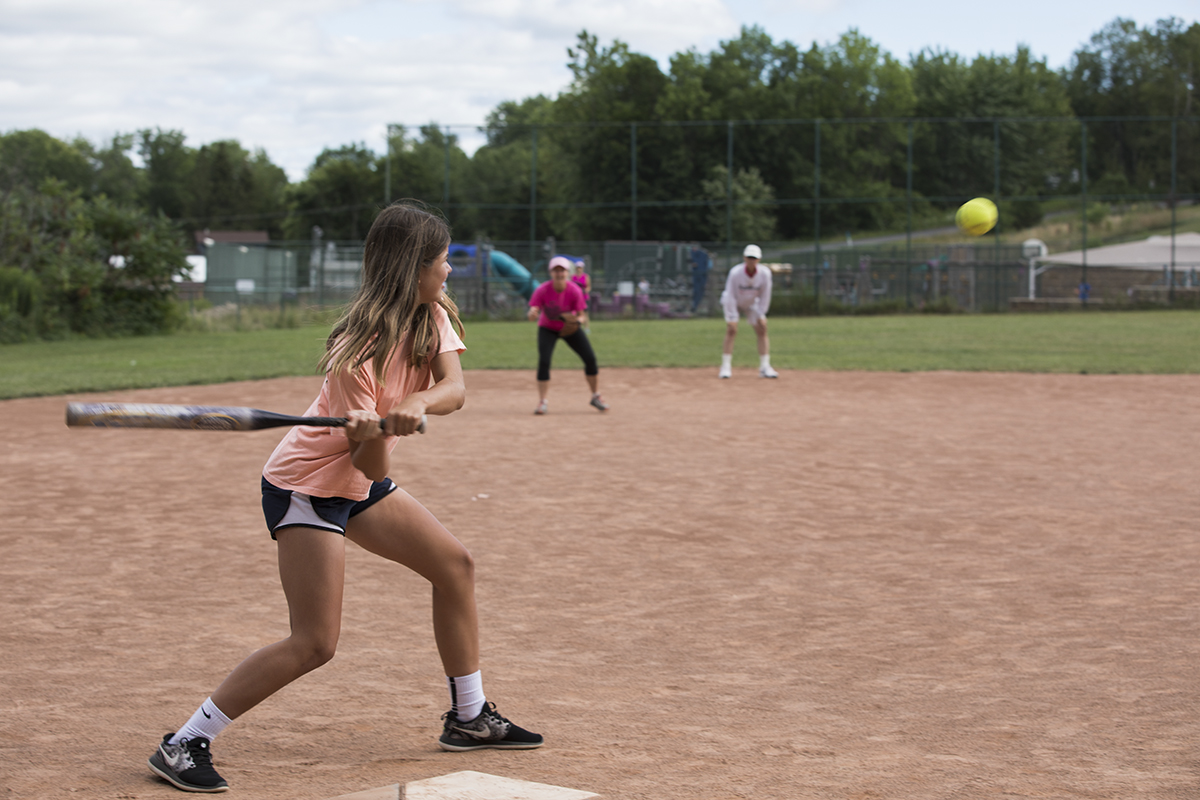 At 6:30 p.m. Thursday, Sharpe Field will play host to a title rematch between the Hot Chauts and Grilled Cheeselers, formerly known as the Misfits. But to get there, both teams had to take care of business in the first round of the playoffs.

The Belles took the lead early with four runs in the first inning. The Grilled Cheeselers only countered with one run.

Grilled Cheeselers captain Julia Koron 1 attributed this to a lack of focus at the beginning of the game.

“Our first inning is always our worst,” Koron said. “Once we get focused, we play well.”

Koron and company started to get focused in the second inning, scoring two runs. Down 4-3, in the third inning, the Grilled Cheeselers scored six unanswered runs to take a 9-4 lead.

Team captain Carrie Zachry said when the Belles, who haven’t won a game since 2015, finally taste victory, the whole team will jump into the lake to celebrate.

Zachry also credited the Grilled Cheeselers for their performance.

“They’re young and they can hit,” Zachry said. “Those girls are fast.”

Speed helped dictate the game, as the Grilled Cheeselers regularly went for extra bases and beat out many close calls at home.

Koron said that after last year, the team formerly known as the Misfits wanted a new identity.

“Last year there were two teams, but neither had enough players so we combined to become the Misfits,” Koron said. “This year, we had a solid team so we didn’t think of ourselves as misfits.”

Koron said the Grilled Cheeselers was just a fun and unique name. Each player is known as a different flavor of cheese depending on their personality and eating habits.

To prepare for the championship game, the team will make shirts and grate cheese as a new ritual for a new team.

From there, the Moms scored a run in each inning, but it wasn’t enough to keep pace with the Hot Chauts. In the fifth inning, down 23-2, the Moms had an option to take the mercy rule and stop the game. But Chubb, the team captain, didn’t want to throw in the towel.

“Maybe we’ll have that last inning rally where we can get some runs,” Chubb said. “We knew it was going to be our last game of the season, so we might as well play it out with friends.”

“I was all for it,” Tarr said. “Our season is so short anyways, why not play it out to the end.”

The Moms continued to battle, scoring four more runs. However, the Hot Chauts put up 10 more runs to take the win 33-6.

The Moms were visibly disappointed, but joked about the blowout during the last two innings. Despite losing by a wide-margin, they played it out. Softball brings them together, no matter where they all end up

“It’s more than just a sport,” Chubb said. “This is our only time we all get to be together. It’s catching up with each other on the field.”

During the game, the Hot Chauts continued to improve their players, coaching teammates on batting and fielding when they performed poorly.

Even though they had a commanding lead, the Hot Chauts wanted to make sure they were primed for the championship.

Tarr knows what to expect from the Grilled Cheeselers, and said her team’s prepared for their speed and aggressiveness.

“They’re a competitive team,” Tarr said. “We beat them in the championship last year, so hopefully we can pull it off again this year.”

Zachry, also the women’s league commissioner, thinks anything can happen in the game.

But no matter who wins tonight, Zachry said the league will celebrate together to commemorate another successful season.

“I think that’s the spirit of the league,” Zachry said. “We want to enjoy time together and each other’s company.”

Rabbi Joseph Telushkin to discuss the history of humor in Judaism