Humanist chaplain Bart Campolo expresses message: “You can do friendship” 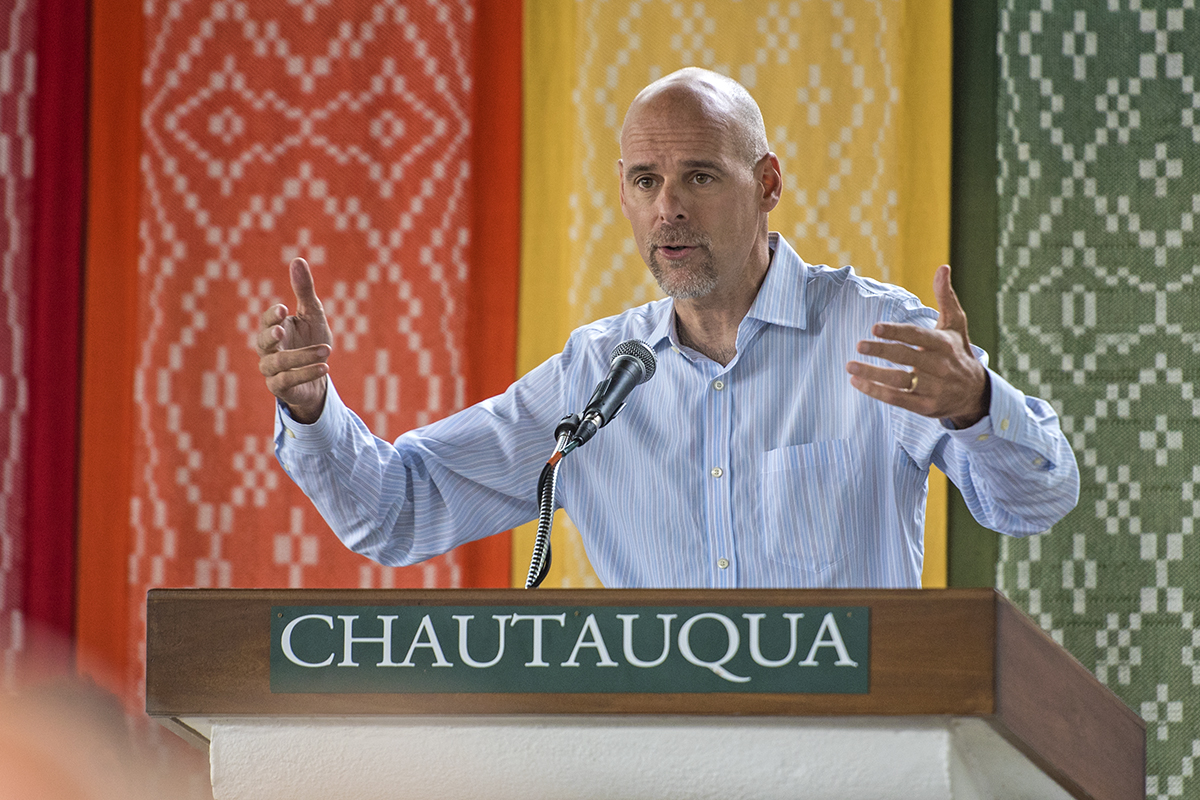 Bart Campolo delivers his lecture “Cultivating Friendship and Community in an Age of Anxiety” on Friday, Aug. 4 in the Hall of Philosophy. OLIVIA SUN / STAFF PHOTOGRAPHER

Bart Campolo is not fond of the title of the book he co-wrote with his father — Why I Left, Why I Stayed: Conversations on Christianity Between an Evangelical Father and His Humanist Son.

“What he should’ve titled it was ‘How I Managed not To Alienate My Evangelical Father After I Left,’ and my dad’s part should have been ‘How I Stayed Close to My Humanist Son Even Though He Broke My Heart and Embarrassed Me,’ ” he said.

It’s not that Campolo, humanist chaplain at the University of Southern California, thought his parents were “phonies” for their faith. His father is evangelical activist Tony Campolo, and Campolo knew he was sincere in his preaching. Bart Campolo was never a “rebellious minister’s kid” either, raised in the Christian faith only to turn against it to prove a point.

“The problem for me as a young person was: I didn’t believe in God, and it’s hard to be a Christian when you don’t believe in God,” Bart Campolo said. “It’s one of those basic theological obstacles that is very difficult to overcome.”

Campolo didn’t embrace Christianity because of his parents’ requests. Instead, it was through a boy on his soccer team, who invited Campolo to “the most unbelievably high-tech youth group” he could imagine, where every Thursday from then on he would be surrounded by “300 high school kids who loved each other.”

One weekend, on a youth retreat in the mountains, Campolo said he heard from God. It was nighttime, and everyone in attendance was singing “I love you, God” by candlelight. Despite the fact he had been “faking it until he made it” to that point, Campolo had a “transcendent experience.”

“There are these things that happen to us in our lives where we have moments in which we become aware that we’re part of something much bigger than ourselves,” he said, “that there’s something going on above and beyond what we can explain.”

Soon after, Campolo was taking his youth pastor’s charge to find the “lost and lonely” at his high school, to befriend them, to help them find “purpose, meaning and identity” as part of the evangelist “army of goodness.”

As for the doctrine, Campolo didn’t know if he fully bought in.

“The dogma of Christianity, all those teachings … that was not the attraction of Christianity for me, that was the price of admission,” he said. “Believing that stuff was hard.”

He would do anything to get in — including professing to have “faith in that which is unseen.” This, he said, is why he makes a great humanist chaplain. At USC, students are “desperate for the kind of community” a united religious body brings. In fact, every psychological study Campolo has read on joy says the emotion comes from investment in a “handful of loving relationships.”

“I used to think that happy people were grateful, but when I read the science, I found out that it’s actually not the way … the truth is that grateful people are happy,” he said. “The act of reflecting on your lessons actually makes you enjoy them more.”

The humanist chaplaincy at USC, founded in 2014, hosts activities similar to a Christian group — mission trips, games, songs. If someone came to visit, he said, “it would look like every youth group on planet Earth.”

“It’s the same-old, same-old,” Campolo said. “The only difference is that these kids are pursuing goodness in a secular way — just because it makes sense to them, just because they’re convinced it’s the best way of life.”

“The problem for me as a young person was: I didn’t believe in God, and it’s hard to be a Christian when you don’t believe in God,” Campolo said. “It’s one of those basic theological obstacles that is very difficult to overcome.”

Many of the students he spends time with did not grow up in a youth group, so they’re under the impression he “invented fellowship.” Once, when Campolo delivered a 10-minute talk to the group, someone asked if it was a sermon.

Campolo is equally fond of speaking to a larger crowd as he is getting coffee with an audience of one. One afternoon he met with a student named Jordan who had it all together on paper — member of a fraternity, scholarship student, intern at NASA’s Jet Propulsion Laboratory and “stone handsome.” But there was something missing.

This is a common problem, Campolo said, in society today. Students know how to “write a term paper, fix your car or reprogram your computer,” but they are coming up short when it comes to being a good friend.

This picture millennials are painting shows them having “a thousand friends,” but no matter how many digital connections they make, they still live life alone.

And friendship, he said, is the basis of a healthy romantic relationship, parenthood, workplace dynamic or neighborship. The toxicity that results from the lack of a common understanding corrodes people’s trust.

So Campolo told Jordan, and the Hall of Philosophy audience, his crucial message: “You can do friendship.”

Jordan asked what, then, he needed to do. And when Campolo told him all they needed to do was set up weekly meetings, Jordan wondered if Campolo couldn’t just send him a YouTube link or article instead. Campolo simply gave him advice.

He asked audience members: If they wanted to take up archery, what would they do?

“You would get lessons, you would buy a book about archery, you would look at YouTube videos, you would go to an archery club and hang out with the other archers, you would ask people to help you, you would practice,” Campolo said.

So then, Campolo said, people need to practice friendship in the same way — because right now, we’re doing it all wrong.

Instead, he taught Jordan how to spot someone with good spirits, not just good stature. These lessons — how to listen, ask the right questions, make conversation, look people in the eye — helped Jordan express affection in an “intentional” way.

And Chautauquans, Campolo said, aren’t exempt from these lessons either.

“You people are the champions of intentionality in relationships,” he said. “This is why you come here for a week. You’re like, ‘Let’s go and get close to people and talk about meaningful stuff.’ ”

So when talking to others, especially children and grandchildren, Campolo said, people need to ask the right questions to get purposeful answers.

At the end of the school year, Campolo’s group hosted one last potluck dinner, and it was there that he saw Jordan smiling, laughing and surrounded by a handful of friends.

“I’m here to tell you that there’s only one lifeboat I know that really makes the difference when people go into the water,” Campolo said. “And that’s community.”