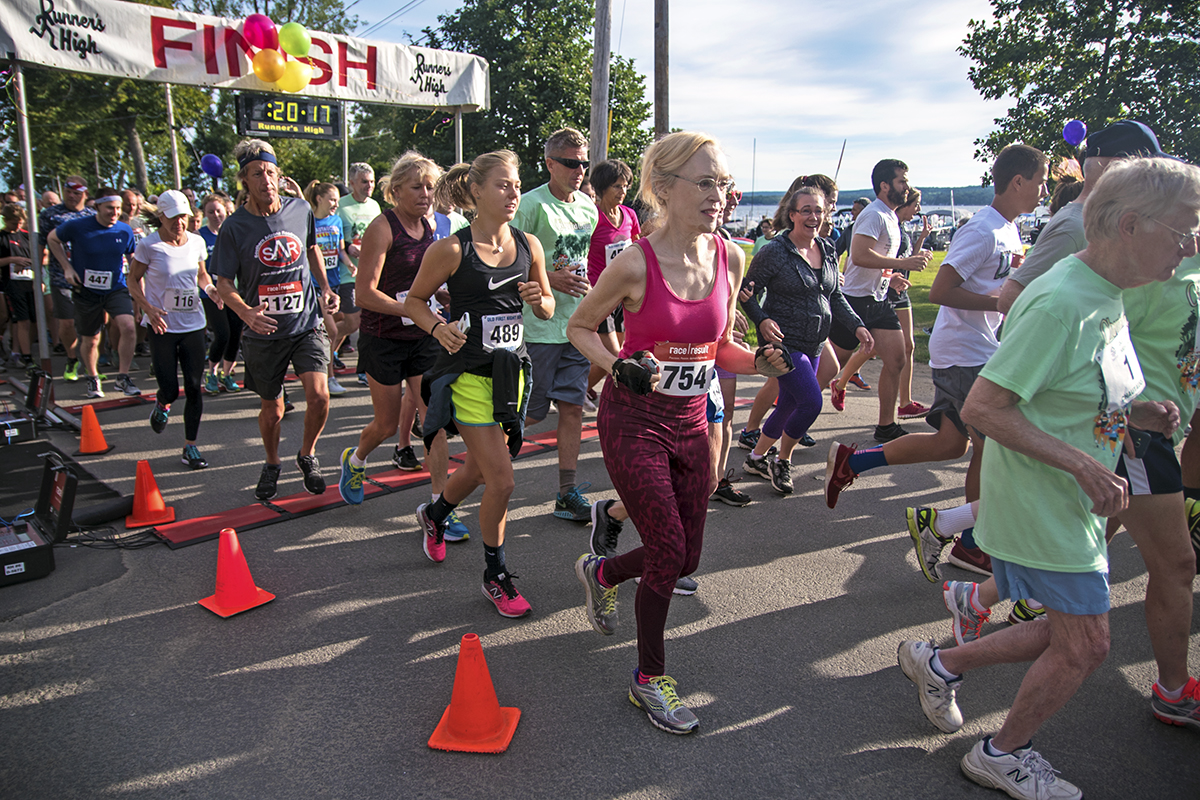 Runners and walkers begin the Old First Night Run/Walk on Saturday, July 29. The overall winner of the 2.7-mile race was John Ealy, from Mayville, New York, with a time of 15:06. OLIVIA SUN/STAFF PHOTOGRAPHER

Despite serving as the Sports Club director for the past two months, Deb Lyons knew the real test would come when she and her husband, Dana, finally tackled one of Chautauqua Institution’s most beloved traditions.

More than 700 runners and walkers flocked to the Sports Club to participate in the annual 2.7-mile race.

This year’s race was dedicated to former race coordinator Margaret “Peg” Ulasewicz, who died of cancer in May.

John Ealy, 32, won last time he ran the race in 2007. A decade later, he won again. Ealy, of Mayville, finished with a time of 15:06. Ealy said he decided to return to the race after getting back in shape.

“I just ran consistently every day,” Ealy said. “I’ll be back next year to defend my title.”

Alan Evans, 54, sporting some colorful rainbow shorts, came in second with a time of 15:31.

Evans, of Corning, said he didn’t plan on doing the race until his mom, Mary, signed him up.

Lindsay Sanger, 18, finished as the top female runner with a time of 17:30. Sanger, of Sinking Springs, Pennsylvania, didn’t have too much trouble with the course. She’s been running eight miles a day as part of her training.

“I do running for sport, so I might as well go for it,” Sanger said. “I wanted to win last year. It’s nice to finally accomplish my goal.”

Outside of top finishers, quirky stories and notable Chautauquans filled the event.

Back in December, Mike Minor, 38, noticed younger brother Paul, 36, was “flabby and out of shape.” Thinking he could jokingly “destroy Paul’s self-esteem,” he made a gentleman’s bet with Paul over who would finish with a better time in the race.

Both brothers from Chautauqua County finished top-three in their age group, but Paul ended up beating Mike by 17 seconds.

Paul credited his win to cutting back on soda and a desire to win after Mike beat him in last year’s race.

“I know what it feels like to lose,” Paul said. “I didn’t want that feeling again.”

New Institution President Michael E. Hill participated in his first Old First Night Run/Walk. Hill, a longtime runner and enthusiast of road races, praised the event for how well it brings people together.

“I love watching how much the community enjoys this,” Hill said. “This is one of those ways where you can come together for purely social and recreational purposes. I had fun and this won’t be my last time (participating).”

After all the runners and walkers came in, an assortment of cookies, bananas and refreshments awaited them as a “thank you” for participating in the event.

Around 9:30 a.m., awards were handed out to top finishers by gender, age group and overall finishers. By 10 a.m., participants went home and volunteers enjoyed a lunch spread in the back of the Sports Club, provided by Deb and Dana as thanks for helping out.

Dana said he was happy that he could get the event done quickly.

“There’s lots of things that people want to do in Chautauqua,” Dana said. “It’s a nice time to socialize afterward, but we wanted to keep the process moving.”

Dana said he couldn’t have done it without his loyal volunteers, many of whom stuck around after years of helping Peg and former Sports Club Director Richard “Uke” Ulasewicz.

“A lot of the volunteers were close to them, but they wanted to continue helping out as they’ve done in the past,” Dana said. “We certainly appreciate that.”

Deb credited Peg and Uke for building the race into what it is today.

“We are so grateful to Peg and Uke for laying the groundwork,” Deb said. “We’re just happy to continue this great race.”