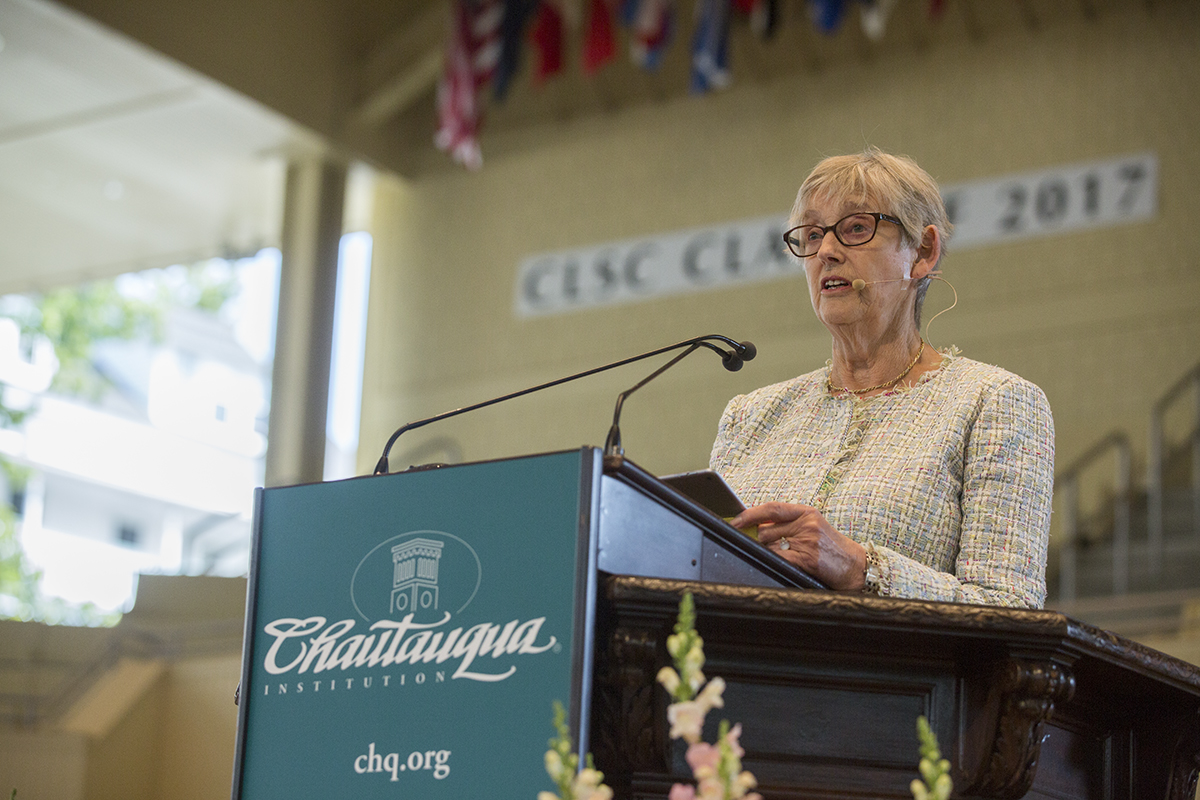 “The land of the stiff upper lip.”

“Keep calm and carry on.”

“They always grumble, but they never worry.”

Dame Stella Rimington had a lot of different ways of saying the same thing: The English aren’t afraid of a whole lot.

That’s not for lack of reasons, though.

“(The English) manage to be reasonably calm in the face of adversity,” said Rimington, speaking Wednesday morning in the Amphitheater as part of Week Seven, “The Nature of Fear.”

But, she continued, they’ve “certainly had some adversity to cope with.”

They’re not the only ones. As Rimington — a former director general of British intelligence service MI5 — trudged headlong into the political morass of what she labeled “global fear,” she would enumerate a series of international threats about which her audience might find cause for alarm.

Rimington has lived through her fair share of international crises; from the bombings of World War II to the Cold War’s threat of nuclear annihilation to the domestic terror of the Irish Republican Army, she’s had a front-row view of some of history’s most dangerous moments.

But today is different, she said.

“The world’s probably more difficult and dangerous than it’s been through all that period,” Rimington said. “And I think the reason is that in those days … we seemed to kind of understand what we were facing; we knew the parameters of it; we knew who the enemy was and we made our mind up (about) what we were going to do about it.”

Now? Not so much.

Case in point: the Middle East. Syria, Iraq and other “troubled areas” in the region face war, terrorism and complex questions of diversity and democracy. These crises will impact not just Middle Eastern countries, but ones in the West, too.

“One of the things that’s happened … in all this confusion is that it’s provided a place for terrorism, for violence (and for) a version of Islam that is extremely cruel, extremely violent, to flourish,” Rimington said. “And we are facing now probably one of the worst terrorist organizations that we’ve had to cope with in the form of (the) Islamic State.”

ISIS’s goal of establishing a caliphate will not be difficult, Rimington said; but their plan to use that as a launching point from which to “move out and rule the world” is impossible.

“You can laugh at that — obviously, I mean, it’s an ambition that’s never going to be achieved — but on the way, we are their enemy,” Rimington said. “And unfortunately, we can drive them out, we can move them on, we can kill as many as we can; but they have a way, still, of getting at us.”

And aided by new communications technologies, recruitment for terrorism both at home and abroad is easier than ever. Sitting in a bedroom, watching an internet video, can be enough.

Further, unlike the highly structured IRA (which an intelligence service like MI5 could infiltrate fairly easily), this decentralized, Wi-Fi-enabled terror campaign “should perhaps make us worry.”

North Korea, though, is really “the question that’s on everybody’s mind.”

“Yesterday, I might have given you a more cheerful message about North Korea because we all thought that although they had ballistic missiles, they did not have the technology to reduce their nuclear devices to a small-enough size to fit on (them),” Rimington said.

But that’s no longer the case, according to new American intel.

“The situation has moved on,” Rimington said, “almost overnight.”

Now that an “isolated, insecure young leader” — Kim Jong Un — has his hands on viable nuclear weapons, the clock has sped up on finding a solution to an issue that’s looking more and more like the Cuban missile crisis.

“We don’t know what’s going to happen here,” Rimington noted. This crisis is only exacerbated by President Donald Trump’s “fire and brimstone” threats and the hesitancy of China to get involved.

“I think Iran’s nuclear program probably has been stopped, temporarily,” Rimington said, “but I wouldn’t at all (be) surprised if it doesn’t start up again, gradually and slowly, under the radar.”

Their “fairly aggressive foreign policy,” combined with a desire to spread Shia Islam, adds to Rimington’s assessment of Iran as potentially worth fearing.

One of the things that’s happened … in all this confusion is that it’s provided a place for terrorism, for violence (and for) a version of Islam that is extremely cruel, extremely violent, to flourish,” Rimington said. “And we are facing now probably one of the worst terrorist organizations that we’ve had to cope with in the form of (the) Islamic State.”

Russia is another adversarial figure. From the Cold War on, the country has consistently presented problems for the United Kingdom, the United States and the rest of the West.

Though at the end of the Cold War Rimington tried to help the KGB (MI5’s Soviet counterpart) reform their practices for Russia’s transition to democracy, the agency ended up not following her advice.

“They had no intention of behaving in any way differently from the way they’d always behaved, and of course they haven’t,” Rimington said. “And now the KGB — in the form of Mr. Putin — runs the country, and things have gone back very close to where they were.”

Russia today is an aggressive player on the international stage, but in a more subtle mode than, say, North Korea. Rather, the Kremlin’s focus is on destabilizing and undermining the West, as with their suspected tampering in the 2016 U.S. presidential election.

This is “exactly the same sort of way that they behaved in the Cold War,” Rimington noted.

And though “the Russians were probably rather disappointed in Trump so far … what they won’t be disappointed in is the fact that there is a form of chaos in Washington (D.C.).”

“Political confusion, of course, weighs in their favor,” Rimington said.

Aside from specific regions and countries, though, she also identified certain geopolitical trends with which she takes issue.

The first is nationalist populism, wherein countries, often amid widespread poverty, elect leaders who provide simple answers to complex issues and frame themselves as fighting against elites.

Rimington knows this all too well.

“Our Brexit referendum, I think, was largely lost … because of the influence of a populist, a man called Nigel Farage, who told the nation that if we left Europe, everything was going to be much, much better,” Rimington said.

Things are “turning out to be completely different from what (Farage) promised,” and the resulting weakening of Europe furthers Russia’s aims, she added.

Another issue is climate change.

“I do believe, strongly, myself, that global warming is underway,” Rimington said, “and that it’s probably irreversible.”

Even aside from the ecological catastrophe such a change will cause, myriad geopolitical crises will also emerge in its wake: mass refugee movements, shortages of food and potable water, and disease outbreaks, to name a few.

“I’m hoping that it’s not set on an irreversible course, and it’s certainly nothing that any of us here are going to see because it’s going to take generations for the results to be achieved,” Rimington said. “But it is alarming, and I feel worried that there are those in power who are denying that it actually exists.”

The last “grouse” she called out was with regard to social media.

“If our intelligence services are going to manage to get a grip of the terrorism, and even of Russia … we should be able, better, to monitor what’s going on on social media,” Rimington explained.

Although MI5 used to discover threats by steaming open private letters and intercepting phone calls, new technologies have caused a phase shift in how such malicious communication is done.

It’s a shift with which intelligence agencies haven’t yet caught up.

“If the law which governs our intelligence services doesn’t keep up to date with the changes in the digital communications world,” she said, “then we are going to be in a lot of trouble.”

But the implied expansion of state surveillance brings into question the balance between national security and individual privacy.

“Most people will realize that the government’s powers need to move more into affecting our civil liberties,” Rimington predicted.

“Social media seems, to me, to allow an opportunity for the worst in our society to spew out all kinds of horror and hate under the cover of anonymity,” Rimington said.

If this dynamic isn’t changed, she elaborated, it will “corrode our norms of our society.”

So, Rimington summarized, that is her “anxiety for the future.” Had she left the audience sufficiently despondent?

And had she given them any hope?

“No,” seemed to be the general consensus.

Perhaps seeking to lighten spirits, then, Rimington ended on an appeal for political leaders — Trump in particular — to not denigrate intelligence agencies.

“If we don’t allow our intelligence services to do what they have to do, if we don’t provide them with the resources that they need, and if we don’t at least give them the credit that what they’re telling us is honest … (we will) have no source of reliable inside information to help guide our politicians,” she said.