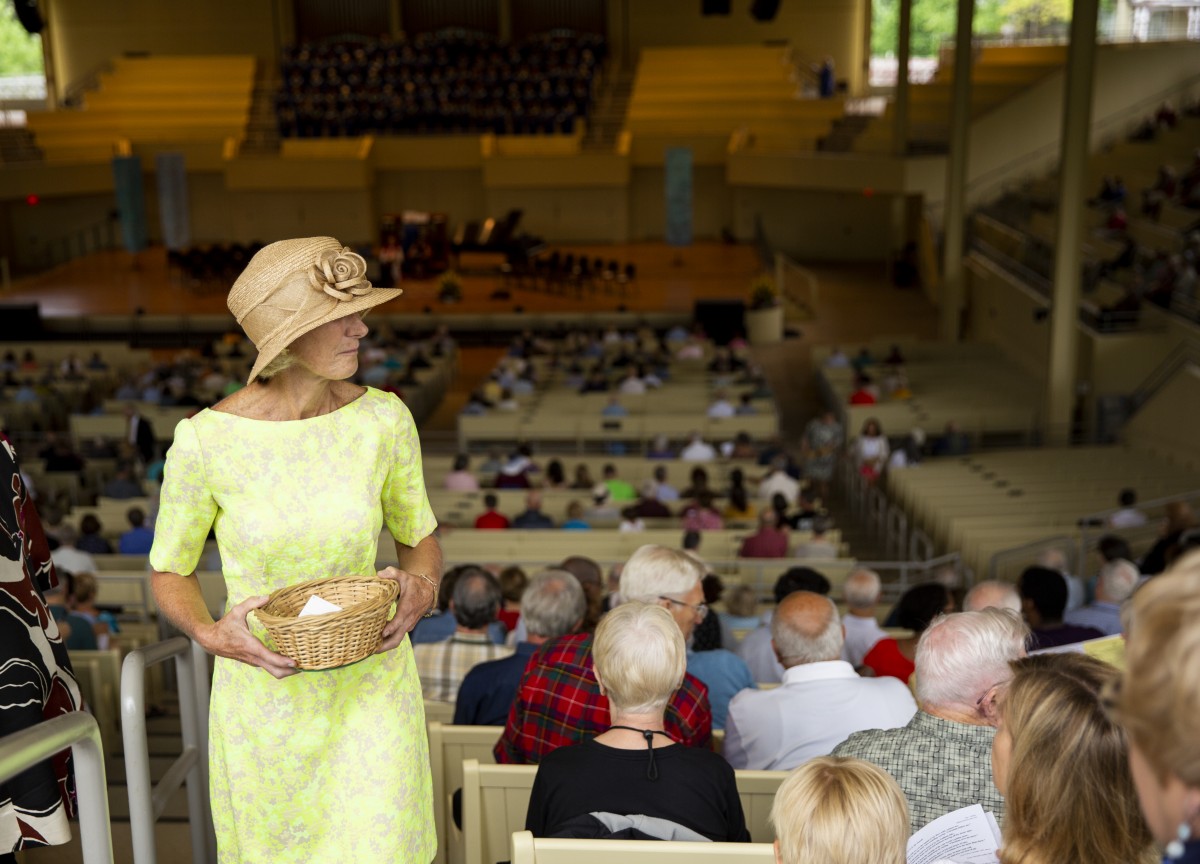 What do you do in the moment when your deepest shame is revealed, asked the Rev. Karoline M. Lewis during the 9:15 a.m. Wednesday, June 27 morning worship in the Amphitheater. Her sermon title was “Belonging,” and her text was John 4:16-24.

Lewis continued her series of sermons on Jesus’ encounter with the Samaritan woman at Jacob’s Well.

Jesus told the woman to go and call her husband.

“It was one of those questions that gets you in the pit of the stomach, that feels like a punch in the gut,” Lewis said. “Someone wants to learn your darkest secrets and see deep down inside where your self-blame resides.”

What do you do in those moments? You can feign ignorance, Lewis said — “Gee, I don’t know what you are talking about. Could you repeat the question?”

Or you can pretend you did not hear — “How was your Passover, Jesus? Mine was pretty good.”

Or you can tell the truth because “it is less painful than to perpetuate lies.”

So the woman tells Jesus, “I have no husband.”

“The amount of red ink spilled on this part of the story to try to re-incarcerate this woman in her shame and guilt would fill all the volumes in the Smith Memorial Library,” Lewis said.

It is time to mop up and plug up that red ink, she said, “and name the sexism that is still in control of the interpretation of Scripture.”

“It is time to get rid of the misogyny that has silenced her,” Lewis said of the Samaritan woman.

In the first century in Palestine, a woman had no control over her marital status, Lewis said, providing a history lesson for the congregation. The first reaction to the Samaritan woman’s statement that she had five husbands is usually: “Wow, what a woman. She is a tramp, a five-time loser.”

Why did she have five husbands, Lewis asked.

“They died or they divorced her. She did not have the right to file for divorce or to wait to fall in love,” Lewis said. “She married for survival, and she was at the mercy of the laws about widows and whether a man would take a chance on her.”

The law, found in Deuteronomy 25, was that if a man died and had no heirs, his brother was obligated to bring his dead brother’s wife into his home.

“The man she is living with is not someone she is shacking up with; they are not living together to see if it will work out,” Lewis said. “There is no waiting to see if she puts the cap back on the toothpaste or if he puts the toilet paper roll on the right way. He had to take her in.”

Imagining herself in that situation, Lewis said she “would not last one day living with her husband’s brother.”

If the Samaritan woman was divorced, it could be for any reason her husband wanted. The reason Jesus got so mad about divorce, Lewis said, was because the prime justification a husband used was that his wife was barren and could not give him an heir.

“When Jesus tells the Samaritan woman to call her husband, he knows her deepest pain, the truth of her life,” Lewis said. “He does not forgive her because she had not done anything wrong. He does not shame her but tells her the truth, that she has been unable to fulfill her role, to bear children, so no one wants her.”

This story is set at Jacob’s Well, a place where betrothals took place. Jesus did not go to Jacob’s Well to find a wife. He went to find a witness, to offer her the relationship she never had, Lewis said.

Jesus was saying to her: “I believe you; I won’t abandon, discard or forsake you. You will have life abundantly.”

The Samaritan woman gets it, Lewis said. She understands and says, “Sir, I see you are a prophet.”

“The woman sees something new about Jesus,” Lewis said.

First, she saw him as a thirsty Jew with bad manners, then she saw that Jesus had something she needed, then that he was a prophet.

“What will she see tomorrow?” Lewis said.

Because the Samaritan woman sees that Jesus is a prophet, she asks him a question. She wants to know the truth about God — where is God? In the temple on Mount Gerizim or the temple in Jerusalem?

“If you are a prophet,” the woman says, “then you know where God is.”

“Not in the temple on this mountain or in Jerusalem,” Jesus answered her. “God is right in front of you.”

Lewis said Jesus went to Sychar to find the Samaritan woman, to reveal himself to her and to give her a sense of belonging she had never experienced.

“She had never been truly seen,” Lewis said. “Irish poet and philosopher John O’Donohue said that the ‘deepest longing of the human soul is to be seen.’”

It is belonging that changes who you are, Lewis said. The Samaritan woman went from being useless to being a witness, from an outcast to a disciple, from abandoned and discarded to always and abundantly loved.

“I wonder what she will see tomorrow?” Lewis said.

The Rev. Tara Lamont Eastman presided. Bob Douds, who is beginning his 10th summer as co-host at the United Methodist House with his wife, Karen, read the Scripture. Jared Jacobsen, organist and coordinator of worship and sacred music, led the Motet Choir in “The Earth Adorned” by Waldemar Åhlén. Violet Cenedella, Cate Hackett and Mary Ellen Kimble were the soloists. The Jackson-Carnahan Memorial Chaplaincy provides support for this week’s services.