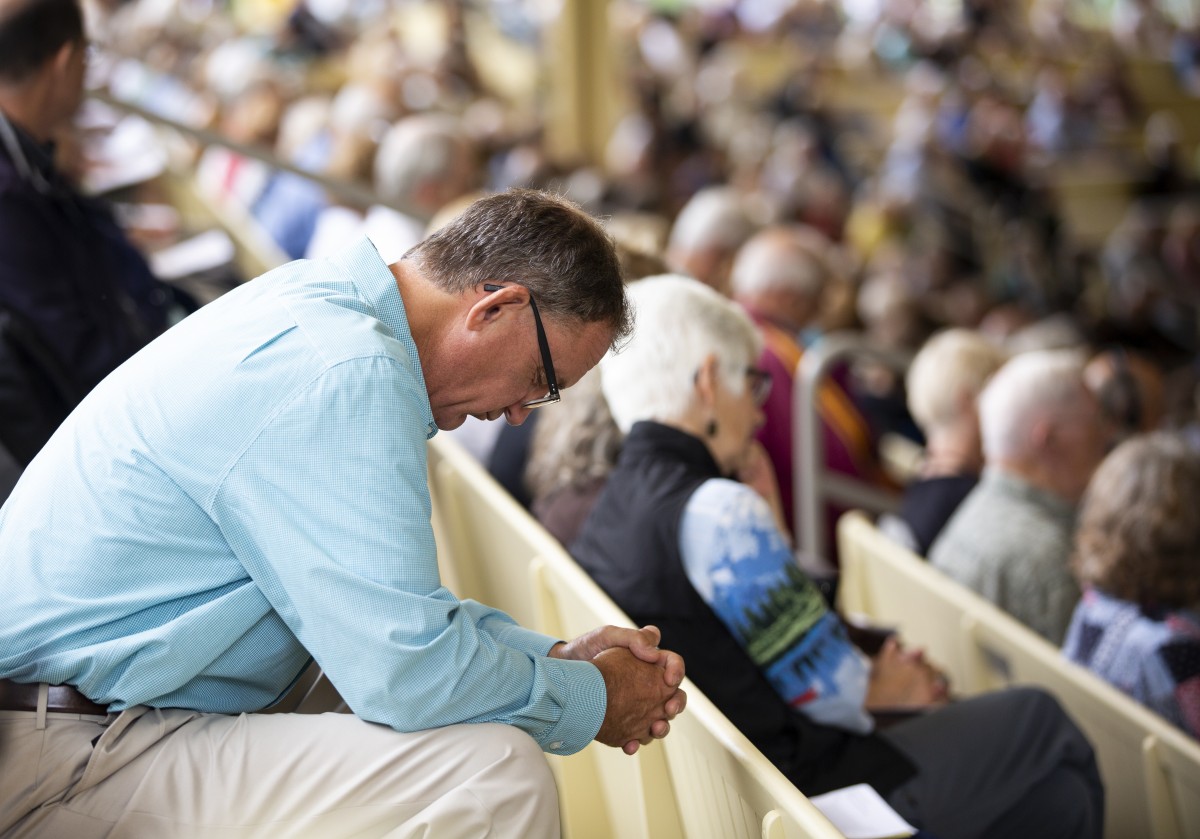 “What will the woman see (in Jesus) today?” said the Rev. Karoline M. Lewis at the 9:15 Thursday, June 28 morning worship service in the Amphitheater.  Her sermon title was “Leaving Your Water Jar,” and her Scripture text was John 4:25-30.

“I think this is the original ‘mic drop moment,’” Lewis said.

The Samaritan woman had experienced Jesus as a “thirsty Jew with no manners,” as someone who had something she needed, and finally as a prophet.

Now the woman mentions the coming of the Messiah, a belief shared by Jews and Samaritans.

Lewis said if the congregation were in her seminary class, she would ask them to take a pen, “or a pencil if you can’t stand to cross out anything in the Bible,” and cross out the word “he.” That pronoun is not in the Greek text.

“Jesus’ response is ‘I am.’ Any bells ringing; any light bulbs popping overhead? The burning bush, right,” Lewis said. “When Moses asked God who he should tell Pharaoh sent him, God told Moses to say, ‘I am sent me.’ God is right here, right now, not on this mountain or in Jerusalem.”

Guess who gets the first “I am” in John’s Gospel? It was not the Pharisees or the leaders of the temple or even the disciples, Lewis said.

“It is her, this woman with no name, because she is the world God loves,” Lewis said.

The Samaritan woman is the first person to whom Jesus reveals who he truly is, Lewis said.

When God shows up, what do you do, Lewis asked.

“You can sit there, or say ‘Wow, thanks, want another drink of water?’ Or do as the Samaritan woman did — shared her own experience,” she said.

The woman told her neighbors that Jesus told her everything she had done and invited them to come and see for themselves.

“She let the neighbors decide for themselves. She doesn’t have all the answers,” Lewis said. “She says, in proper translation, ‘Surely this isn’t the Christ?’ ”

But before she went back to tell her neighbors who she had found, the neighbors who have adjudicated her truth, the woman had to leave her water jar behind. As oppressive as the water jar was, it was what she knew.

“Sometimes it seems easier to carry the burden than to live life free of its weight,” Lewis said.

Lewis bought a journal a few months ago called “Letting Go: A Journal.” She was not sure why she bought it.

“Maybe because I am letting go of the mother I used to have who is now in nursing care with Parkinson’s disease,” she said. “Maybe it was moving my dad into a new apartment and watch(ing) as he let go of things with meaning, like his first-grade autograph book. Or this fall I will drive my older son to Washington state to start college. He is so ready to go. Maybe I should just let go of journaling.”

The Samaritan woman leaves her wooden bucket at the side of the well. She is not that woman any longer; she has become the woman God sees she can be, Lewis said.

“In my journal, there is a quote from Ray Bradbury. ‘We are cups constantly and quietly being filled,’ ” she said. “The trick is how to tip ourselves over and let all the beautiful stuff out. You need to know what to leave behind so the beauty God sees in you can be seen by the world God loves.”

The Rev. Tara Lamont Eastman presided. Celia Thomason-Knighton, retired teacher, principal, superintendent and a resident adviser with the Chautauqua International Order of King’s’ Daughters and Sons, read the Scripture. The prelude was “Twelve Variations on ‘Ah Vous dirai-je, Maman’ (Twinkle, Twinkle Little Star)” by Wolfgang Amadeus Mozart, performed by Barbara Hois, flute, and Joseph Musser, piano. The Motet Choir, under the direction of Jared Jacobsen, organist and coordinator of worship and sacred music, sang “How Lovely Is Thy Dwelling Place” by Daniel Kallman. The Jackson-Carnahan Memorial Chaplaincy provides support for this week’s services.