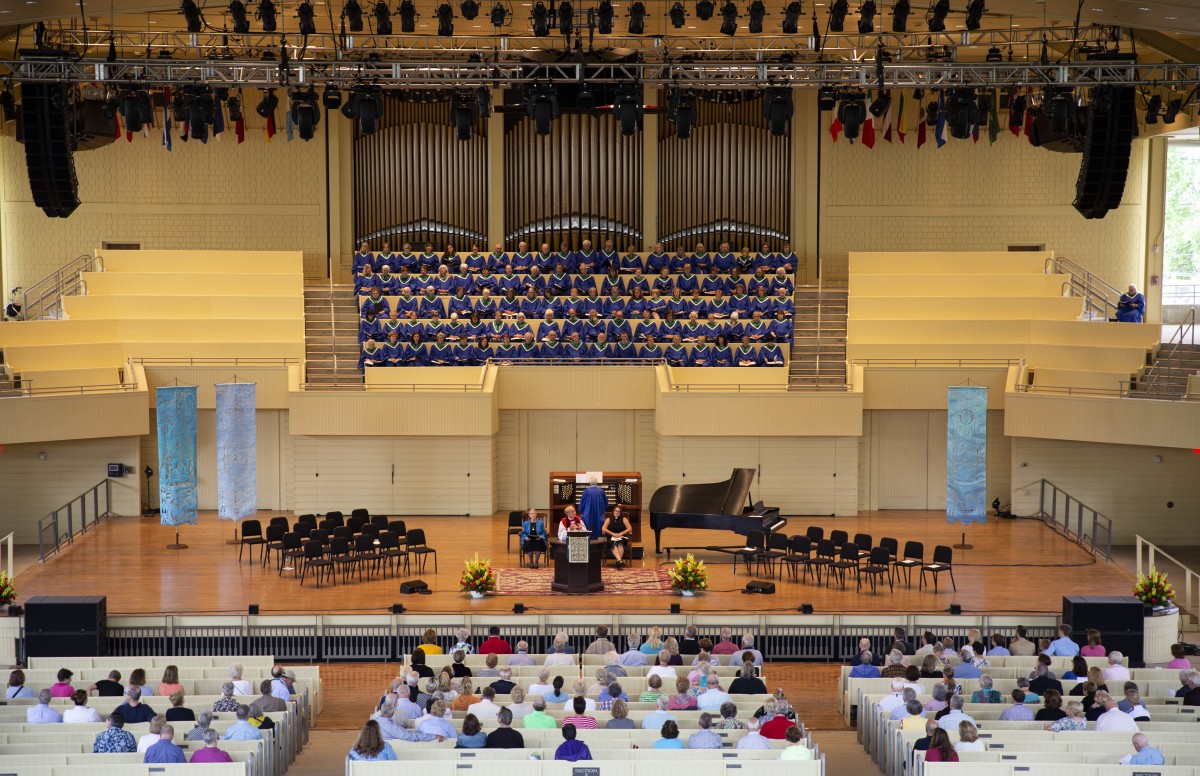 “We spend a lot of time and energy on salvation. We tend to postpone its grace to some future somewhere,” said the Rev. Karoline M. Lewis at the 9:15 a.m. Friday, June 29 morning worship service in the Amphitheater. Her final sermon title was “Salvation Today,” and her scripture text was John 4:31-42.

Salvation, she said, is thought of as “a get out of you-know-where free card.”

“We talk about who has been saved, who should have salvation and wonder ‘Do I have it?’ as if it is something that can be procured, a reward for a life well lived,” Lewis said.

She said we have turned salvation into a “religious competition.”

“Who has the best atonement theory?” Lewis said. “Have you found Jesus? Are you saved?”

Evangelism has become religion’s four-letter word. The word evangelism is not even in the Gospel of John, she said. “For John, it is not enough to tell about God’s love,” Lewis said. “We have to experience it. How can we experience it if we do not come and see?”

If salvation is just giving people some information about Jesus, why not just send out a video?

“How can we tell people about Jesus without inviting them into his presence?” Lewis said. “Witnessing to Jesus is not a dogma or a handed-out creed. It is an invitation to live saved here and now.”

When Mary Magdalene returned from the empty tomb in John Chapter 20, she did not tell the disciples, “Christ is risen. He is risen indeed. Alleluia!” She told the disciples, “I have seen the risen Lord.”

“Salvation is in the tasting, seeing, touching, smelling,” Lewis said. “That is what the disciples need to see and be.”

In John Chapter 4, the disciples return from Sychar and assume that Jesus must be hungry. Jesus’ response, Lewis said, leads to more understanding.

“In his well-practiced God voice, Jesus says, ‘I have food you don’t know about,’ ” Lewis said.

Jesus brought the disciples to Sychar for a reason: God so loved the world. Then Jesus pointed to his new disciple, the Samaritan woman.

“Friends, it is April, and you can’t wait until September for the harvest,” Lewis said, paraphrasing what Jesus told the disciples. “The world is ripe for harvest. Invite people to come and see.”

The people of Sychar stay with Jesus, but this was not just hanging out on a porch, Lewis said. They were abiding, a word used over 40 times in the Gospel of John.

In John 14:2, the Greek word for abide is often translated as mansions, “in my house are many mansions.” These houses are not mansions, “but abiding places that Jesus is preparing for us,” Lewis said.

At the end of John Chapter 4, it appears that the people of Sychar dismiss the witness of the Samaritan woman. They tell her that it is no longer because of what she said, but what they have heard for themselves, that they believe.

“They have to express their belief in Jesus for themselves,” Lewis said. “There is no such thing as a vicarious relationship. This is what ‘God so loved the world’ feels like. It is about the best definition of salvation you can find.”

What, Lewis asked, does abiding in Jesus look like? John 1:18 reads, “No one has ever seen God. It is God the only Son, who is close to the Father’s heart, who has made him known.”

The Greek text should be more properly translated as “bosom,” Lewis said.

“The Son is at the Father’s bosom,” Lewis said. “The only other time this word is used is in Chapter 13, about the beloved disciple. And if he was so beloved, why does he not appear until Chapter 13?”

“The beloved disciple is you. That’s where Jesus wants you to be,” she said, pointing to her bosom as if cradling a baby. “On the bosom of God, that is abiding.”

Lewis’ first son was born nine weeks early, and she went every day to the neonatal intensive care unit to see him. She was terrified to hold him because he was so little and had so many tubes and needles in him.

The NICU nurse told her that she would teach Lewis about kangaroo care. This method promotes skin-to-skin contact between the newborn and its parents.

“The more time (the baby) stays here,” Lewis said, pointing to her bosom, “the faster it gains the skills to eat on its own, maintain its body temperature and gain weight. A child can grow exponentially the more time it spends here.”

That is what God wants, Lewis said. Everything that we need for life abundant is at God’s bosom.

The Samaritans abided with Jesus and realized that he was the savior of the world.

“This is the moment on which salvation hinges in John,” Lewis said. “It is the only time in this gospel that the word savior is used.”

How can that be, because it is only Chapter 4? There is no arrest, no trial, no cross, no resurrection. As Lewis said, “The only miracle Jesus has done at this point is to turn water into wine.”

Salvation is supposed to come from the cross, as a resurrection to a future life. How can the Samaritans say that they came and saw and abided?

Lewis posed a final question for the week: “What will you do with this salvation today, that is here and now and not a life to wait for or anticipate?”

Will you go to Sychar? Will you ask for water? Will you tell your truth? Will you leave your jug behind? Will you come and see?

“How can God love the world without your witness in it?” Lewis said.

The Rev. Tara Lamont Eastman presided. Haley Quinton, a fiction writer originally from Paducah and currently living in Memphis, Tennessee, read the Scripture. The Motet Choir, under the direction of Jared Jacobsen, organist and coordinator of worship and sacred music, sang “Forever Music” by Mark Hayes. The Jackson-Carnahan Memorial Chaplaincy provided support for this week’s services.