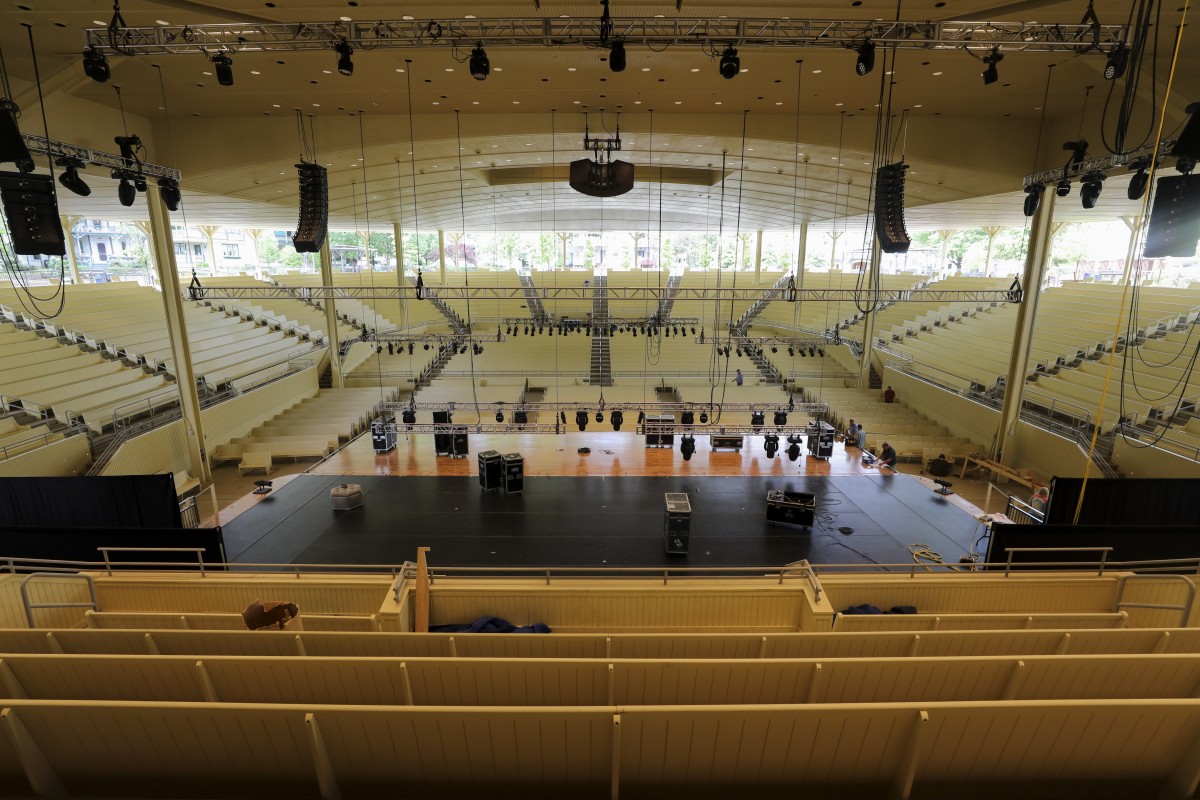 So, is the Amphitheater completely finished?

“Except for a few bits that we are taking care of in house, the answer is yes,” said John Shedd, vice president of campus planning and operations.

Shedd has been intimately involved in the Amp project’s development, from conception, to Promise Campaign centerpiece, to the venue at the heart of Chautauqua’s summer program.

This past off-season, general contractor L.P. Ciminelli of Buffalo completed the punch list of to-do items to officially complete the building.

Just a year ago, it was all-hands-on-deck as the Institution, Ciminelli and other contractors hustled to install seating in the new Amp in time for the start of the 2017 season. The crisis arose from the inability of the initial contractor to supply all the necessary benches in a timely fashion.

In the scramble that ensued, seating was installed from three sources. The original vendor Fancher Chair — a local firm out of Falconer, New York — manufactured most of last year’s benches, and the rest came from a recall of some of the original Amp benches from the contractor that had bought them for subsequent resale.

For this season, the problem is solved, but not without a few headaches.

“By the end of last year, Ciminelli had terminated the contract with our original contractor out of Nebraska,” Shedd said. “They had several problems with Ciminelli, and in the end we all moved on.”

A new contract was signed with Fancher Chair at the beginning of this year, and the company then made and installed all the benches in the Amp.

The new seating is constructed of sturdy poplar hardwood, perfect for withstanding the harsh weather that rolls in every winter.

Ciminelli’s project manager Ben Loeffert, said Fancher “didn’t chase the work in the early development of the project,” because the endeavor of both manufacture and installation was “outside of Fancher’s normal business zone.”

“The fact that Chautauqua is a local project for them probably helped convince Fancher to come in early this year and help us finish the seating,” he said. “Fancher’s outstanding results speak for themselves. This was really a win-win.”

Last season’s Amp benches were returned to the vendor or destroyed. The benches that were supplied by the original contractor did not hold up well, and many were falling apart by the end of last season, Shedd said. Fancher’s emergency replacements were never intended as permanent seating and were made of plywood. The few benches from the old Amp, used mostly in the choir loft last season, were returned. All seating this summer will be in Fancher hardwood poplar benches.

Financial issues regarding the original contractor are between that firm and Ciminelli and will be resolved by them, Shedd said. There will be no financial liability for the Institution.

Shedd said Chautauquans will notice a few other changes regarding the seating this season. Along the Amp upper rim, short benches have been added in for companion seating, next to the wheelchair-accessible spaces. Seating on the orchestra floor is now numbered, and there are cushions installed on those orchestra benches.

“The cushions are actually for acoustical reasons,” Shedd said.

One of the few issues to emerge in the new Amp last summer was sound in the venue. Acoustic consultant firm Jaffe Holden of New Jersey offered expert advice as last season progressed and remains available to the Institution as needed.

The orchestra seating cushions were installed to reduce sound reverberation for the orchestra.

To further diffuse sound in the immediate orchestra area, small acoustic panels have been installed on the north and south sides of the stage. At times, small curtains will be erected behind the orchestra to further fine-tune the sound.

Some audience members were concerned last year about the clarity of the spoken word in the Amp. In an effort to ameliorate this, front fill speakers have been installed at the front of the main stage, and some of the higher speaker clusters were retuned.

Finally, Jamestown Awning installed retractable curtains to the right and left of the Massey Memorial Organ chamber to reduce light intrusion from the lake during daytime audio-visual presentations.

Shedd said there are two categories of preferred seating this summer. “Preferred 2” seating will be like last summer: Reserved seating will be held for purchasers until the beginning of the program and then released on a space-available basis. A new “Preferred 1” seating program reserve the space for the purchaser during the entire performance.

The biggest change since last season at the Amp is outside the arena in the open area on the western side. Named Odland Plaza in honor of the philanthropic support of the project from Anne and Steve Odland, the open space is intended as gathering place, a venue for spontaneous pop-up arts performances and for other purposes the community imagines.

In place of the old gazebo is a similarly sized structure that has been informally named the “screen house,” an homage to the nickname for the old gazebo it replaced. It will offer generally the same merchandise and services as the gazebo, but it has been carefully constructed with features similar to those in the Amp. Shedd said Institution planners intend to invite a food truck to take up a position next to the screen house at times. Durable all-weather seats and benches may appear on the plaza as the season progresses to further enhance and define the space.

Tom Wolfe and a writer’s work