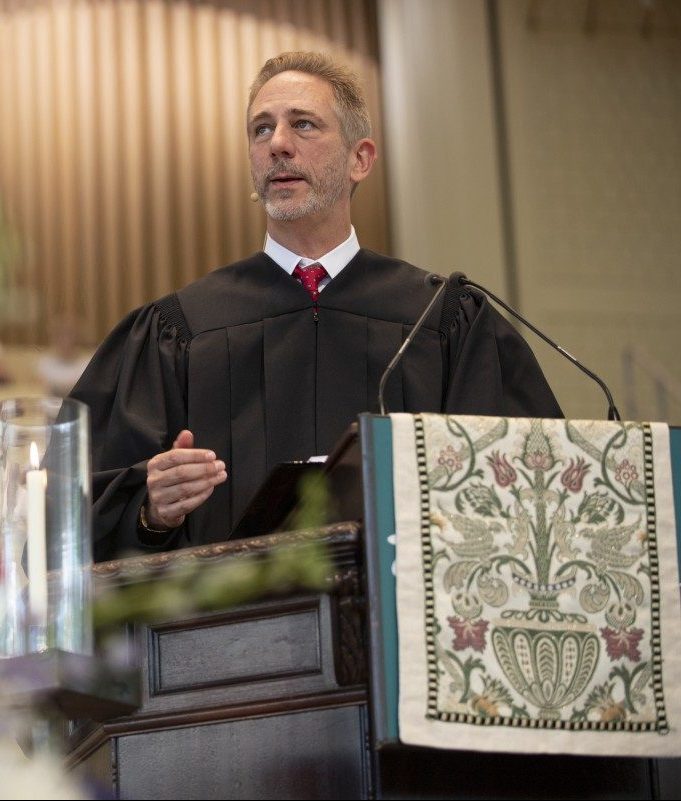 I titled my sermon ‘On Community,’ but I could have called it ‘On Living with People that You Know are Wrong,’ ” said the Rev. David P. Gushee at the 9:15 a.m. Friday morning, July 6, worship service in the Amphitheater. His Scripture text was Romans 14:7-13.

In America, we are having trouble living in community with one another, he said.

“We believe certain people are thinking wrongly, and they believe the same about us,” he said. “It is not just personally frustrating, but as a nation, it is ripping us apart.”

Had there been time, Gushee said he would have read all of the Book of Romans. The 14th chapter in Romans “is extraordinarily relevant for how to live in community with people who disagree over matters that all consider highly important,” he said.

The Roman world was highly diverse. There were people of many different ethnic and religious backgrounds, slave and free, citizen and noncitizen. It was no small feat “knitting people into a new community when the only thing they had in common was their newfound faith in Jesus Christ,” he said.

The apostle Paul can help us think about our conscientious differences that are creating problems today. In Romans Chapters 5 and 6, Paul wrote to the Christian community about problems they were having over what holidays to observe and food to prepare.

“It may not seem like a big deal, but think about trying to schedule holidays for a highly diverse urban school,” Gushee said. “Whose holidays do you follow? If you honor everyone’s holidays, the kids would never be in school.”

Have you tried to plan a meal for a diverse group of people, he asked.

“The menu these days is an art,” he said.

The Roman Christian community was wondering which holidays to honor and which food was all right to eat.

The more strict community members chose to not eat meat sacrificed to idols. Some kept kosher and honored the traditional Jewish Sabbath.

Others chose to enjoy the freedom they found in Christ and did not worry about eating meat sacrificed to idols. Those people did not believe the idols were real and did not keep kosher or observe the Jewish holidays because most were Gentiles. Those who had been Jewish thought the law no longer applied.

The strict community members believed they were stronger in their faith, creating a layer of pride that added to the division in the community.

“In Romans 14-15, Paul tells them that, in the church, there are some issues that are matters of opinion, and they should stop quarrelling about those,” Gushee said.

Paul told both sides to stop despising each other and think of each other as living honorably before God as they understood God. The ultimate judgement would come from God, and it was not yet at hand. Someone would make that judgement, and it would be God.

Paul asked the less strict group to accommodate the more strict group and to pursue peace and mutual upbuilding. The highest need, Gushee said, “was the spiritual well-being of everyone, and to prevent the community from being torn apart.”

The letter to the Romans was written over 2,000 years ago, Gushee said, and Paul was not known for his tolerance. But he saw a pastoral opportunity to address the young Christian congregation.

Paul’s message was, in brief, “human beings disagree for all kinds of reasons, we just do. And we judge people for thinking differently than we do,” Gushee said.

Self-confidence and pride are built into our judgements, he said.

“We are clearly right, they are clearly wrong. Human beings elevate disputes especially when religion is involved,” Gushee said. “We judge, we argue, we break community with each other, sometimes we suppress speech if we don’t like it, and sometimes it ends in violence.”

Paul, Gushee said, told the Romans that there were “zones of conviction” that can be seen as matters of opinion. People might come to different conclusions over those matters, but they need to live with each other.

“The theological reason for this is that each side must believe that the others are doing their best before God,” he said.

Everyone is answerable to God, and judgements should be based on humility before God.

“There is only one God, and we are not it,” Gushee said.

Gushee told the congregation that we have to maintain relationships with people when we disagree. We have to remain in community or in family life and respect others’ freedom to believe what they believe.

Gushee said the Framers of the Constitution reached a conclusion similar to Paul’s in the First Amendment: people deserve, in good conscience, to believe what they believe.

However, this is not lazily saying that one set of beliefs is as good an another, that there is no such thing as truth, Gushee said.

“They did not want the state to decide,” Gushee said of the Framers. “They wanted a zone of freedom that protected those of faith and those of no faith.”

The United States is broken into tribes of competing convictions, Gushee said.

“We have gasps of mutual incomprehension followed by judging and rejecting. See Facebook, or every night on TV,” he said.

People end relationships when the differences become too hard to bear. This is an escape valve so people don’t get hurt.

“There are over 300 million of us,” Gushee said. “Half of us disapprove of each other, and we are not going to leave.”

In such times, we would do well to remember Romans 14.

“Differences of conviction are inevitable,” Gushee said. “We have no direct access to ultimate truth. There is value in staying in community. We have one God we are accountable to, and we are not that person.

“Perhaps Paul has a word for us today in our nation’s history.”

Alison LoPrete presided. Vicki Carter, director of the Chautauqua scholarship program sponsored by the International Order of King’s Daughters and Sons, read the Scripture. The Motet Choir, under the direction of Jared Jacobsen, organist and coordinator of worship and sacred music, sang “Psalm 133” in a setting by Richard Proulx. The Edmond E. Robb-Walter C. Shaw Fund and the J. Everett Hall Memorial Chaplaincy provided support for this week’s services.