At all levels of government in 2018, women have been running in unprecedented numbers for elected office — nearly 600 for Congress and governorships alone. 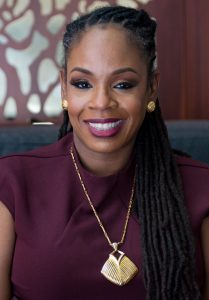 At 2 p.m. on Saturday, July 28, in CARR the Hall of Philosophy, political strategist and advocate Glynda C. Carr will present the final Barbara Vackar Lecture for the Chautauqua Women’s Club, “When Women Lead: From Seneca Falls to Washington, D.C.” She will talk about “many women (who) have contributed to the diverse pattern of our democracy,” including U.S. Rep. Shirley Chisholm, who was born in Brooklyn and lived in the Buffalo area after she left Congress.

In 2015, Chautauqua Foundation Board of Directors Chair Cathy Bonner established the annual Barbara Vackar Lecture as part of the CWC’s Contemporary Issues Forum.

Carr is co-founder of Higher Heights for America, a national organization focused on strengthening the civic participation of black women in grassroots advocacy campaigns and the electoral process. Higher Heights seeks to create an environment in which more black women and other candidates committed to advancing progressive policies that improve the well-being of black women can successfully run for public office.

“Women have played a major role in building our democracy, yet are underrepresented in elected office,” Carr said. “In 2018, we have a record number of women and women of color running for public office, stepping off the sidelines ready to serve and lead.”

However, political advocacy and organizing were not on Carr’s mind when she was growing up in the Hartford, Connecticut, area. She said that her father is fourth-generation Jamaican and her mother is African-American. Ethnic culture was important to both of her parents, and they were involved in local cultural organizations.

“As a little girl, I thought I was going to work in fashion, but I came from a musical family,” Carr said.

She was the youngest of three, and her brother was a full-time musician. She spent her Saturday at Jackie McLean’s Artists Collective, and she picked up the flute in fourth grade.

Jackie McLean — renowned alto saxophonist, composer, community activist and University of Hartford faculty member — and his wife, Dollie, co-founded the nationally recognized multidisciplinary Artists Collective in 1970 to preserve and perpetuate the artistic and cultural contributions of the African diaspora.

“My senior year, I thought I was off to New York to work in fashion,” Carr said. “Then I got a letter from the University of Hartford, where Jackie McLean was chair of the music program.”

McLean had established the university’s African-American music department, as well as its jazz studies degree program. Carr said she applied and was accepted with a scholarship. Midway through college, however, she decided she didn’t want to be a musician, so she dual-majored in jazz studies and arts management.

While her family was deeply rooted in music and culture, Carr said they were also committed to public service.

“When I turned 18, my mother drove me to city hall to register to vote,” Carr said.

At the University of Hartford, she was engaged in student activism groups, including as vice president of Brothers and Sisters United. BSU is the university’s oldest recognized student organization, according to the university’s website. In addition to their involvement in campus life and collaboration with other campus organizations, BSU’s members perform community service projects throughout the greater Hartford community.

Carr was in college when the verdict was announced for the Rodney King case. Four Los Angeles police officers were acquitted on charges of using excessive force while beating King when they arrested him on March 3, 1991. A videotape of this beating was provided to a local TV station. The acquittals sparked the 1992 Los Angeles riots and the prosecution of these officers in a separate federal civil rights case. Carr said she became involved in black advocacy thereafter.

“Like any small town girl,” Carr said, she wanted to move to a bigger city. So upon graduation, she worked in Philadelphia for three years for Big Brothers Big Sisters of America. As senior manager of social marketing and volunteer recruitment, her job was to travel across the country recruiting more big brothers and big sisters of color.

As a musician, Carr said she always wanted to move to New York. Her wish came true when she was hired as the director of national programs for the Thurgood Marshall College Fund, the largest organization in the United States exclusively representing the publicly supported historically black colleges and universities (which enroll more than 80 percent of all students attending such schools, according to the U.S. Department of Education) and predominantly black institutions.

In 2002, when Kevin Parker ran for the New York State Senate — seeking to represent District 21 in Brooklyn, where Carr lived — she said she was inspired by him. She began volunteering for his campaign and ended up as a “super volunteer.”

Carr said that after Parker won the race, “he approached me to be chief of staff because of my background in community organizing.” She accepted. Until 2008, Carr traveled on Parker’s behalf, organized his local initiatives, shaped policy concerning youth development and economic development, and served as the manager for two of his successful re-election campaigns. Currently, Parker is the legislature’s Democratic Conference Whip.

“Then I got a call from a colleague about a new organization, Education Voters of New York,” Carr said. “That’s where I met Beth Sullivan,” the current president of the CWC. “I was her New York state executive director.”

Sullivan had founded the nonprofit Education Voices of America in 2006 to advocate for equitable rather than equal educational funding. Because education-related decisions are largely made and implemented at the state level, Sullivan launched organizations in five states, including New York.

Carr spoke about Education Voters of New York in an interview for GlobalPolicy TV in 2011.

“(It) is an advocacy organization that looks at public school reform from a political perspective,” she said. It’s about development of the right policies so that every child, particularly children from low-income (families) and communities of color, have access to a quality education. It’s about … engaging communities and mobilizing around that issue, but more importantly, supporting and electing pro-education candidates to our state offices around the United States.”

For nearly three years — until after the 2010 election when the political environment changed in Congress and across the country — Carr worked for Education Voters of New York. As the organization shifted its focus, she thought hard about what she wanted to do.

“I’ve always had a ‘kitchen cabinet’ — informal advisors, mentors, and sponsors like (President) Andrew Jackson had,” Carr said. “So I spent … time with women, having conversations with my kitchen cabinet and friends.”

Carr said there was a particularly productive conversation with political fundraiser and event planner Kimberly Peeler-Allen, then principal of Peeler-Allen Consulting.

“I was talking to Kimberly about opportunities (in 2011) — my background is music and civic engagement,” Carr said. “I had a lot to say about how I felt as an African-American. We started talking about the lack of diversity and what we wanted to do. What could a political organization for black women look like? We came up with the name that day. I spent two years researching.”

As part of her political outreach, Carr is a speaker, spokesperson, trainer and writer. Her writing has been published in publications such as The Huffington Post, feminist.com, TheBrockReport.net, WalkersLegacy. com, TheRoot.com, BET.com, ebony.com and NBCBLK.com. She has appeared on Fox News Live, MSNBC and several other media outlets.