Massey Organ recital to showcase humor and laughter through music

The fun and laughter will continue this week during the Massey Organ Mini-Concert, with a selection of humorous music.

At 12:15 p.m. Wednesday, July 11, in the Amphitheater, Jared Jacobsen will perform “ROTBLOL, Again!” on the Massey Organ. This mini-concert is an extension of last year’s “ROTBLOL!,” an abbreviation for “Rolling Off the Bench Laughing Out Loud.”

“I’m doing a couple pieces I did last year to repeat them, then I’m doing some different stuff that I’ve discovered out of my fun piece drawer,” said Jacobsen, organist and coordinator of worship and sacred music at the Institution.

Within his “fun piece drawer,” Jacobsen discovered “Birthday Parodies for Organ” by Dan Miller, a collection of “Happy Birthday” variations. Jacobsen noted that the song “Happy Birthday to You” only recently became public domain, and that is cause for celebration.

The “Happy Birthday” copyright case surfaced in 2013, and the dispute was settled about three years later when the song was released for public use.

Jacobsen will also play “Variations on an Oriental Air,” which he developed as an ode to the classic tune “Chopsticks.”

“ ‘Variations on an Oriental Air’ is my fool title for this,” he said. “The Oriental Air is chopsticks, which everybody who has ever sat down at a keyboard has to try.”

The mini-concert picks up with the “Showpan Boogie,” a variation of the “Minute Waltz.” The “Minute Waltz” is a popular piece of music known for its lively tempo, though not all variations clock in at exactly a minute. The waltz, Jacobsen said, has created friendly competition among musicians who write variations in hopes of being the shortest.

In the spirit of carefree laughter, Jacobsen will include a piece from musician Charles Edward Ives. Ives, an American composer, created music that Jacobsen deemed “ahead of its time.”

The concert will include Ives’ “Variations on ‘America’ for Organ.”

“He had enough money to buy musicians to play his music, even if they didn’t understand it,” Jacobsen said. “So he’d have these legendary concerts in his home just so that the pieces would get heard once or twice. He didn’t really care if anybody understood it.”

Though much of Ives’ work went unnoticed during his time, Jacobsen sees value and humor in his compositions. The selected piece is fast and bold, and Jacobsen knows it will be well-received.

“It works at Chautauqua because here, audiences get the joke,” he said. “I’ve played it a lot of places around the world and most of the time people don’t get the joke because they’ve never been to a concert where they’re allowed to laugh.”

The concert concludes with a “Television Theme Trio” by Mark Peterson, a piece that includes three famous theme songs: the theme from “Perry Mason,” the theme from “Mission: Impossible” and Fugue in F Minor from “The Munster.”

“I’m going to try this out because I haven’t played it anywhere yet before,” Jacobsen said. 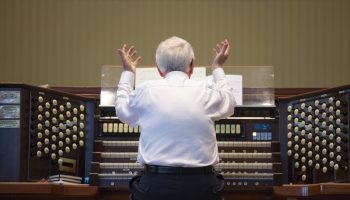