Reimagining helps us see what could not see, Michael-Ray Mathews says 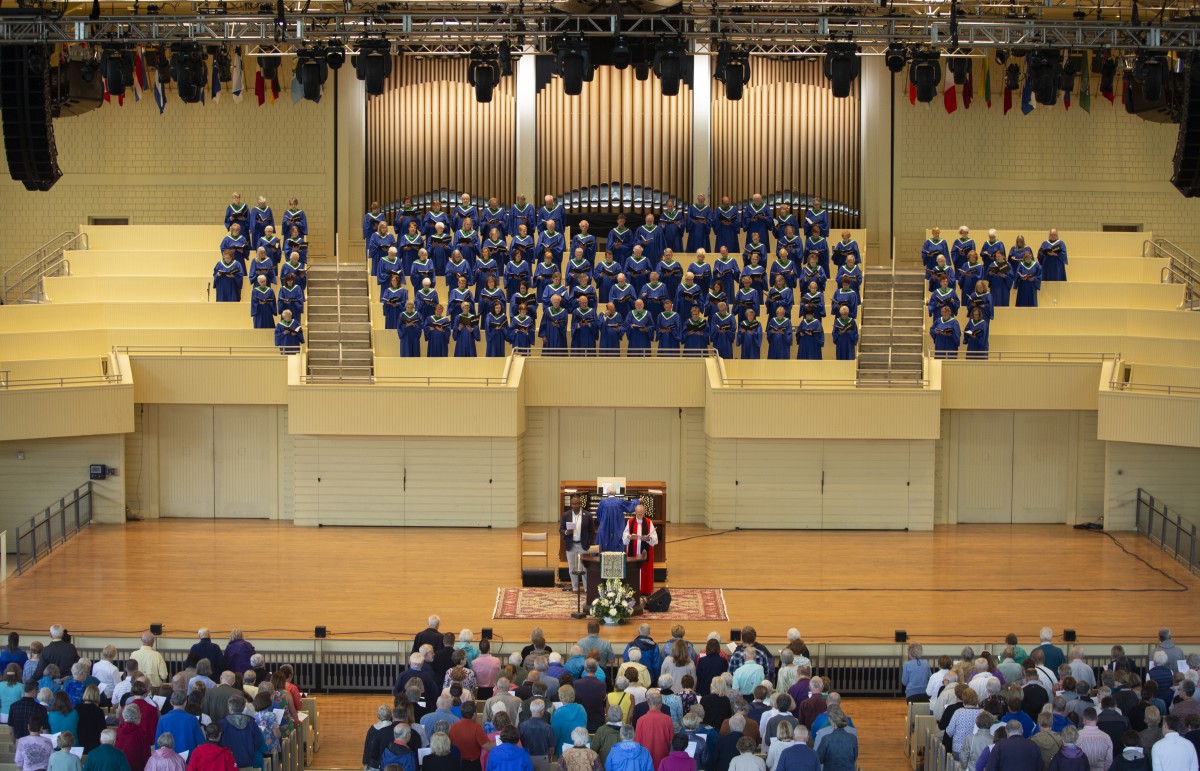 As on previous days, the Rev. Michael-Ray Mathews began his sermon by singing. He sang “Lord, I hear of Showers of Blessing:”

“Lord, I hear of showers of blessings

Thou art scattering full and free

Let some droppings fall on me,

Even me, even me,

Let thy blessing fall on me.”

Mathews was preaching at the 9:15 a.m. Thursday morning, July 26, service of worship in the Amphitheater. His sermon title was “Reimagining: Seeing Now What We Would Not See Before,” and the Scripture text was Mark 7:24-30, Jesus and the Syrophoenician woman.

“I confessed earlier in the week that I like to binge-watch British television,” Mathews said.

He named a number of shows, including “Luther,” “Broadchurch,” “The Crown,” “Peaky Blinders,” “Black Mirror,” “Death in Paradise” and “Midsomer Murders.”

“It is contemporary, fun, well-written, with great actors and a cult following. I went to a local theater to see the Christmas special with all the other nerds,” he said. “I could not wait for it on my television.”

Mathews loves how Sherlock creates a “mind palace” in his imagination to store mnemonics, images, clues and associations to help solve cases, protect himself and defeat his foes.

“I have kind of a mind palace,” Mathews said. “I remember the places I have been, can identify songs with just a couple of notes, foul smells, conversations, new songs, dates, times and phone numbers.”

Before cell phones, Mathews’ younger siblings would call him for a phone number, sure that he would remember it. His friends called him FON — freak of nature.

“That is probably why Otis Moss III gave me the nickname Forge, an intuitive engineer who creates tools to fight battles,” Mathews said.

Mathews told the congregation that they need to cultivate and nurture the imagination.

“The imagination is the primary source for organizing,” he said.

When Mathews first started doing organizing work, he tried to model himself on the veterans who nurtured him so he could “get into the mindset.”

“I thought I needed an organizer’s mindset, that I had to shed my pastor’s clothes,” he said. “I thought that a pastor’s orientation was deficient, that I could not be a real organizer if I was a pastor.”

It was not until he failed that he learned to trust his own gifts.

“I am a pastor in whatever role; something of being a pastor will show up wherever I am,” he said. “It informs my relationships and leadership and how I see the world.”

Mathews’ “mind palace” is rooted in his identity as a pastor, and he uses it to organize the faith leaders of Faith in Action.

“I wake up every morning and say to myself, ‘I am the pastor to a group of multifaith leaders; what do they

From a culture of imagination, the prophetic “imaginarium” is created, he said.

“It is a place to sort out what is happening in the congregation and the world,” Mathews said. “It becomes a theological and ethical resource.”

As a pastor, he seeks the imaginarium to find a moral compass for encounter, disruption, reimagining and prophetic action, “to see what I could not see before.”

In Mark’s story of Jesus’ encounter with the Syrophoenician woman, Jesus becomes the student in the story. He sees what he could not see before.

Jesus was tired from “a long week preaching at Chautauqua,” Mathews said.

“Oops, I mean a long week of preaching and healing with his own people,” he said.

In the region of Tyre, Jesus thought he could remain incognito and he was annoyed by the demands of a Gentile woman.

“Why Jesus and his crew were surprised that they would encounter a Gentile woman in Gentile territory is beyond me,” Mathews said. “That is like a gentrifier who buys a house in a black neighborhood next to a black church and calls the police because the gospel music’s too loud.”

The Syrophoenician woman insisted on being seen and being heard by Jesus.

“This is encounter, disruption, reimagining and prophetic action wrapped up in seven verses,” Mathews said.

The woman was inviting Jesus to practice imagination with her, what theologian Walter Brueggemann called “sustained, emancipated imagination.”

Empire sets the narratives about who we are and why things are the way they are, Mathews said.

“Empire tells us that blacks are lazy, Muslims are terrorists, women are hysterical, immigrants are murders,” he said. “Empire then sets up the structures, policies and practices of society.”

Three pillars hold up Empire; they are social and political (hierarchy), economic (scarcity) and ontological or spiritual (isolation).

The first pillar is hierarchy, which is built on supremacy.

“White supremacy, male supremacy, hetero supremacy, even Christian supremacy say that some lives matter more than others and some perspectives are more important than others,” Mathews said.

The second pillar is scarcity.

The third pillar is isolation, defined as hyper-individualism or hyper-tribalism. This is the ontological notion that success is by individual effort alone and that hyper-individuals gather together to all look, talk and act alike.

“This is what it is like to live in Empire and to have Empire live in you,” Mathews said.

The Syrophoenician woman was repudiating Empire, and she would not allow Jesus to live in Empire.

“She called ‘BS’ on Jesus’ attempt to dismiss her,” Mathews said. “You know, the greater the distance from the problem, the more you can philosophize about it.”

Oppressed people, he said, are good at analysis, and they know the answers to their problems.

“They help us to see what we could not see before,” he said.

The Theology of Resistance helps us move from Empire to Beloved Community, he told the congregation.

“It moves us from hierarchy to dignity, from scarcity to abundance and from isolation to joyous belonging,” he said.

In Mathews’ version of this story, Jesus reflected on hierarchy, scarcity and isolation. He told the woman that he was only sent to the children of Israel and that there was only enough to feed the children.

The woman rejected the hierarchy and told Jesus that even the dogs get the crumbs. She showed up and refused to leave. She told Jesus there was enough for everyone. She was willing to put up with a cultural insult, being called a dog, to repudiate Empire.

“She used prophetic imagination to make the connections between personal pain and public practices,” Mathews said. “She brought her moral imagination with her so that Jesus would see her and her daughter and her people.”

Before and after this story in Mark, Jesus is breaking rules and extending the moral imagination of the kingdom of God.

“It is hard to read this text because we are used to Jesus being a teacher, of having the moral high ground, of being nice and loving,” Mathews said.

How do we understand Jesus in this story? Mathews said “there is no nice way to reconcile” it.

“People have said that Jesus’ words and actions were a reflection of his culture,” he said. “Others have said he was acting out bigotry to teach his disciples a lesson. Others say that as he lived, he grew, he evolved.”

If Jesus can evolve, then grace must be real, Mathews said.

“Our call today is to reimagine a new people, a new America, a new world,” he said.

We can’t engage, he told the congregation, “without turning aside to see an uncommon event, without experiencing the disruption, without cultivating the moral imagination to be able to see what we could not and would not see.”

It is the hard, painful wisdom of uncommon encounters and the disruptions that help us to grow and expand with each new encounter, he said.

“May the drops of grace and power fall on me, even on me,” Mathews said.

The Rev. John Morgan presided. Zach Stahlsmith, head of the woods crew for Chautauqua, a lifelong Chautauquan and a student at Colgate Rochester Crozer Divinity School, read the Scripture. For the prelude, Barbara Hois, flute, Debbie Grohman, clarinet, and Willie La Favor, piano, performed “Like the First Bird” by Gwyneth Walker. The Motet Choir sang “Ave Maria” by Jaakko Mäntyjärvi, under the direction of Jared Jacobsen, organist and coordinator of worship and sacred music. The Robert D. Campbell Memorial Chaplaincy provides support for this week’s services.

Behind the scenes: ‘Airness’ booth and backstage crew make work look like play, rocking out in the wings