The Rev. Skye Jethani loves to explore the intersection of faith and culture and works to help people understand the questions that are raised in that intersection. 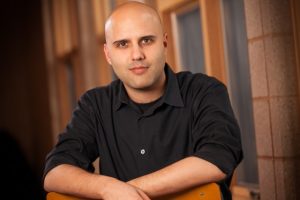 Just look at some of the titles of his articles for The Huffington Post: “An Evangelical Case for Gay Wedding Cakes,” “Evangelicals Are Too Political and Other Myths,” “Is This The End Of ‘Evangelicalism’?,” Why Evangelicals Must Defend Muslims,” “Christians Are Fighting The Wrong ‘War On Christmas’ ” and “How Interfaith Cooperation Honors God: An Evangelical’s Perspective.”

Jethani will be the chaplain for Week Six at Chautauqua. He will preach at the 10:45 a.m. Sunday morning worship service on July 29 in the Amphitheater. His sermon title is “But Now I See.” He will share his faith journey at the 5 p.m. Sunday, July 29, Vespers in the Hall of Philosophy.

He will preach at the 9:15 a.m. morning worship services from July 30 to Aug. 3 in the Amp. His sermon titles include “Work is a Gift,” “Healing the Sacred/Secular Divide,” “Planting Roses as the World Burns,” “The Right Way to Play God” and “God Does Not Need You.”

Jethani is an author, speaker, consultant and ordained pastor. He is the co-host of the weekly “Phil Vischer Podcast,” now called “The Holy Post,” with Vischer, who is the creator of “VeggieTales.”

Since 2004, Jethani has occupied numerous roles at Christianity Today, a leading evangelical publication. He served as both the managing and senior editor of Leadership Journal, as the director of mission advancement for Christianity Today and as senior producer of This Is Our City, a multiyear, multi-city project telling the stories of Christians working for the common good of their communities.

He has consulted for the Lausanne Movement, the White House Office of Faith-Based and Neighborhood Partnerships and Interfaith Youth Core, and has written for numerous publications, including The Washington Post, and is a regular contributor to The Huffington Post.

As a speaker in recent years, Jethani has led workshops on topics that include faith and consumerism, interfaith cooperation, global mission, church trends, Christianity and politics, biblical justice, faith and vocation and common good Christianity.

Author of numerous books, Jethani writes for “With God Daily Devotional,” a subscription-based daily email designed to help a smartphone generation begin the day with God.

Ordained in the Christian and Missionary Alliance, a Protestant denomination established in 1887, he earned a master’s of divinity degree from Trinity Evangelical Divinity School in Deerfield, Illinois. He received his undergraduate degree from Miami University in Ohio, concentrating in history and comparative religion with a special focus on Islam, as well as Buddhism, Judaism and early Christianity.

Set aside immaturity to feast at Wisdom’s table, says Harper in sermon: ‘Lean in and listen’