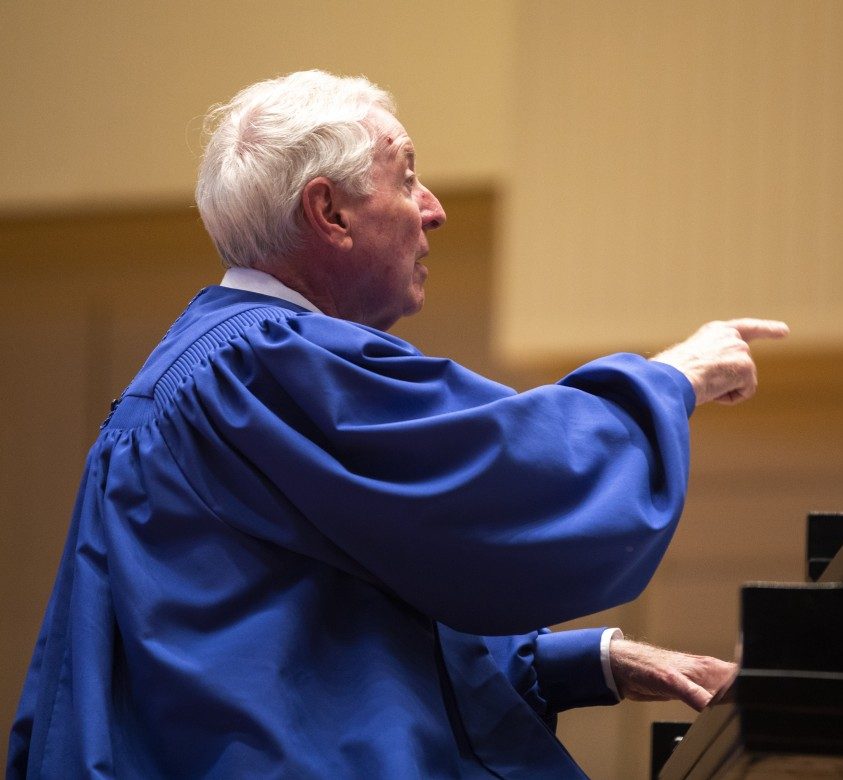 In 2015, American musician Ken Medema visited Chautauqua for the first time. Medema, who has been blind since birth, was guided through the grounds by Jared Jacobsen, the Institution’s organist and coordinator of worship and sacred music.

Jacobsen had admired Medema’s work for years and had an inkling he would be “the perfect match” for Chautauqua. The moment the duo began their walking tour, Jacobsen knew he was right.

“Because I’ve been here for so many years, I know every nook and cranny of this place, so I love hearing about it from people who are seeing it for the first time,” Jacobsen said. “To walk around Chautauqua with Ken Medema was just amazing to me. He would walk into a space and say, ‘This seems like a really big place’ or ‘This seems like it was surrounded by trees.’ It was fascinating to me.”

At 8 p.m. Sunday, July 29, in the Amphitheater, Jacobsen will celebrate his admiration for Medema with the performance “Hearts Touched by Hymns: Music and Storytelling with Ken Medema.” This Sacred Song Service includes original pieces by Medema, who Jacobsen believes is “equal parts musician and storyteller.”

Medema has recorded over 40 albums, spends much of his time traveling and has performed in 49 out of the 50 states. Despite his busy schedule, Jacobsen said Medema is conscious of forming personal connections no matter where he goes.

“He has this way of taking any size group of people of any age and making them his own family,” Jacobsen said. “He’s coming to us from Colorado, where he is doing a gigantic youth rally, but I’ve seen him work one-on-one with people. It’s going to be amazing.”

In the spirit of personal connection, the service will include “Opera on the Spot!” which is an original title coined by Jacobsen. This is a style of musical performance that engages the audience.

“Ken will have me wade out into the congregation with a microphone and just ask people what their favorite hymns are and if there’s a story there,” Jacobsen said. “He will listen to half a dozen of these while I’m walking around and he will weave that into an opera, and then he’ll perform it on the spot. The stories that surface are absolutely amazing.”

The choir will also perform “Lord, Listen to Your Children,” an original Medema piece that Jacobsen said is personable and welcoming.

“Pretty much everything Ken does somehow feels like you’re praying with him,” Jacobsen said, “no matter what your tradition is.”

The service includes “Healer of Our Every Ill,” a hymn written by Marty Haugen that Medema reworked with his own music. Medema will also perform this piece at the Sunday morning service, which Jacobsen hopes will create an opportunity for more Chautauquans to hear his music.

“We’ll get a chance for the whole Chautauqua community to experience this, both those who come in the morning and those from off the grounds, as well