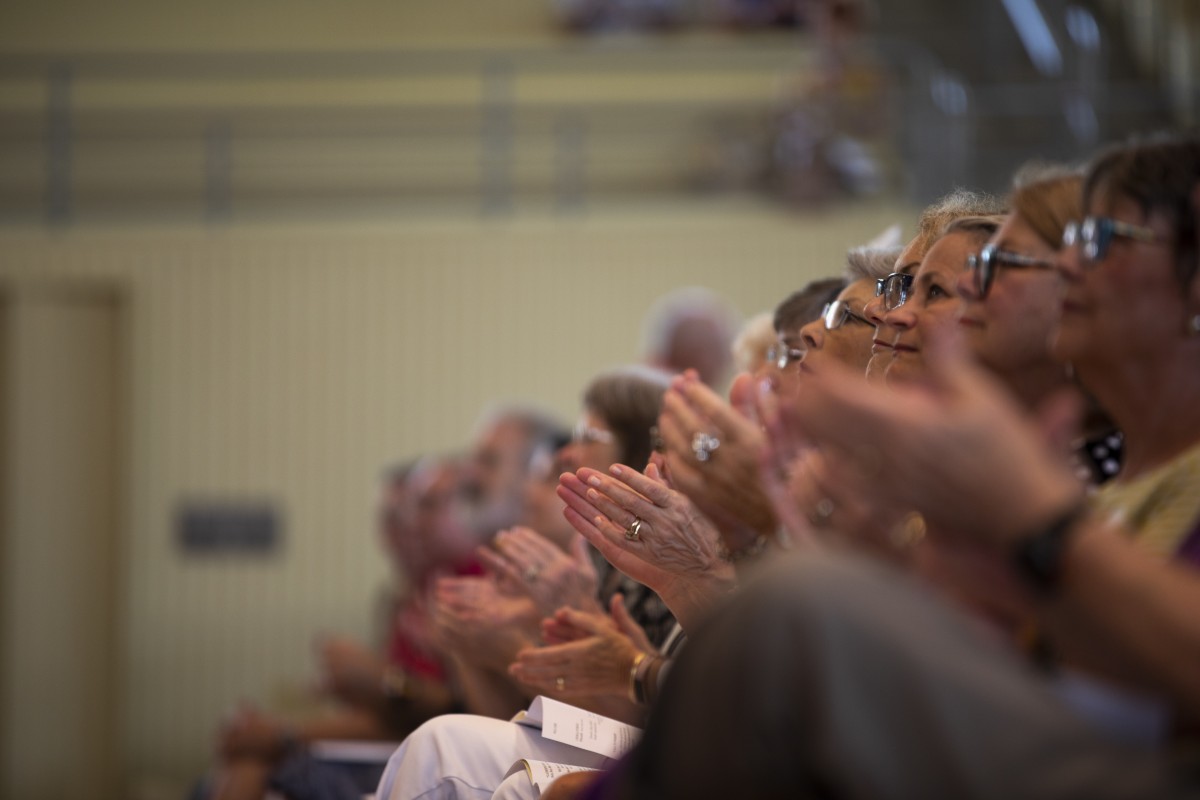 What happens when you wrestle with God?

“You walk away with a limp and a blessing,” said the Rev. David Shirey.

He was preaching at the 9:15 a.m. Wednesday, August 7, morning worship service in the Amphitheater. His sermon title was “Wrestling with God,” and the Scripture text was Genesis 32:22-32, Jacob wrestling with a man at the Jabbok river.

“We have to acknowledge that being immersed in the arts involves seasons of struggle,” he said.

Writers get writer’s block, a musician sometimes can’t get a run of notes to flow, an actor is not comfortable with the way a scene is coming together.

“There are also seasons of struggle with the art of faithful living,” he said.

Shirey had a seminary professor who wanted to start a retreat center called Peniel Ridge, a place to wrestle with God.

“I told him he had the wrong name,” Shirey said. “People would come to Happy Holler or Mountains Majesty. Who would choose to wrestle with God?”

There are some people who believe that you should not wrestle with God, he told the congregation.

Shirey had a high school friend he had not seen in a while, and they met at a reunion. His friend asked what Shirey did, and when he told him, “I am a pastor,” the friend’s eyes dropped.

When Shirey probed for a response, his friend said: “I have not been in church for a long time. When I was in confirmation class, I asked a lot of questions. One day after class, the teacher told me, ‘You ask too many questions,’ and when I got home, it was clear there had been a phone call. My mother said, ‘Why can’t you just believe what you are told?’ ”

“It is alright to wrestle with God and strive with Scripture,” Shirey said.

In one of Shirey’s seminary classes, a student started to say, “This might be a dumb question.” The professor stopped him and said there are no dumb questions.

Jesus, he said, never told the disciples or the people around him that they asked too many questions.

There are some people who believe that we need not wrestle with God, he told the congregation.

“This is what I call ‘all ya gotta do Christianity,’ ” Shirey said.

All you have to do is pray, read the Bible, confess your faith in Jesus as your savior, ask forgiveness of sins, love God and people.

“Is praying easy?” he said. “Have you ever really tried to read the Bible, love your enemies, do justice over a sustained period of time?”

Then there are the people who will not wrestle with God. Shirey called them lazy and apathetic.

Shirey and his wife were in a small group at their church in St. Louis. The group had gone deeper and deeper into trust and understanding, and they were about to make an important decision that would require everyone to stretch and sacrifice.

“I only want to go so far in my religion,” one woman said. “I don’t want to struggle, stretch or move out of my comfort zone.”

“Would you chose to go to Peniel to wrestle with God?” Shirey said. “Some say you should not, some say you need not and others just will not.”

However, he told the congregation, we may have to go to Peniel. There are some seasons of life when we have no choice.

Shirey looked at a map and found that the path to the Promised Land went through Peniel and the Jabbok River.

This is full scale reconstruction, he said.

“God breaks us down and builds us back up,” he said. “It is anvil time — we are hammered, stretched and pounded.”

Theologically and geographically, we have to go to Peniel.

“We recognize some of the paths that take us there: when we have to make an important decision, when we are trying to discern God’s will, when we are grappling with addictions, when we are asking for forgiveness or giving forgiveness,” Shirey said.

What happens to someone who goes to Peniel and wrestles with God?

“They walk away with a limp,” he said. “To live a life of faith with integrity means you walk with a limp.”

Anyone who has raised children, who lives a deeply shared life with another person, who has invested themselves in a congregation, walks with a limp.

But you also walk away with a blessing, he told the congregation.

There is no greater challenge or adventure than to be fully engaged with the creator of heaven and earth, he said.

Shirey stepped from behind the pulpit to demonstrate his last story.

When Shirey was a boy, he and his brother and sister would wait until their father, Keith, would fall asleep on the floor watching television. They would pin his arms and legs and then tickle him under the chin. He would laugh uncontrollably.

Then their father would put his sister in a knee lock and his brother in an arm vise and give Shirey “a bear rub with his two-day old beard.” Then he would shake them all off and as they skulked off crying, he would say, “That will teach you to wrestle with King Keith.”

“We were back 10 minutes later,” Shirey said. “He has been gone 31 years, and what I would not give for one more time to wrestle with him.”

For those who are willing to wrestle with God, he said, “you will walk away with a limp, and you are blessed for such faithfulness.”

The Rev. J. Paul Womack presided. The Rev. Carla A. Grosch-Miller, a practical theologian, educator and poet from Northumberland, England, read the Scripture. The sacred music for the day was the fourth movement, “Adagio” from Symphony for Organ No. 5 by Charles-Marie Widor, played by Jared Jacobsen, organist and coordinator of worship and sacred music. The Motet Choir was singing at the Chautauqua Literary and Scientific Circle graduation ceremonies. The Gladys R. Brasted and the Adair Brasted Gould Memorial Chaplaincy provides support for this week’s services.