When writing The Fact of a Body, Alexandria Marzano-Lesnevich drank coffee from a mug that read “creative nonfiction.”

“Because you can’t make this stuff up,” Marzano-Lesnevich said.

For example, the prosecutors in the book — who only handle death penalty cases — were named Frey (pronounced like a crisped potato) and Killingsworth.

Marzano-Lesnevich’s The Fact of a Body received the seventh annual Chautauqua Prize on Friday, August 3, in the Hall of Philosophy.

President Michael E. HIll presented Marzano-Lesnevich with the physical Prize, which is inspired by and specially designed for the winning book each year.

Drawing from the interwoven nature of storytelling in The Fact of the Body, Jamestown artist Debra Eck used paper, thread and plexiglass to create the delicate Prize.

This year, Chautauqua community members made up the 75 readers who evaluated 198 nominations from 83 publishers and imprints. From there, seven finalists awere chosen, and ultimately one winner.

The Fact of a Body weaves memoir, murder, journalism and true crime to tell the story of Ricky Langley, convicted murderer and child molester. As Marzano-Lesnevich delves deeper into Langley’s life, their own experience with abuse rises to the surface.

Marzano-Lesnevich has taught at Harvard University and will start teaching at Bowdoin College this fall. They have received fellowships from the National Endowment for the Arts, MacDowell Colony and Yaddo. In addition to the 2018 Prize, The Fact of a Body received the 2018 Lambda Literary Award for Lesbian Memoir/Biography.

Marzano-Lesnevich began their talk by thanking Chautauquans for the interdisciplinary and “interesting” conversations they have had thus far.

“It’s such a beautiful endeavor to say, ‘We’re going to come together and we’re going to talk about these urgent issues and (create) this beautiful place,’ ” they said.

With that spirit in mind, Marzano-Lesnevich began with a reading from The Fact of the Body, Chapter 1, which is set in Louisiana, 1992.

A 6 year-old boy, Jeremy Guillory, “wears sweatpants the color of a Louisiana lake,” Marzano-Lesnevich read. The police report said the color is “blue,” but the boy’s mother insists they are “aqua or teal.”

In rich detail, the passage chronicles Jeremy setting down his prized toy, his Daisy-brand BB gun, outside Langley’s house. Langley, who made money by babysitting, watches Jeremy play.

“Watching changes something in him,” Marzano-Lesnevich read.

Langley strangles Jeremy to death before carrying the young boy to Langley’s own bedroom. He covers Jeremy in a blue blanket. He strokes his blond hair.

“I know that’s a difficult passage to hear, a difficult section,” Marzano-Lesnevich said after reading. “But I always begin with it, … because in everything I’m about to say about this book, I don’t ever want to lose sight that it’s hard; it’s a real little boy, Jeremy Guillory, who lost his life that day in 1992.”

Marzano-Lesnevich first encountered the case as a Harvard law student when they interned at the Louisiana law firm that was defending men facing the death penalty.

“I’m the child of two lawyers,” Marzano-Lesnevich said. “I grew up literally talking about the Constitution over the dinner table.”

They even remember first learning about the death penalty.

“I’ve since realized, of course, that this is not a formative memory for most American children,” Marzano-Lesnevich said.

Strongly opposed to the death penalty, Marzano-Lesnevich thought they would commit their life to fighting for those facing death row.

At 25 years old, Marzano-Lesnevich showed up to work in their first suit: brown polyester, anything but ideal for the Louisiana heat.

“We want to show you who we’re defending,” Marzano-Lesnevich was told during orientation.

Langley’s confession tape played on the screen. Marzano-Lesnevich watched him “describe the pleasure he took in” molesting children.

“But suddenly, I wasn’t 25 anymore,” they said. “Suddenly, I was a child, and I could feel my grandfather’s hands on me. I grew up being molested. And in that moment, despite what I believed, despite what I had wanted to spend my life doing, I wanted Ricky Langley to die.”

Marzano-Lesnevich learned that Jeremy’s mother, Lorilei Guillory, actually defended Langley. She did not forgive him, but she did not want to see him die.

This raised many questions for Marzano-Lesnevich, questions that became the “driving force” for writing The Fact of a Body.

After finishing law school, Marzano-Lesnevich did not become a lawyer; they felt “uncomfortable” doing so when cases felt personal to them — and every case is personal to somebody.

Marzano-Lesnevich went back to school to study fiction writing, but never forgot the Langley case.

The color blue or a BB gun crept, somehow, into their writing. Marzano-Lesnevich remembered every detail, except one fundamental element: the killer’s name.

“I eventually realized that there was only one other such moment in my life, only one other moment of such perfect excision, where I remembered everything else about it, but not small details,” Marzano-Lesnevich said. “And that was when my grandfather asked me if I forgave him for what he’d done to me.”

Realizing these stories were connected, Marzano-Lesnevich wanted to do anything to get the case out of their head, to avoid writing The Fact of a Body.

“We are haunted by what we don’t fully understand,” Marzano-Lesnevich said.

They thought research — in the form of 8,000 court documents — would do the trick.

Over the course of 20 years, Langley was tried three times.

Yet there will soon be a fourth trial — 26 years after Jeremy’s death — because of how the story of the murder was told.

Marzano-Lesnevich realized they were not the only person who “interpreted” Langley’s story through the lens of their own life.

“We carry what makes us,” they said.

And that, they realized, was the story they wanted to tell.

With three families, 60 years and eventually 30,000 court documents, The Fact of a Body weaves together a “faint” and “human” line that shows the reader how “we make stories out of past” and how that shapes our interpretations, Marzano-Lesnevich said.

Like the members of the jury, as Marzano-Lesnevich reviewed the “facts” of the case, their own past shone through.

And that’s why there have been so many narratives and retrials surrounding the Langley case, according to Marzano-Lesnevich.

“What you see in Ricky may have more to do with the life you’ve lived than what he did,” they said.

Before a final reading from The Fact of a Body, Marzano-Lesnevich talked about forgiveness.

As a child, during the extremely rare moments when the “family secret” was discussed, Marzano-Lesnevich was told they must forgive their grandfather.

“I remember the extraordinary amount of pressure I felt with that word placed on me,” Marzano-Lesnevich said, “because it had an element of erasure to it.”

In this context, forgiveness was synonymous with letting it go, moving on, erasing.

“As a child, that was quite hard because I knew … I carried this,” Marzano-Lesnevich said. “I still carry this in my body. There’s nothing I can do that’s going to make that go away; nothing I can do.”

Marzano-Lesnevich realized that, like so many complexities, forgiveness means something different to everyone. And that instead of forgiveness, empathy was more relevant in this situation.

“Ricky Langley is the murderer and the man. … My grandfather was my grandfather, and he’s also the man who molested me and my siblings,” they said.

Marzano-Lesnevich ended with one concluding thought.

“We all have our stories,” they said. “We all carry what makes us.”

During the Q-and-A, one attendee asked how Marzano-Lesnevich remembered the vivid details of their childhood.

In their answer, Marzano-Lesnevich said that in addition to personal memory, they had talked to their grandfather about what he had done, and that “he was very clear-minded about everything that had happened and was almost shockingly upfront about it.”

Another attendee asked about the different response of Marzano-Lesnevich’s sister to what had happened; both siblings were abused at the hands of their grandfather, both in their shared childhood bedroom, watching while it happened to the other.

“It’s complicated, as many things are,” Marzano-Lesnevich said. “ … She is very upfront (that) she was abused, but quickly distinguishes it as ‘I have decided to think of myself as someone who wasn’t,’ which is a duality.”

They added that they worried their sister would not be comfortable with the book being written.

“I am grateful to her and to the other members of my family that they decided they were comfortable with it,” Marzano-Lesnevich said. “They’ve all read it, but it was important for me to include that other perspective.”

Another person asked if Marzano-Lesnevich ever wished for their grandfather to die.

“It’s quite difficult when it’s the person who you also love,” they said.

Marzano-Lesnevich remembers the moment, as an adult writing The Fact of a Body, when someone pointed out that they were writing a tale of “two crimes.”

“I am a lawyer by training,” they said. “But it had never occurred to me that of course what my grandfather did was a crime. … (It’s just a crime) that we mostly don’t put people in prison for.”

Week Three Letter from the President

Week Two Letter from the President 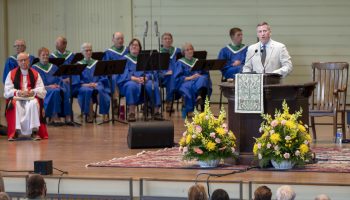 Let us take a more joyous strain: the 2021 season opens