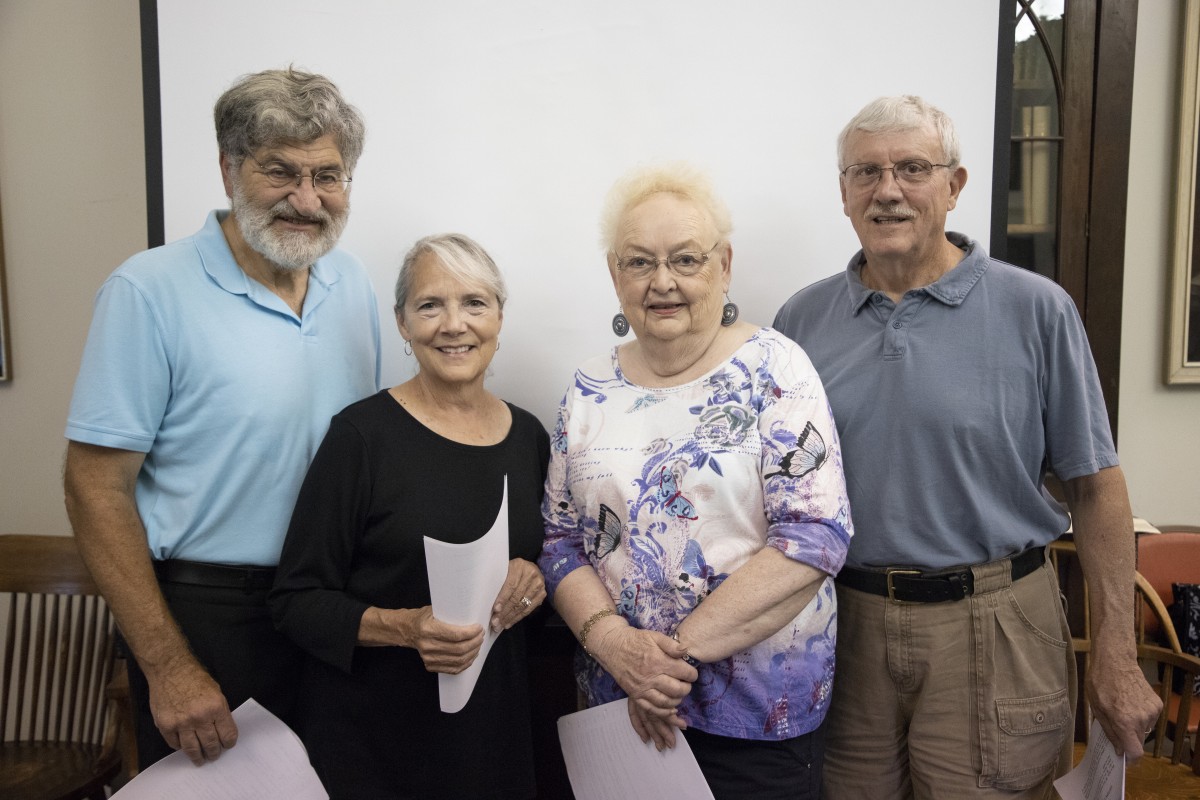 Although their show is set in the chilly northeastern United States, members of Friends of Chautauqua Theater hope their staged reading of Almost, Maine will warm the hearts of theatergoers.

Throughout the summer, FCT has supported art from the wings by hosting play discussions and opening night parties for each CTC mainstage production’s cast and crew.

This weekend, however, they will be the ones in the spotlight. At 10 a.m. Saturday, Aug. 25, in Elizabeth S. Lenna Hall, the group will perform a staged reading of Almost, Maine, John Cariani’s popular comedy about a series of couples who find or rekindle love in a fictional, snow-covered town.

“It was our holiday playreading, as was Love/Sick, the other play by Cariani performed last year,” said Bob McClure, the producer and director of Almost, Maine. “It just is a natural for this last day of the season.”

Almost, Maine consists of various “Love, Actually”-esque vignettes. In one, a woman shows up on her ex-boyfriend’s doorstep to return the “bags of love” he gave her. In another scene, titled “They Fell,” two female friends discover their feelings are far from platonic.

McClure, a former president of FCT, said the performance will feature comedian and pianist Mark Russell, as well as pianist Don Conover and singer Ernest Harada. The performance is free of charge, but FCT will accept donations to go toward CTC’s 2019 season.

During the staged reading of Almost, Maine, the actors will have their scripts on hand in case a line is flubbed. Costume elements like gloves and jackets will establish the setting, as will projections and a door frame recognizable from Into the Breeches!, CTC’s final mainstage show of 2018.

Given the play’s minimalist set and versatile casting combinations, Almost, Maine is a popular choice for regional theaters, with over 2,700 productions and counting. Since 2010, the play has regularly appeared on the list of most-produced plays in American high schools every year, jockeying for the top spot with A Midsummer Night’s Dream, according to data collected by Dramatics magazine.

McClure said Almost, Maine’s malleability allowed him to embed another vignette into the staged reading’s program. Halfway through the performance, the readers will take a break from Almost, Maine to act out a scene from Neil Simon’s The Sunshine Boys.

“(Actor) Dave Tabish came up with the idea of Sunshine Boys,” McClure said. “I was in rehearsal with him yesterday, and I couldn’t stop laughing.”

Ironically, the 2006 premiere of Almost, Maine was an off-Broadway flop. In his review for The New York Times, Charles Isherwood wrote it “may leave the cloying aftertaste of an overly sweetened Sno-Kone.” The show closed soon after.

“Some of that has to do with places for our company members to escape and have a civilized meal or do their laundry,” Borba said. “The best thing I think the Friends do in that way is they are not just a conduit, but they are liaisons to Chautauqua as a whole.”

Borba said the members of FCT are more than just loyal patrons of the arts.

“They are — dare I say it — our friends,” he said. “They are the people we like and interact with while we are here.”

During the off-season, Chautauqua Play Readers — a subgroup of FCT — hosts eight play readings, at least two of which will be featured on CTC’s mainstage the upcoming summer.

The others, McClure said, are chosen for their humor, like Light Up the Sky, or their relevance to contemporary issues, such as last September’s read: Sweat, a play about Pennsylvanians struggling to adapt to the changing steel industry.

“It was a very important play and brought up a lot of issues that are important to people,” McClure said.

In addition to its monetary support of CTC, McClure said FCT’s familiarity with the mainstage plays help the group better engage with the theater’s content.

“Our group has studied and looked and read the plays,” Bob McClure said. “We are serious audience members, if you will, and serious supporters of our own interest in theater and what Chautauqua Theater Company does.”