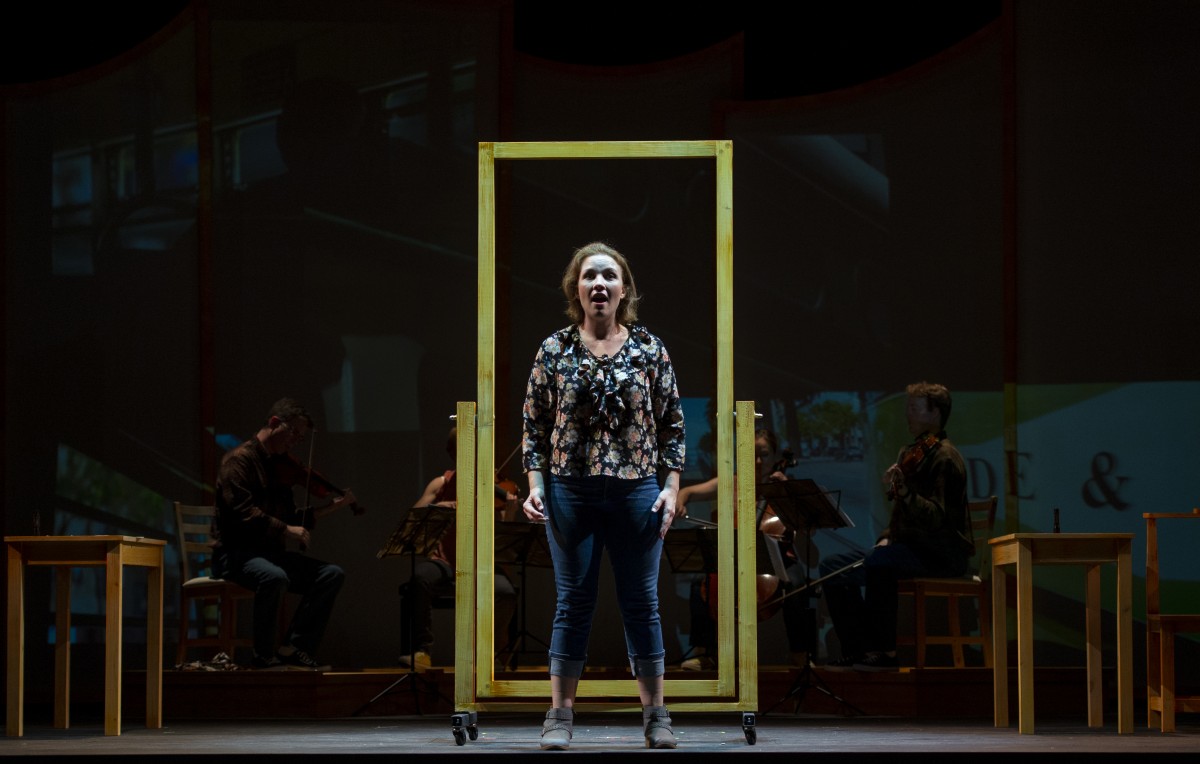 More than 12 hours after Chautauqua Opera Company’s production of As One, Joey Reyes was still processing the material.

It was the first time Reyes had seen a transgender person as a main character in an opera, and they said the piece provided a base knowledge of what it’s like to be transgender.

“In the sense of the greater world, as far as my knowledge, it’s adding to the canon of opera, especially contemporary opera, and being able to bring exposure to a very specific narrative of one particular experience,” said Reyes, who is an office manager for Chautauqua Theater Company and was a panelist in last Sunday’s As One Community Day discussion on Aug. 5.

Preparation for As One, with music and concept by Laura Kaminsky and libretto by Mark Campbell and Kimberly Reed, started in Week One with open rehearsals, which acted as a way to familiarize potential audiences with the work. Two days before the opera production in Norton Hall, Chautauqua Institution held a Community Day so visitors could learn more about the piece. And on Tuesday, Aug. 7, Chautauquans finally saw the full piece with the original musical team.

Betty Lollis, of the Chautauqua Association of the Disciples of Christ and former hostess of the denominational house, was at the Community Day and listened with empathy to the stories the panelists told. Lollis attended Tuesday’s production on Aug. 5 and was captivated by the story and the music. Lollis liked the aspect of having two characters play Hannah, showing how Hannah became the person she truly was.

School of Art student Hannah McBroom had the opportunity to create the film used during the open rehearsals, so she spent most of the performance watching the audience’s reactions. She noticed the crowd was taking to the story, and it was eager and attentive.

In McBroom’s eyes, the most successful part of the opera was during the song “Out of Nowhere.” In the scene, Hannah gets attacked by a person who keeps repeating “What are you?”

While mezzo-soprano Sasha Cooke (Hannah After) sang on stage, baritone Kelly Markgraf (Hannah Before) walked through the audience and said the names of murdered transgender people. As Markgraf said the names, he dropped white pieces of paper with the victim’s names on them. Listening to the music, watching the film on stage and Markgraf in the audience presented an “amazing moment of disorientation,” McBroom said.

The ending of the opera was personally moving for McBroom. Hannah After goes backstage and pulls Hannah Before out with her to signify an at-peace mindset.

Being in the audience allowed McBroom to feel everything that was going on in the opera, and she said it felt familiar.

“I feel like the audience was wanting to learn and connect with this experience where your mental state doesn’t correlate with the physicality of your being,” McBroom said.

The minimalist set allowed audiences to focus on the character of Hannah Before and Hannah After, said Jill Mooney, a Chautauquan who was in the audience for Tuesday’s performance. There were only several set pieces on stage, including two desks, two chairs and a mobile wood-framed piece. Chairs were used to represent different items, like a bicycle, and the wood frame served as a mirror, boat and dividing piece between the two guest artists.

“It was done in a way that was powerful, but it was real, and it wasn’t overly dramatic,” Mooney said.

Mooney thought the opera was missing an important familial aspect because she wanted to see how, or if, Hannah’s parents supported her during the transition.

In its 75-minute running time, Reyes said the opera goes through everything quickly and that it can be hard to show the transitionary period in that time frame. The opera also doesn’t show the “gray area” of transitioning by having binary actors on the stage, and people miss out on the middle ground, they said.

“They’re talking about the internal ongoings and whatnot, but you still have a cisgender male and a cisgender female on the stage, so it’s difficult to be able to witness the real transition period — the physical changes that are manifesting in someone during that time,” Reyes said.

Most people’s knowledge about transgender individuals comes from seeing their narratives in mass media, Reyes said. The fact that the libretto was co-written by Reed, a transgender woman, speaks volumes of the opera, but Reyes said people should take As One at “face value” and understand that not every transgender or gender non-conforming person’s experience is the same.

“Because of that, and because (As One) is mass art, and mass art is consumed by so many people, it can start to generalize a lot,” Reyes said. “That’s something I would always stress in any piece, is that this is one particular experience with a very specific character, with a very specific background.”