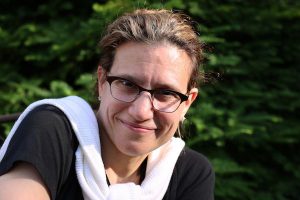 Sharon Louden has been working with Visual Arts at Chautauqua Institution almost as long as the program’s current artistic director, Don Kimes, has held his position.

Louden, who first visited Chautauqua Institution in 1992 after meeting Kimes the previous year, will take over his job next summer. Kimes, who has held the position for 33 years, is stepping down at the end of this season. He and his wife, Lois Jubeck, who has served as VACI managing director for 30 years and is also retiring, will head to Italy to work with the Pieve International School next summer.

Louden, who will be artistic director as well as the Sydelle Sonkin and Herb Siegel Chair for the Visual Arts, acknowledged that “those shoes are big,” but said she thinks Kimes and Jubeck gave her “a huge foundation to grow from.”

Louden most recently delivered a lecture in June on what it means to be an artist today.

For the last few weeks, Louden has been working on a museum commission at the University of Wyoming Art Museum in Laramie, Wyoming. The installation, made of aluminum, will open to the public on Saturday and is meant “to complement or have a dialogue with” the museum’s modern architecture, she said.

Louden holds degrees from the School of the Art Institute of Chicago and Yale University’s School of Art, and she’s taught since 1991 at various institutions, including the Kansas City Art Institute, Maryland Institute College of Art and Vanderbilt University.

Next summer, Louden said she’s “looking forward to learning, listening and engaging with Chautauquans and those who are visiting.”

Louden wants School of Art students to consider her a “peer” when she takes over.

“My role will be … someone who is a colleague,” Louden said. “(So) we can have an exchange that is professional and engaged and we’re on the same team.”

Louden plans to continue Kimes’ practice of bringing in new faculty each year, and growing the number of instructors to represent even more “different voices,” she said.

“(Louden) offers an unmatched combination of being recognized nationally, committed locally and engaged socially through her generous spirit and much-lauded accomplishments,” Moore said in a press release announcing Louden’s appointment.

One of Louden’s favorite aspects of Chautauqua Institution are its lectures, and she looks forward to them next summer.

“I love to attend all the lectures,” Louden said. “I love going to the Hall of Philosophy. … I love the music, dance, theater. I will be going to all of those things and bringing the students with me.”

Above all, Louden said, she admires the “thought leadership” that Chautauqua fosters among its residents and visitors.