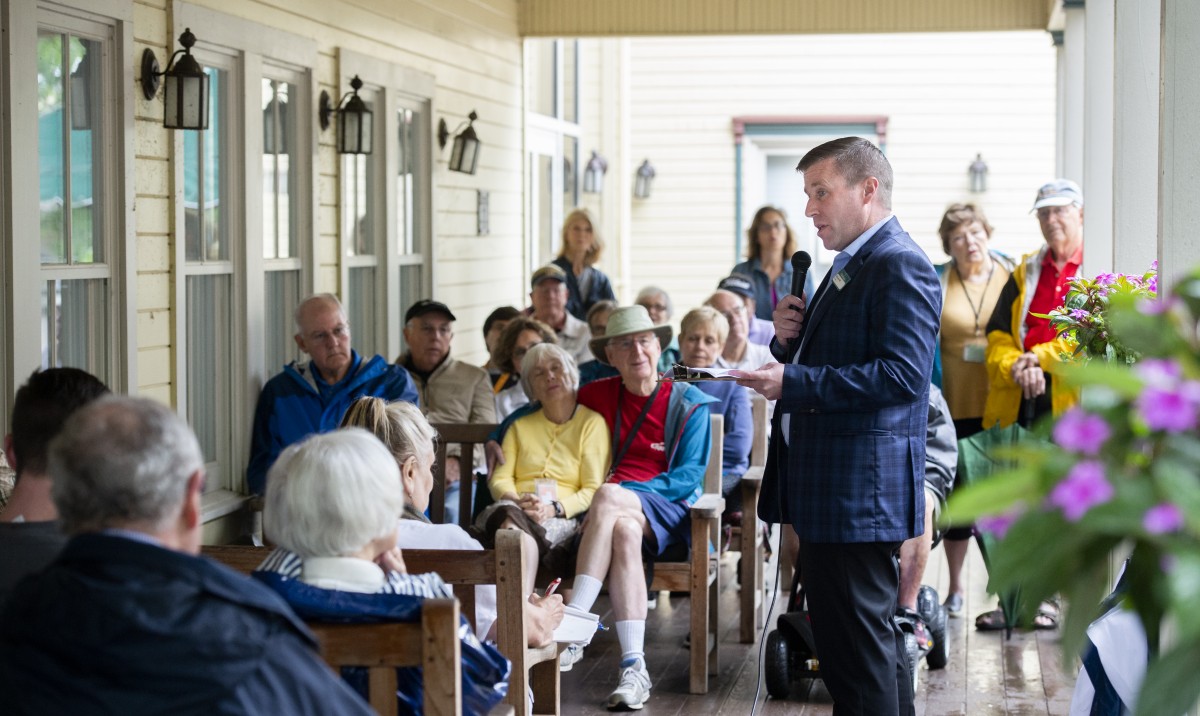 At 9:30 a.m. Wednesday, Aug. 22, at the Hultquist Center, Chautauqua Institution President Michael E. Hill held the season’s final Institution Leadership Porch Discussion. Hill addressed both shortcomings and successes as he spoke about the Institution’s partnerships with local and national organizations and outreach efforts.

Hill began by laying out his desire to return Chautauqua to a position of “national thought leadership.” In the current political and social climate, he said, that means looking at how to put polarized communities back together around the country.

“Regardless of where we fall on political or faith perspectives, we can all agree that the country is struggling to talk right now, and Chautauqua is keenly interested in how it can serve as a model for that,” Hill said.

Part of effectively modeling community, according to Hill, is reaching past the physical boundaries of the grounds. Last year, the Institution began Chautauqua Online Grounds, a free internet archive of all the programs from the last two seasons that the Institution has been given permission to share.

The Institution also recently opened an office in Washington, D.C. to have a presence closer to other “thought leadership” organizations, like the American Enterprise Institute and the Brookings Institution.

In addition to furthering reach, the D.C. office is part of the Institution’s efforts to increase the viewpoint diversity in its programming.

“For those that feel like we’ve lacked balance on the (lecture) platform, my answer is ‘I agree with you,’ ” he said. “(The D.C. office) is part of us trying to figure out how to get access to those thought leaders that can help us do that.”

Hill also addressed the Institution’s relationship with surrounding areas, and what it’s doing to engage with those communities.

“Whether we like it or not, outside of the gates, we don’t have the best reputation,” Hill said. “I think some of that is because we’ve not engaged in ways we could.”

In an effort to reach more people from local areas, Hill said, the Institution has been trying to position itself as a regional cultural resource outside of the summer season. As evidence of steps forward, he cited the Winter Village, a free-admission initiative at Chautauqua early last winter, as well as arts and education programs that reached around 7,000 regional students between last January and May.

Chautauqua also has collaborative programs with local universities, according to Hill. This summer, he said, Jamestown Community College offered classes that involved Institution programming; students from St. Bonaventure University were on the grounds for five weeks; Kent State University’s Wick Poetry Center brought the Poetry Makerspace to the Institution: and the State University of New York at Fredonia gave all of their new faculty a tour of the grounds to make them aware of the Institution’s educational resources.

Finally, Hill said that the Institution is looking to use the grounds in the off-season as a convening place for both “major foundations and think tank-type organizations.” The Institution, he said, has both the infrastructure and resources to host thought leadership events sponsored by other organizations, and it would be a way to bring such programming to the grounds without having to pay for it.

There are also possibilities for hosting regional events, Hill said: Chautauqua County Executive George Borrello and Hill have discussed using the Institution as a possible place for things like local political debates.

Hill concluded by reiterating that the Institution is moving forward to bring its influence and resources outside the gates.

“All of this is to share that Chautauqua is really pushing and probing ways to be a better regional citizen and to be a part of the national dialogue,” Hill said.