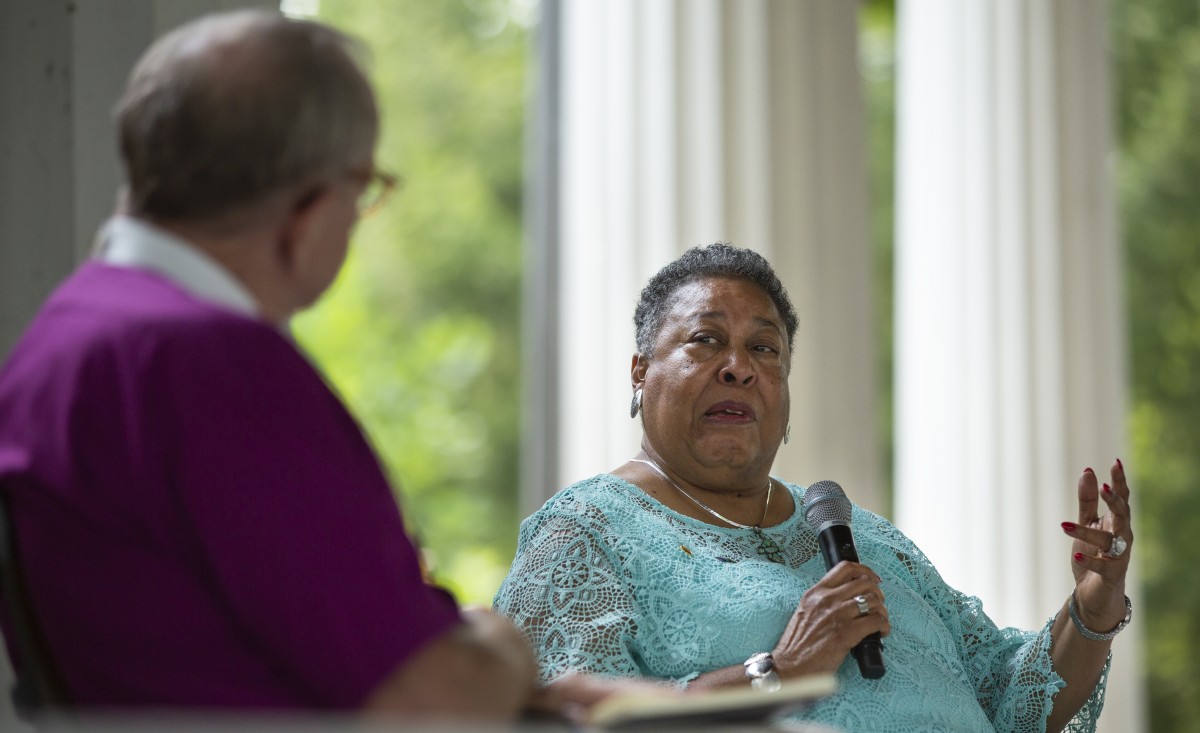 Clara Ester speaks during the Interfaith Lecture Series on Wednesday, Aug. 15, 2018 at the Hall of Philosophy. HALDAN KIRSCH/STAFF PHOTOGRAPHER

Clara Ester will never forget the look on Martin Luther King Jr.’s face as he lay beside her on the balcony of the Lorraine Motel. However, even 50 years later, she still can’t manage to describe it without nearly falling apart.

At 2 p.m. Wednesday, Aug. 15,  in the Hall of Philosophy, Ester gave her lecture, “Spirituality, Advocacy and Activism: an MLK-Inspired Life,” presented in conversation with the Rt. Rev. V. Gene Robinson, Chautauqua’s vice president of religion.

Ester, a retired deaconess of the United Methodist Church, is also the founder of People United to Advance the Dream. Her lecture was a part of Week Eight’s interfaith theme, “Not to be Forgotten: A Rememberance on Dr. Martin Luther King Jr.”

Ester has dealt with the effects of racism her entire life, but it wasn’t always clear to her that was what she was facing.

She grew up in Memphis, Tennessee, in an all-black neighborhood and attended all-black schools and churches.

“I could ride anywhere I wanted on the bus because the bus came to our neighborhoods to take us downtown,” she said.

Once she arrived downtown, she was always dropped off at the back door of her destination.

“We would enter and go down into the basement, never understanding that they had seven to eight floors in that store that we were not allowed to shop in,” she said.

When she was 5 years old, her mom took her and her brother to Chattanooga, Tennessee, to see Lookout Mountain. Because of her Native American ancestry, Ester’s mother could often pass as Caucasian, so when they arrived at Lookout Mountain, the employees said nothing to her. Ester believes this is only because they could not see her and brother at the time.

Once the family was inside the park, Ester and her brother went into the bathroom.

“It looked like a mansion,” she said. “It was spotless, clean, they had tables to change the baby, they had mints on the counter.”

But then the two of them were spotted, and Ester said the entire day changed.

“A gentleman came over to my mom with his nger in her face and said, ‘You know better,’” she said.

Therefore, Ester’s family left the park and went across the street to eat breakfast at a cafe, but Ester’s brother was forced to wait outside.

“My mother would not allow my brother to go into the cafe,” she said. “It was not the thing, in those days, for a young, black male, 7 years old, to look at a white woman.”

Ester said she remembers asking her mom what happened that first day in the park. But all her mother would say was “one day,” she would tell Ester.

Ester’s church pastor was James Morris Lawson Jr., a leader in the civil rights movement who advocated for the use of nonviolent tactics.

“Jim was into everything civil rights,” she said. “He even came back from India and shared with the staff and Dr. King the nonviolent concept.”

Ester said in the wake of the Freedom Rides, her church became a “holding ground” for travelers so they did not have to sleep on the highway at night. Many of them were white, and Ester and many others helped make food for them and their families.

“It allowed you to understand the urgency that some white people had for things that are not correct, for injustices,” Ester said. “There were young couples that wanted to stand up and say this was wrong.”

During her junior year of college, the sanitation strike began. It all started on Feb. 1, 1968.

There was a thunderstorm, but in Memphis, the Public Works Department required all of their black sanitation workers to continue working. That day, two sanitation workers, Echol Cole and Robert Walker, took shelter from the rain in the back of their garbage truck. As Cole and Walker rode in the back of the truck, an electrical switch malfunctioned, the compactor turned on, and they were crushed. The Public Works Department refused to compensate their families.

“What happened from that, from their death, was 1,300 sanitation workers stood up a week later and refused to go to work,” Ester said. “The strike took a very active role in the city. Can you imagine garbage not being picked up around here for a couple months?”

Lawson contacted King about the strike, and King came to speak with the sanitation workers. When he left, he promised he would return soon.

When King returned to Memphis on April 3, 1968, the first thing he was told was that there were threats against his and his wife’s lives. Ester said King declared those threats were meaningless to him.

“He talked about seeing the mountaintop and that we as a people will get there one day,” she said. “He said he was not afraid of anything because his eyes had seen the glory.”

As a way to get involved in the movement, Ester would leave school to prepare food for sanitation workers to take home. On April 4, 1968, a member of the church staff came into the room to invite everyone to get catfish that night.

Ester arrived at the Lorraine Motel grill for catfish, and King was exiting his room.

“He was laughing and talking to everybody and telling Ben Branch to play his favorite song, ‘Precious Lord,’ ” she said.

Then she heard the gunshot.

“I remember seeing people ducking and somebody hollering, ‘Get down, get down,’ ” she said. “The whole time, I was looking up.”

Ester said she doesn’t remember how she got there, but she arrived at the top of the balcony, stepped over King’s body and began to feel for a pulse.

“There was maybe something moving, but it didn’t appear that his stomach was even moving,” she said.

To aid his breathing, Ester unbuckled his belt and pants. She then asked for a towel to press against the wound on the right side of his neck.

The thing Ester said that has stuck with her all of these years later is the expression on King’s face as he lay beside her.

“He talked about the mountaintop and his eyes were open, and he had the most pleasant expression on his face because he was talking and laughing,” Ester said. “So his eyes are open, with a smile on his face. ‘I may not get there with you, but we as a people will get to the mountaintop.’ I will never forget his face.”

Ester said the church staff went to the hospital with King, but before they returned, she knew he was no longer with them.

Ester still does not believe it was solely James Earl Ray who assassinated King.

“I am not making a public statement saying this was a set up, but deep in my heart, how does a man who is in prison escape from prison and have enough money to stalk Dr. King in Atlanta, and then make his way to Memphis without some kind of support?” she said.

Ester said there are still many details that do not add up, and even five decades later, more details are still surfacing.

According to Ester, Lawson met with Ray on many occasions and even performed his jail cell marriage and, later, his funeral service.

At one point, Lawson told Ester that Ray did not do it.

“Will that ever change?” she said. “Who knows. Fifty years later, we are getting information. We are seeing the information the government holds on to.”

Ester said she struggled with hating white people after King’s death, but the lessons he left behind helped her heal.

“That hate started building up in me,” Ester said. “He changed my life because I could see those eyes; I could see them looking toward those pearly gates and saying we are going to get there and realizing we couldn’t get there through hate. How can I hate people and make this world any better?”

Apologizing for her previous animosity toward white people, Ester told the audience that she wants to work on creating a better world together, regardless of differences.

“We have to get busy building relationships, quicker and faster,” she said. “I have to love everybody in this room before I leave Saturday morning to start making a difference in this world. It has to be personal. Together, if we work together, we can change and make this world better.”