Reporter’s note: This week, Chautauquans will explore “The Forgotten: History and Memory in the 21st Century.” This theme offers the chance to remember three of an army of forgotten Chautauquans whose lives, like unseen rocks in a stream bed, shaped Chautauqua’s current yesterday and today. This week, a three-part series introduces or re-introduces three Chautauquans: Monday, artist Will Larymore Smedley; Wednesday, author and poet Rebecca Richmond; Friday, author, Chautauqua public relations czar and entrepreneur Julius King.

Residents and visitors may not immediately recognize their names, as neither street nor building exist in their honor. Born at the end of the 19th century, they lived most of their lives in the first half of the 20th century, that era of American energy and action. Their lives, talent and character suggest that they shared those national traits leavened by their unique, independent spirits. We remember them not because they were celebrated — they were. We remember them because they seem to be models of lives well lived, an idea that Chautauqua embraces and encourages. Sometimes the glory of lives does not pass, it just hides until called in from the dark.

Rebecca Richmond, author, poet, journalist and Chautauquan, would have loved Traveling Stanzas, the Institution’s partnership with Kent State University’s Wick Poetry Center. Though today’s iteration is different from the Sandwich Poets, which she formed and led nearly 80 years ago, Richmond would rejoice at poetry’s proud presence on the Colonnade first floor.

She would applaud the opportunity for visitors to try their hand at poetry composition and appreciate the exercise a visitor completes, which, by accident or design, reveals the power and malleability of the words that comprise the English language. Words were Richmond’s capital, and she was profligate.

Born in 1883, Richmond, a petite, gentle woman, was a force at Chautauqua. She composed history, biography, journalism and poetry, though it may be the title “poet” she cherished. According to Alfreda Locke Irwin’s Aug. 27, 1960, Daily article, Richmond was a writer who bloomed in her middle years.

“While Mrs. Richmond had always liked to write, it was not until after her boys were well grown that she was able to give time to it,” Irwin wrote.

Her residence at Chautauqua, beginning in the summer of 1928 till her death in 1961, was a fortuitous merger of space and time for both her and Chautauqua. Her muse was Chautauqua, and it would be the subject of her prose in one form or another until her death. Her first publication was A Woman of Texas, the 1941 biography of Anna Pennybacker, the epic Chautauqua Women’s Club president who served from 1917 to 1937. Richmond said that the biography was “something that ought to be done because of her importance and the historical span of her life.”

Chautauqua, An American Place, published in 1943, followed. Irwin, now considered Chautauqua’s historian, said that before the publication of Three Taps of the Gavel, Richmond’s history was “considered a standard reference for Chautauqua information.”

Richmond tipped her toes into publishing water with a pamphlet about Chautauqua, “Chautauqua in Brief,” published in the early ’30s, and evidently liked it. Both books and other pamphlets followed. A second “Chautauqua Summer” was written sometime before 1938,  Irwin writes.

In 1948 and 1953, Richmond joined illustrator June Kirkpatrick to create “Jubilee Sketchbook” and “Invitation to Chautauqua,” amusing yet informative pamphlets about Chautauqua — map included. She wrote for The Chautauquan Daily frequently and anonymously as CARIC for the Daily column, “Chautauquade.” “The Bell Tower,” a newsy Chautauqua update she wrote for the Chautauqua Society of Greater New York from 1938 to 1952, was printed six or seven times a year.

Her poems, generally not related to Chautauqua, were intensely personal. They were published in The Country Poet, Fiddlehead, The Husk, The New York Times, Pegasus, Poetry Digest, Quicksilver, The Stepladder, Voices and The Christian Science Monitor. Her Chautauqua anthem, “To Chautauqua — Moment of Farewell,” was printed frequently in the Daily and quoted on the Amp stage.

It might be over the top to call Richmond the “Eve” of the vigorous and expansive literary arts program which exists today, but it’s not unreasonable. In 1941, Richmond was named chairman of the CWC Co-operative Poetry Circle. She organized and led the popular Sandwich Poets and the Friday afternoon Poetry Circle, which led to the first Writers’ Conference and Workshop in 1947 and continues today.

We meet Rebecca Richmond, face to face, in the “Appreciations” of three poets: Robert Francis, Donald Hall and John Holmes, included in The Rock. This collection of her poetry was published posthumously by the Chautauqua Sandwich Poets and the Chautauqua Winter Poetry Circle. The poetry is moving. The slender, spiral bound paperback is a lesson in the impact that thoughtful but minimal illustration and layout adds to a book. But then again, no other than poet Donald Hall assisted “in arranging the manuscript for publication.”

Holmes, the first head of the Writers Conference, writes of Richmond’s effectiveness and leadership style. She was a practitioner of the “right word at the right time to the right people” school of getting things done.

“Her devotion was a source of power, of never failing amazement, all to come from that sweet-faced, discreet, hospitable, life-loving small person, quietly doing what she saw needed doing, saying what needed saying, to the right people at just the right time,” he wrote.

Holmes described his first meeting with Richmond when he came to Chautauqua.

“That small figure, with a girl’s shyness and eagerness, in a light summer dress and the black velvet ribbon she always wore around her head. … She was strong as well as modest, passionate as well as gentle and young forever in her outgoing,” he wrote.

Holmes remembers an example of that “young forever in her outgoing” when “one evening she and I went down to the lakeside and took a short flight in a small plane that could be hired. The thought of it scares me now. But it would be just like her.”

Hall met Richmond in 1958, the year he directed the poetry workshop. Needless, perhaps, to say, they formed a warm friendship. His comments offer an evaluation of her poetry.

“I think I valued most in Richmond’s poems that resolute honesty with which she pursued whatever subject or character she took up,” he said. “ ‘Cynthia Brook’ has always impressed me by this integrity — as well as by the skill of its rhyming.”

“That night she prayed, ‘Dear Lord, if only You

‘I’ll never ask you for another thing!’

She knelt till morning – and the Lord said, ‘No.’

They danced together on Ned’s wedding day,

In early fall she married a young Judge Brook,

Esteemed by some the godliest of men.

A foe of vice, espoused to righteousness,

He saw his wife a secondary bride,

For God was stern (she knew how stern) and they

Would labor in His vineyard side by side.

Was clearly marked for slow and painful death.

None thought it strange that near the end she gasped,

‘Does God, then, love those He chasteneth?’ ”

Hall would write “that not all the poems are perfect, as Rebecca Richmond was well aware. Some of them are utterly right and more important, every one represents the qualities of her spirit. There is a great dignity here, and a beauty which belongs to age, a beauty which is serene and at the same time profoundly aware of suffering.”

Hall adds, “she seemed to have a kind of grandeur of understanding.”

Francis, who also directed the Writers’ Conference, describes The Rock as a view into Richmond, the person.

“Here is her mind, her spirit. Here are her love and understanding of people, her wit and laughter. Here too is her reticence. The feeling for form, for good form, that shapes these poems shaped her life,” he wrote.

Richmond’s support of the Bell Tower Scholarship program after World War II cannot be ignored. Hall’s opinion was that this was “her most impressive contribution to Chautauqua.” The scholarship program supported the six- week visit of two young English teachers. The program lasted from 1948 until 2006.

Richmond lent her formidable personal support to the Chautauqua Literary and Scientific Circle (from which she graduated in 1930), the Friends of the Smith Memorial Library, the Chautauqua Women’s Club (where served as vice president and secretary) and was the first publicity chair of the new Chautauqua Art Association, formed in 1953.

Richmond buried her husband and three of her four sons. Francis would write “that so brutally many and such tragic blows should fall on this of all women, is one of the bewildering mysteries of life.”

Her poem “No Other Word,” one of her last, exemplifies Hall’s description of her “resolute honesty.” The poem was published in the 1959 Husk, a poetry and literature journal-magazine published by Cornell College in Mount Vernon, Iowa, two years before she died. If she was a master of words, their power and malleability, she also understood that there are words that cannot be pushed around. As we all learn, “death” is one of them.

“Death is a clean bold word and has no second meaning.

Death means an end. By sight, touch, temperature we know.

Do not insult this strong word with weak evasion

Speak not of the body and its lively grace

as paltry things that never mattered after all,

as being nothing but broken tools.

If you believe the soul, denied the dear familiar flesh,

finds other place to live, keep your faith,

but grant the body it illumined your candid grief.

Or, if you must believe that when the light went out

of eyes you loved and they stared back and told you

for that was all that could

Your fullest strength of

You shall not bear your

sorrow’s weight upon a crutch of words.

You will stand straight, nor say your lover, friend, your child

has ‘gone,’ as though he’d wandered off somewhere,

but speak with dignity and say, ‘He died.’ ”

A number of years ago, I saw a photograph of Richmond on the second floor of the Smith and wondered who she was. Now, I know, and it has been a joy to meet her, if only in the memory of others. I would disagree with Holmes’ opinion that her most impressive contribution to Chautauqua was the support of the Bell Tower program. I would say that Rebecca Richmond’s life and poems are her most impressive contribution not only to Chautauqua, but to all — wordsmiths or not.

The Rock book of poetry is available in the Chautauqua-Cattaraugus Library System.

CTC presents Shakespeare with a modern twist in ‘Into the Breeches!’ and ‘As You Like It’

Kent State President Beverly Warren to speak on lessons from May 4, 1970, shooting 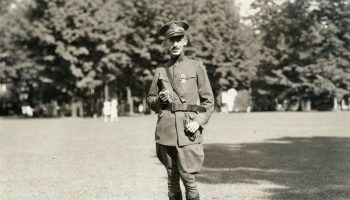