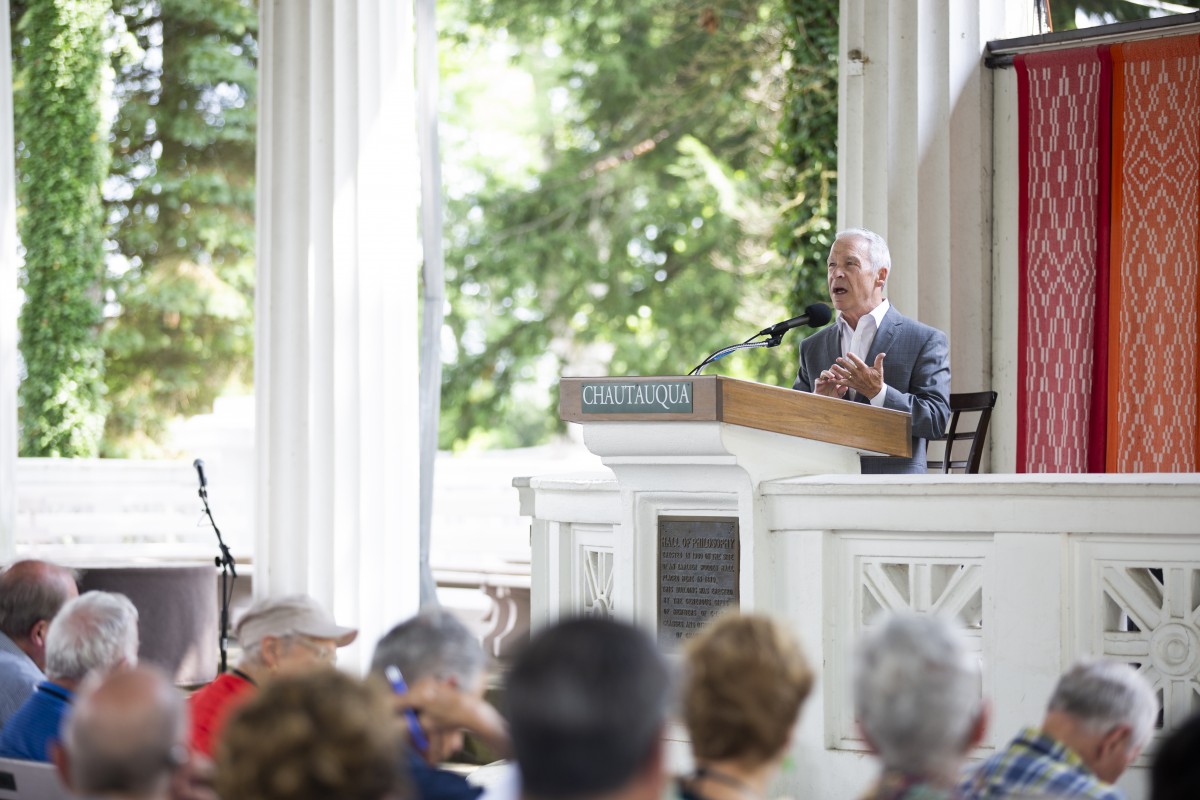 The Rev. Joel Hunter discusses Evangelical Christianity during the interfaith Friday lecture on Friday, August 17, 2018, in the Hall of Philosophy. ABIGAIL DOLLINS/STAFF PHOTOGRAPHER

In the eighth edition of the Interfaith Friday Series, the Rt. Rev. V. Gene Robinson, vice president of religion, moderated a number of questions with interfaith advocate Joel Hunter, who represented evangelical Christianity.

Hunter served as a spiritual adviser to President Barack Obama from 2008 to 2017. He served on the boards of the National Association of Evangelicals from 2004 to 2017 and the World Evangelical Alliance from 2006 to 2017. He participated in the Global Christian Forum in Bangkok, Thailand; the Parliament of the World’s Religions in Melbourne, Australia; the U.S.-Islamic World Forum in Doha, Qatar; and the United Nations Alliance of Civilizations in Madrid, Spain. Hunter was senior pastor of Northland Church in Longwood, Florida, for 32 years.

Now, Hunter serves as the chairman of the Community Resource Network, a nonprofit organization he founded that focuses on helping marginalized and homeless families.

What follows is an abridged version of Hunter’s conversation Friday in the Hall of Philosophy. Hunter and Robinson’s remarks have been condensed for clarity.

Just from a utilitarian perspective, we have problems in this world that are way too big — not only to solve with any one group, but even to move the needle with any one group. So if you are serious about any world problem — poverty, climate change, the marginalization of people, the persecution (of people) and so forth — we have to do that together. When I say together, I am not just talking about interfaith; I am talking about people of good faith and good will, people who have a basic humanitarian inclination that says, “I want everyone to be treated with respect, to be treated fairly.”

The second answer I would give to that is that the universe has been created in a complementary fashion. We see this in Scripture when God said, “It is not good for you to be alone.” We see this in the very nature and in the very ontology of God. But then he said, “I will make you a helper suitable.” In Hebrew, the word helper is “one who answers back.” Now, why did God do that? Not only because we are made in his image and were made for relationships, but there is a sense in which we only best operate in the midst of differences that can complement our deficiencies.

We see that all the way from quantum mechanics to the principle of entanglement. When two photons become somehow linked in a spooky universe, if you affect one, the other one eight miles away shows a reaction. So there is a principle built into our very creation of us being entangled together. In our faith tradition, there is a sense in which the church is made up of differences that fit together. We need each other, and that same principle is true in the world. Personally, we will not grow without befriending and advocating for people who are different than we are.

There is something that happens when you know someone who is different and you now have a friendship. When people talk to me about Muslims, they are not talking about Muslims in general, they are talking about my friend, Muhammad Muslih. Whatever they are saying better come out pretty well in that shape because this guy is my friend. There is something about this connection of differences that is really beneficial and we need personally.

When you come to the metaphorical interfaith table, what gifts do you bring as an evangelical Christian to that table?

Just Jesus. Jesus or God. I was walking with a monsignor and I said, “I will tell you, evangelicals are so thankful for the 200 years of Catholic social, theological development. We are leaning heavily into what you guys have already studied, we are with you, thank you.” He said, “I will tell you what, we could use your passion. We need your passion because we tend to live in our heads and in our rituals. We need to be fired up, and that’s what evangelicals can bring us.” So maybe we can bring some fire.

This is so fun for me because I go down my list of friends and I just see what they add to my life. So, Judaism is our mother religion, and you’re always nice to your mama. There is a sense of identity. There are observant Jews and non-observant Jews, there are believer Jews and non-believing Jews, but there is a sense of cultural belonging that they have, and there is a sense in which there is a kinship there. That is such a healthy thing. There are always a dozen (religions) that point out that the world is the enemy, but there is a resilience there that all of us would benefit from knowing, because a lot of us tend to get panicked when we just get poked a couple of times.

With the Muslims, there is an obedience there, a simple obedience and observance that is quite admirable.

With the Hindus, I love the inclusiveness of the Hindus. Hindus have never met a belief they couldn’t go, “Alright, I kind of like this.” There is this warmth and this friendship. If you hear an evangelical say, “Tell me what you believe,” it’s like we are already on alert, but a Hindu goes, “No, really, tell me about what you believe. I would be interested and maybe I could believe some of that, too.”

For Buddhists, there is this sense of, “Don’t throw all of your eggs in the basket of this world. Don’t think that just because something has happened in this world, it is the end of the world or the end of your life.” When Buddhists practice right, there is this healthy detachment. There are a lot of great qualities that all of us can learn from.

Yes. In John 14:6 (Jesus said), “I am the way and the truth and the life. No one comes to the Father except through me.” Don’t get all offended, or be offended, I don’t care. Yes, Jesus is the center of our universe. He is the creator of the universe. In the beginning was the word, the word was with God, the word was God, nothing was made if not made through him, and the word became flesh and dwelt among us. So he is the organizing principle of the universe.

There are two ways to interpret that Scripture. One is exclusively. If you’re not an active, believing, follower of Jesus Christ and have given your whole life to him, then you are going to hell. That is the exclusive way. If you can’t get to the Father, give it up, you’re going to hell.

There is another (interpretation), though. There are several Scriptures I could point you to that would be more inclusive in its interpretation and it gives room for “I haven’t had the opportunity to hear who Jesus is,” or they have lived in a world where that option was not a viable option for them. That is not to say that his death on the cross hasn’t also paid for those. Because remember what he said on the cross? “Forgive them Father, for they know not what they do.” Ignorance is a line of defense, and he was dying for those who were ignorant and pleading for their forgiveness at the same time.

So, yes. On one hand, I believe that all that is goes through Jesus Christ, but that does not necessarily mean that I think that everybody who doesn’t carry around the label of Jesus Christ is doomed.

Do you have extremist practitioners of evangelical Christianity?

I used to, and still do, defend my Islamic brothers and sisters when people accused Islam as a religion of terrorism. That can’t be any more possible than Christianity as a religion of KKK people. There is a great propensity for all of us to try to justify what we do through the use of Scripture and to somehow contort the natural meaning of Scripture into something that is not at all like Jesus. So we do have lots of folks now who are claiming to have Biblical backing, but remember, the devil knew Scripture. Those of you who are Christian, remember the desert temptation — it talked about the devil coming and quoting Scripture to Jesus in order to tempt him. Well, he still does. Those who are anti-God still use Scripture to justify what they are doing to make it seem like that is what God would want.