However, the needlework also represents a duality, for behind every thoughtful stitch and graceful pattern is the weight of struggle. Behind the exquisite artwork lies a hungry mouth to feed or a back aching from bending over the fabric and thread.

“I wanted to tell the world that the beauty before them, that the story cloths and the clothes are the consequences of art, art often created under dire circumstances, art that carries the pressure to feed families,” said Kao Kalia Yang, who will deliver her Chautauqua Literary and Scientific Circle Roundtable presentation at 3:30 p.m. Thursday, Aug. 9, in the Hall of Philosophy and discuss her book, The Song Poet: A Memoir of My Father.

Yang tells the story of her father, Bee Yang, a highly regarded master of Hmong song poetry. Bee Yang’s words capture the past and the rich Hmong traditions, telling of his community’s joy and sorrow, happiness and tragedies.

“I think that traditional song poetry offers the world an elemental and practical approach to art as a way of documenting and expressing communal experiences, from the traumas of war to the abuses of factory work,” she said, “and song poetry is a powerful vessel of shared emotions.”

According to Yang, the Hmong are the “most linguistically isolated group in America,” growing smaller every day. She grew up immersed in both her father’s “love and loneliness” for the Hmong language.

“The poetry of his heart, of our poverty, and his hopes surrounded me,” she said. “Long before I had any inklings of a life in writing, I learned how to love the beauty of language from my father.”

This refugee life, too, carried its sorrows and joys; after a grueling factory job and the passing of a matriarch, Bee Yang found his songs slipped through the cracks of memory. 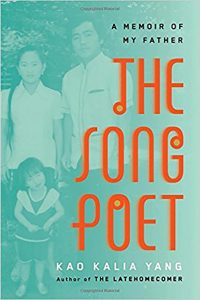 In The Song Poet, Yang embodies her father’s voice, singing the poetry he no longer can.

“We wanted to think about how arts and global understanding worked from another cultural perspective and, in this case, an immigrant perspective,” Griffith said.

The book was also a finalist for the 2017 Chautauqua Prize. According to Griffith, this meant the book would carry a “broad appeal” for the Chautauqua audience and speak to “how art can create understanding.”

Yang was 22 years old when she began writing her first book, a memoir titled The Latehomecomer.

“I was not convinced of my talent, but I knew I belonged to a powerful, important story,” she said. “The urgency of the story gave me a kind of fuel to stretch my abilities, to become better, stronger and more relevant than I ever knew I could be.”

When she began writing The Song Poet, she was similarly struck with that “sense of unknowing.”

“(Doubting if I was) good enough to do justice to this story held no chance against the mere fact of the story needing to be told,” she said.

Many writers get asked who their greatest literary influences are. Yang used to answer with the likes of Louise Erdrich or old Chinese poets.

It was not until she finished writing The Song Poet that she found her true answer: her father.

The book’s structure mirrors Bee Yang’s cassettes of his song poems, which he recorded in 1992.

Yang said The Song Poet serves as the second album, the record of Bee Yang’s voice and Hmong culture, that he was never able to create.

“In the writing process, I listened to lots and lots of song poetry to find the metaphors and intricacies of the form,” she said. “The strongest voice in the story, that of the song poet, is very much a product of my father’s poetry and his philosophies of life as expressed in his songs and in his everyday life.”

Traditional song poetry, according to Yang, is another tool for transcribing memory and fighting against the “erasure” of difficulties.

“It transcends the personal. It offers to us a perspective that is beyond the individual, an eye toward both our ancestors and our descendants,” she said. “Most importantly, in the Hmong context, is gives us a text where we can situate ourselves in an often undocumented and too often neglected history.”

After their immigration to America, Yang and her family were poor. Working conditions in Bee Yang’s factory gave him a persistent cough, and the moldy Minnesota house gave one of the siblings lead poisoning.

Despite this, Yang loved her home.

“I was a young woman of color who loved her people and the places she’s from, the housing projects, the falling-down neighborhoods, the long abandoned refugee camps,” she said.

While she has always held empathy, writing The Song Poet provided a mode for Yang to explore the emotion alongside her readers, she said.

“It was a canvas for me to try and paint the real experiences of first-generation Americans living in poverty,” she said, “to try to build more empathy for the often misunderstood newcomers, working in foreign languages, families without a homeland.

The Song Poet bookends important milestones in Yang’s life. She said she wrote the memoir as a young bride and completed it before the birth of her first child.

Through writing, she better understood her own parents’ marriage and how difficult it had been for them in the early days of their move to Minnesota when her mother and father worked opposing day and night shifts, missing each other dearly.

“This book helped cement my faith in my mother and father’s love and their marriage; it helped shape my own, gave it a fragility and preciousness I never expected,” she said.

At the time of writing, Yang’s husband was working on his Ph.D.

“Every day I would wake up beside my husband. … We’d have lunch together. We’d have dinner together,” she said. “We’d laugh and talk and sometimes argue, and in the space of remembering my mother and father’s long years apart, I stumbled upon their yearning.”

Like Hmong embroidery and song poetry, Yang bore her story inside herself for a long time.