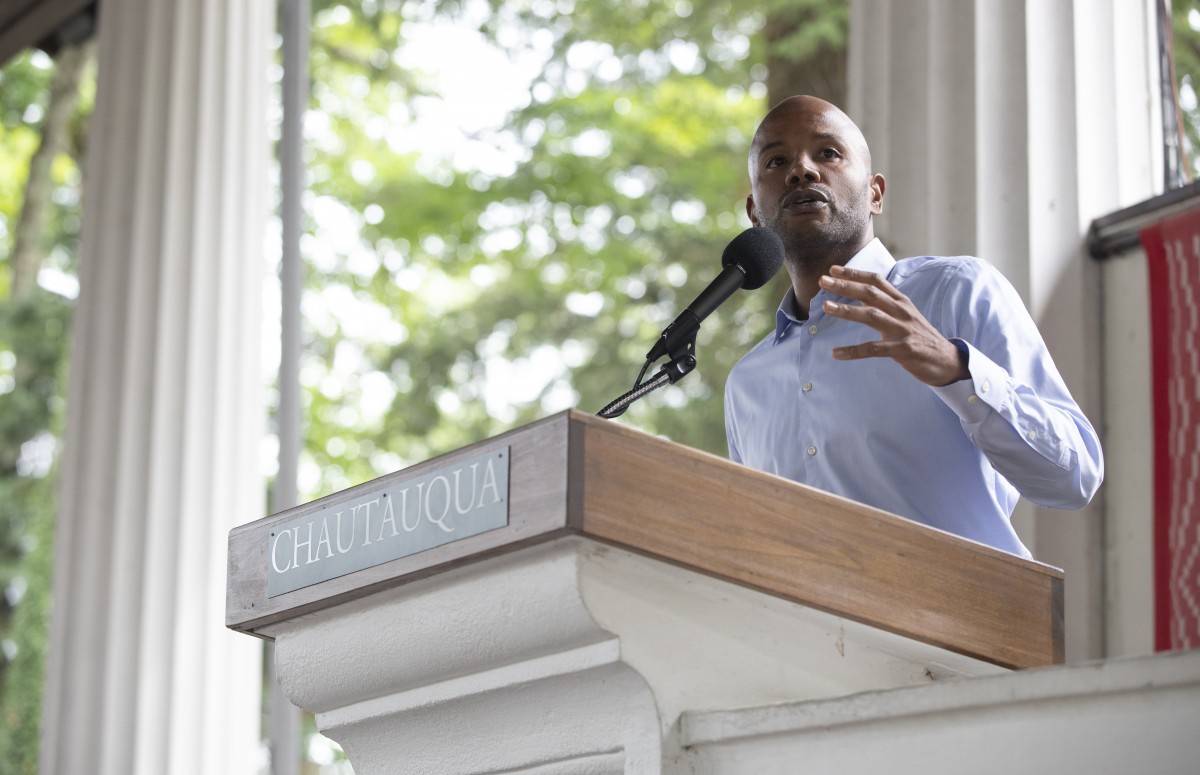 Peniel Joseph refers to his mother as his first historian.

As an immigrant from Haiti, Joseph’s mother raised him in New York City during the race riots of the 1960s. The city was afire with protests against racism and de facto segregation, but she refused to shield him from the flames. Standing with him on his first picket line at 9 years old, it was his mother, a black feminist, trade unionist and activist, who inspired him to create change.

At 2 p.m. Tues., Aug. 14, in the Hall of Philosophy, Joseph, the founding director of the Center for the Study of Race and Democracy at the University of Texas at Austin, gave his lecture, “The Passion of Dr. Martin Luther King Jr.: How the King Assassination Continues to Shape American Democracy,” as part of Week Eight’s interfaith theme, “Not to be Forgotten: A Rememberance on Dr. Martin Luther King Jr.”

“My mother believed in human rights and social justice with every fiber of her being, and she really tried to transplant that feeling and that belief in both of her sons,” Joseph said.

According to Joseph, the “heroic” civil rights movement took place from May 17, 1954, to Martin Luther King’s assassination on April 4, 1968.

“When we think about that heroic period of the civil rights movement, in a way — as Americans and even globally — that period unspools cinematically for all of us,” he said.

In 1954, the Brown v. Board of Education Supreme Court case decision declared separate public schools for black and white students to be unconstitutional.

In 1955, Emmett Till was murdered in Money, Mississippi.

In the same year, Rosa Parks and King, who served as a spokesperson for the Montgomery Bus Boycott, fought for the end of racial segregation on buses in Montgomery, Alabama, which they achieved in 1956.

In 1957, the Little Rock Nine, a group of nine African-American students, enrolled in Little Rock Central High School. Their enrollment was followed by the Little Rock Crisis, in which Arkansas Gov. Orval Faubus called in the state National Guard to prevent the black students from entering the high school. However, later that month, President Dwight D. Eisenhower sent in federal troops to escort the Little Rock Nine into the school.

The start of the direct action movement took place in February 1960. As a result of that, four black students from North Carolina A&T College sat down at a Woolworth lunch counter in downtown Greensboro, North Carolina. That sit-in movement expanded from four students to tens of thousands of people by spring.

Joseph said the most important part of the sit-in movement was that it became the “seed bed” for the Student Nonviolent Coordinating Committee.

In 1961, Freedom Riders rode interstate buses into the segregated South to fight for the enforcement of the Supreme Court decision in Boynton v. Virginia, which declared segregation of interstate transportation facilities, including bus terminals, unconstitutional.

“They are going to be violently repulsed by white supremacists and Klan violence,” Joseph said.

“Really the Kennedy administration, for the next two years, are grudging allies for the civil rights movement,” he said.

Kennedy started civil rights reform in 1963, nearly a decade after the beginning of the movement.

The year 1963 is also the centennial of the Emancipation Proclamation, and the Birmingham campaign.

“Birmingham, Alabama, is literally and figuratively on fire in 1963 at the prospect of not just racial segregation, but at the prospect of a movement for black citizenship that is not just led by Martin Luther King Jr., but by Rev. Fred Shuttlesworth,” Joseph said.

As a result of the Birmingham campaign protests, King was arrested and wrote the “Letter from a Birmingham Jail.”

“King talks about the consequences of white liberals and white moderation,” Joseph said. “He talks about his disappointment with white moderates and would-be allies who are more satisfied with peace at the expense of justice.”

Joseph said the greatest outcome of King’s letter is the connection he made between the civil rights movement and the founding principles of American democracy.

“(King) makes an argument that the core of American democracy should be racial justice and black citizenship,” he said.

Also in 1963 was the March on Washington, where King gave his famous “I Have a Dream” speech.

Joseph said the speech is only remembered by its last stanza, even though that was not King’s main point.

“That is a 17-minute speech where we have remembered to forget the most radical components of that speech,” Joseph said.

According to Joseph, the most radical component of King’s speech was the beginning.

“He starts by saying, ‘Now is the time to make real the promise of democracy,’ ” he said. “King is constantly talking about small-D democracy and connecting that to the ideas of racial justice, economic justice and peace.”

Joseph said it is important to remember that the events in 1963 not only affected black people, but their white allies as well.

“The racial terror that engulfed the United States transcends race, even as it focuses on black and brown people primarily,” Joseph said.

In 1964, the Civil Rights Act passed and outlawed discrimination based on race, color, religion, sex or national origin.

In 1965, the Watts Riots took place in Los Angeles, California, when Marquette Frye, a young African-American motorist, was pulled over and arrested by a white Highway Patrolman for suspicion of driving while intoxicated.

“(King) confronts groups and neighborhoods who are being assaulted by a criminal justice system that is a gateway to multiple systems of oppression,” he said.

Even though King was celebrated in previous years with honors such as the Nobel Peace Prize and Time magazine’s Man of the Year, Joseph said he started to be vilified in 1967.

“He is vilified as a troublemaker, as somebody who is fomenting violence, as somebody who is un-American and not a patriot because he is saying the triple threats facing the world are materialism, racism and militarism,” Joseph said. “King is talking about perpetual warfare in 1967 and guess what? Fifty years later, we are a country that is in a perpetual state of war.”

Additionally, King spoke out against the Vietnam War in 1967 in a speech titled “Beyond Vietnam” in front of 3,000 people at Riverside Church in New York City.

“(King) says that it is going to be a ‘bitter (but) beautiful struggle,’ but the only way to achieve racial and economic justice domestically is to stop exporting violence overseas in the name of freedom,” Joseph said.

In 1968, King was trying to organize 1,000 sanitation workers who were on strike in Memphis, Tennessee, when he was assassinated.

Joseph said when looking back on the 50 years following King’s death, one must pay attention to how the “juxtapositions have grown.”

“We live in a country that elected the first black president in 2008, yet at the same time, Barack Obama presided over a criminal justice system where you had a disproportionate amount of black and brown women and men engulfed in the belly of the beast of that system,” he said.

Another example of a juxtaposition under and since Obama’s leadership is the resurgence of hate groups such as the Ku Klux Klan. According to Joseph, the most prominent example was the Unite the Right rally in Charlottesville, Virginia, organized and comprised of white supremacists.

In the midst of those modern-day juxtapositions, Joseph believes America is still democracy’s best hope.

“We are still the last, best hope on earth for social and political transformation, for racial and economic and gender and LGBTQ justice, for human rights,” he said. “King imagines a democracy capacious enough to include and to place at the center the most marginalized, dispossessed, humiliated and disparaged among us.”

Joseph said it is King’s example of optimism that encourages him to keep his faith.

“What is so important for us is that we remain hopeful and are committed to doing the work that King was unable to finish,” Joseph said. “He provides us so much optimism in expanding our vision of what is possible. There is an alternative that is possible.”