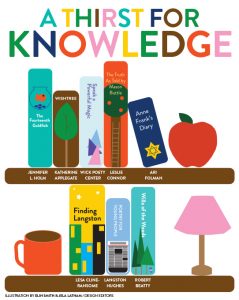 There is a strong sense of intergenerational community throughout Chautauqua, and nowhere does it seem more rooted than the CLSC Young Readers book list.

Programmed by Karen Schiavone, manager of Special Studies and youth programs, the list includes overarching themes and ideas for children ages 9 to 14 from week to week throughout the season.

The program aims to include a younger audience in the lifelong learning that can happen at Chautauqua. CLSC Young Readers allows for children to learn and participate in the important discussions that go on around the grounds at their own speed.

Schiavone said she wanted to target a slightly more mature crowd by choosing graphic novels and other books to maintain interest among young children, middle-schoolers and teenagers. This is exemplified in Week One’s selections, Number the Stars by Lois Lowry and Anne Frank’s Diary: The Graphic Adaptation by Ari Folman.

“The ultimate goal being that if a family is here together for the week, and mom and dad and grandma and grandpa are reading about some moment that changed the world, that our young readers can also be reading,” Schiavone said. “In this case, this year they’ll be reading about the Holocaust, which is a moment that changed the world, so that hopefully parents and grandparents and kids can all come sit around the dinner table and have a conversation together about a similar topic.”

Week Two sees the theme of “Uncommon Ground: Communities Working Toward Solutions” and with it, Wishtree by Katherine Applegate, a book about acceptance and community across race and religion.

As the season continues, so does the book list, with literature such as The Fourteenth Goldfish for Week Four, a novel by Jennifer L. Holm revolving around the idea of health, longevity and the miracles of medical science and imagination. The CLSC Young Readers book list is not meant to speak down to or simplify topics for the younger audience, but encourage their sense of interest and thirst for knowledge throughout the weeks, according to Schiavone.

In Week Seven, “Grace: A Celebration of Extraordinary Gifts,” young readers will dive into The Truth as Told by Mason Buttle by Leslie Connor, which follows a boy’s struggle with learning disabilities.

Books of all sorts are included this year, with Week Five featuring the poetry collection, Speak a Powerful Magic, published by the Wick Poetry Center at Kent State University, which consists of material from 10 years of the Traveling Stanzas Poetry Project. Week Nine features an adaptation of Langston Hughes’ poetry, Poetry for Young People for the theme, “Exploring Race and Culture in America.”

Each Wednesday this season, an event related to the reading for the week will occur at 12:30 p.m., with locations to be announced.