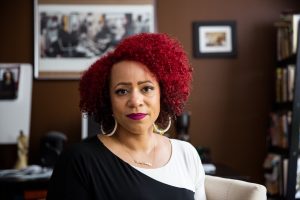 Broadcast in all-caps at the top of her website, a quote from award-winning investigative journalist Nikole Hannah-Jones sums up her oeuvre in her own words.

Heralded by The Root as having both the “poignant genius of Ida B. Wells and the effervescent fierceness of Beyoncé,” Hannah-Jones will give her morning lecture at 10:45 a.m. today in the Amphitheater.

Hannah-Jones is a domestic correspondent for The New York Times Magazine. Her reporting focuses on civil rights activism, specifically systemic housing and education injustices in the United States, and has earned her a National Magazine Award, a George Polk Award and a MacArthur “Genius Grant” Fellowship.

On Dec. 14, 2014, four months after Ferguson police officer Darren Wilson fatally shot 18-year-old Michael Brown, Hannah-Jones wrote about Brown’s school district in “How School Segregation Divides Ferguson — and the United States.” This story would also serve as the subject of an Aug. 7, 2015, episode of the podcast “This American Life,” for which she won a Peabody Award.

Committed to promoting diversity in newsrooms of the future, Hannah-Jones co-founded the Ida B. Wells Society for Investigative Reporting with three other black journalists in 2015. The organization, named for one of Hannah-Jones’ heroes — she is “Ida Bae Wells” on Twitter — provides training and mentorship to investigative journalists of color.

In an interview with Daniel Yadin for The Politic, Hannah-Jones spoke about how journalists have the opportunity to shape a more just world, noting that she thinks it is the role of the press to “afflict the comfortable, to make those who are comfortable … think about what that means for other people’s children.”

“I think that (journalists) choose this profession for a reason,” Hannah-Jones told Yadin, “because we believe in justice, and we believe in fairness, and we report to try to bring a society where more of that happens.”

On June 9, 2016, The New York Times Magazine ran a feature by Hannah-Jones that united the political nature of her body of work with her personal life as the parent of a black daughter. In the story, titled “Choosing a School for My Daughter in a Segregated City,” Hannah-Jones outlined, through extensive research and reporting, how racial segregation continues to plague American schools more than 60 years after Brown v. Board of Education.

“Legally and culturally, we’ve come to accept segregation once again,” Hannah-Jones wrote. “Today, across the country, black children are more segregated than they have been at any point in nearly half a century.”

Hannah-Jones’ book on school segregation is forthcoming in 2020.

According to Matt Ewalt, vice president and Emily and Richard Smucker Chair for Education, Hannah-Jones was an ideal lecturer for Week One.

“As we began planning for ‘Moments That Changed the World,’ and thinking about how such a week should stimulate critical conversation around how we reckon — or fail to reckon — with our history, it was essential to examine 1619 and the legacy of racism in America,” Ewalt said.

In August 1619, the first known enslaved Africans arrived as cargo on the shores of an English-speaking colony. So began more than two-and-a-half centuries of the trafficking of bodies across the Atlantic and within what would become the United States, creating a racial hierarchy. In her lecture, Ewalt asked Hannah-Jones to comment on the broader Week One theme with reference to that pivotal date.

“Nikole Hannah-Jones examines that legacy through her investigative reporting and by reflecting on her own experiences, spotlighting the segregation and inequality in today’s schools and calling out our reluctance to talk honestly about our history,” he said.