Rabbi Sharon Brous: ‘Antidote to Loneliness is Power of Presence’

“Loneliness is not about being single but about being alone, an inner state of being. It is a most painful condition,” said Rabbi Sharon Brous at the 9:15 a.m. Tuesday, June 25 Ecumenical Worship Service in the Amphitheater. Her sermon title was “The Amen Effect: I Can’t Heal You but I Can See You,” and the scripture was Genesis 2:15-25.

Brous cited some psychological studies about yawning, in which scientists played videos of people yawning on screens in football stadiums to see how people would respond.

“We are hardwired to connect,” she said. “It reflects an innate empathy. How many of you have yawned as I have been talking about yawning? These are the empaths in our midst.”

Some of the loneliest people Brous knows are partnered and have very active social lives.

Brous recalled Janis Joplin saying that she had just made love to 25,000 people at a concert, but was going home alone. A rabbi had just made a class of 200 cry and said “now I am going home to cry alone, but they got to cry with each other.”

Everyone experiences loneliness, Brous said. It can be acute and short-term or an existential loneliness.

In the scripture readings for the morning, God had created all life and called it good. God then created a man and called that creation very good.

“What is not good, the only thing called not good, is aloneness, loneliness,” Brous said.

Loneliness can drive us to self-sabotage that chips away at our ability to self-regulate and only amplifies our loneliness.

Brous cited the late John Cacioppo, a University of Chicago professor and psychologist who studied loneliness and concluded that it affects human physical and cognitive health, and is more destructive to the human immune system than obesity and smoking.

God said that it was not good for the man to be alone and so God created a partner for him. This is not a spouse but a helpmate, one who will break into the man’s dark moments and offer presence.

“A helpmate could be a sister, partner, teacher or friend,” she said. “The man is not alone because the woman is there.”

The Jewish tradition believes that people are relational beings. Brous cited a section of the Mishnah with a legal code for how to make a pilgrimage through the Temple Mount.

Everyone was to come in one gate, turn to the right, walk around the perimeter and go out the same entrance. But some people would turn left rather than right, and walk against the flow. This was a person to whom something awful had happened.

Then everyone who had asked “What happened?” would give a word of consolation.

“Those who were engaged in religious ritual were forced to confront someone who had experienced loss, to see a person who was shattered and help that person feel the presence of holy community,” Brous said.

Brous told the story of Rabbi Yochanan, a man of great empathy and physical beauty. He was not afraid to go to the sick and touch their hands when everyone else would leave. He would take the sick person by the hand and ask “Would you like to be lifted up?” If the person said yes, he would enable them to stand, a kind of spiritual healing.

When Yochanan himself got sick, another rabbi asked if he wanted to be lifted up and Yochanan accepted his help.

“A prisoner cannot free himself,” Brous said. “We all need someone to help us walk toward healing. We who are healers find it hard to accept help when we need it and we won’t ask for it.”

At the Sunday morning worship service, the Rt. Rev. V. Gene Robinson prayed for a family from Brous’ congregation who had lost both children in a car accident involving a drunk driver.

“That is a grief so intense, who can break through?” Brous said. “It was another mother who shared the same loss who showed them how to live through the grief. We cannot magically make it disappear, but we can sit in presence with them until the light comes again.”

In the Hebrew worship service, when a mourner stands to say the Kaddish prayer, the congregation responds “amen” to the mourner. Saying the prayer is not about what the words mean, according to Brous; the meaning comes from the mourner saying “I am broken,” and the community saying: “Amen, I see you.”

A woman made it her life’s policy to always go to funerals, to show up, even if going meant she was inconvenienced. When her father died, she looked back into the congregation and was heartened to see a crowd of inconvenienced people at a funeral at 3 p.m. on a Wednesday.

“That is the stuff of life — doing good versus doing nothing; that is the battle of life,” Brous said. “We have to find the courage to ask what happened, to be of service in people’s time of greatest pain. The answer is showing up.”

At a Friday service at IKAR, the Los Angeles-based Jewish congregation and community Brous founded in 2004, two young members of the congregation got engaged in the middle of the service and then told Brous about their news. She was torn between celebrating with the couple and knowing that in the back corner was a man who was going through a rough divorce and had just lost his mother.

She announced the engagement and the community danced and sang and used a tallit as a canopy over the couple. She noticed that the man had gotten up and was holding one corner of the canopy. When she apologized to him, in case the celebration had caused him pain, he replied, “Are you kidding? It is so healing. They found love fulfilled. How could I let them dance alone?”

How do we stop our loneliness, break out of our pain?

“It begins by doing,” Brous said. By doing, we change what is going on inside of us — this is called molecular remodelling.

The Rev. George Wirth presided. Larry Cohen, co-president of the Hebrew Congregation, read the scriptures. The Motet Choir, under the direction of Jared Jacobsen, organist and coordinator of worship and sacred music, sang “The Eyes of All Wait Upon Thee,” by Jean Berger. The Edmund E. Robb – Walter C. Shaw Fund provides support for this week’s services.

Roger Conner to Speak on Marriott Crisis Management for CWC 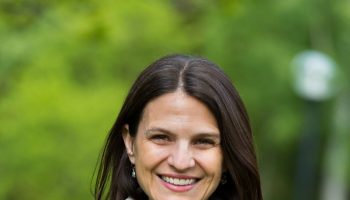 Rabbi Sharon Brous: “Religion is the Oxygen that Gives Us Fuel to Breathe”